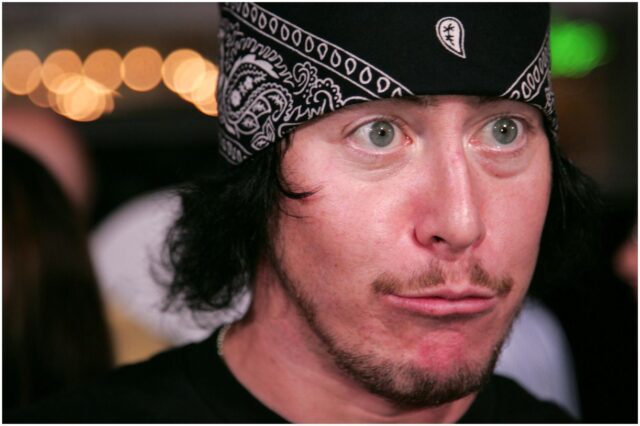 What is Danger Ehren’s net worth? Is Ehren McGhehey married?

Ehren McGhehey, nickname – Danger Ehren, is an American former professional snowboarder, actor, and stuntman who is best known for starring in the Jackass films.

Danger Ehren is also known for losing a tooth during a stunt.

He was born on November 29, 1976, in McMinnville, Oregon, USA, to Linda and Kenneth McGhehey. Ehren has two siblings.

He graduated from McMinnville High School in 1995.

He said for PageSix about the injuries he has sustained from doing the stunts:

”I’ve had many, many injuries from it – 25 surgeries including nine knee surgeries and three broken backs.”

Update – McGhehey posted on his Instagram account in October 2018 – ”having another knee surgery making it an awesome 11 knees and now 27 total surgeries.”

In 2006, he appeared in Jackass Number Two, while in 2010 in Jackass 3D (that also starred Chris Pontius, Brandon Novak, Margera, Dunn, Johnny Knoxville, and Brandon Novak). Both films were later accompanied by Jackass 2.5 and 3.5.

He was an executive producer on the movie All Hell Breaks Loose (2014).

From 2012 to 2016, McGhehey portrayed an unnamed motorcycle guy in five episodes of the sketch comedy television Portlandia.

In 2017, he appeared in one episode of Ridiculousness, a comedy clip show that is hosted by Rob Dyrdek.

Jackass 4.5 was released in 2022, with McGhehey appearing in the film.

There is no information on whether Ehren McGhehey has a wife or is dating anyone at the moment.

”Sometimes you eat the bar, and sometimes the bar eats you!”

”Life is a reflection on the past and an idea for the future.”

”You only get one body. Take care of it.”

He lost his tooth during the famous ”ToothPull” Lamborghini stunt (watch here).

”We had the idea of tying it off to Bam’s Lamborghini with fishing line and then ripping the tooth next to it out of my face,” McGhehey explained for WWeek about the ”ToothPull” Lamborghini stunt. Ehren later added: ”And I broke my face all the way up to almost my eye.”

He has also made some appearances on several TV shows like Grimm, Made in Hollywood, Ridiculousness, and Portlandia, and in a low-budget film – ”All Hell Breaks Loose.”

Therefore, American stunt performer Ehren McGhehey has an estimated net worth of $4 million.

READ THIS NEXT: Who is Cree Summer?