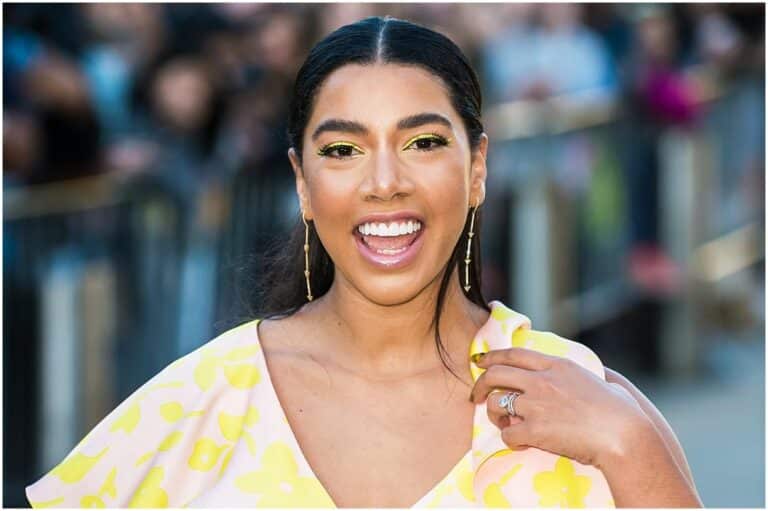 Hannah Bronfman is an American DJ, model, and entrepreneur, who co-founded the app, Beautified and founded beauty brand HBFit.

Hannah is a member of the Lehman family, a prominent family of Jewish German-Americans who founded the financial firm Lehman Brothers.

Her mother, Sherry Brewer, is an African-American actress who is best known for starring in Shaft.

Her father is billionaire Edgar Bronfman, Jr. who served as CEO of Warner Music Group from 2004 to 2011 and currently serves as a Managing Partner at Accretive LLC as well as the chairman of Endeavor.

Her parents divorced in 1991. In 1993, her father married Clarisa Alcock San Román. On January 21, 2011, he received a 15-month suspended sentence and a €5 million fine after he was found guilty of insider trading as Vivendi chief.

Hannah grew up as an aspiring ballerina. In December 2010, Bronfman graduated from Bard College with a degree in sculpture.

In another interview, Bronfman said: ”As a kid, I was around musicians and actors, so I think that I’ve always had a very musical influence.”

She stopped DJing in nightclubs since it took a toll on her health. Hannah said: ”I realized that my lifestyle wasn’t sustainable and I needed to make a change.” Bronfman added: ”I stopped DJing nightlife and moved into corporate DJing.”

In 2012, Bronfman co-founded Beautified, along with co-founders Peter Hananel and Annie Evans.

Beautified is an app that allows users to book last-minute services at beauty salons and spas in cities like New York, Miami, LA, San Francisco, Chicago, and Dallas.

She said to Teen Vogue: ”We went from concept to product in under one year. We really pride ourselves on our brand.”

In 2013, Hannah was featured in This is My Reality, a fashion documentary.

In 2014, Bronfman started a lawsuit against a co-founder of Beautified, Peter Hananel, for failing as a fundraiser, mistreating employees, using poor judgment, and depriving her of information in the bank account and computer system.

Later that year, Bronfman was a featured model at DKNY’s Fall 2014 Fashion Show.

In 2015, Hannah launched her own website HBFIT.com, where she shares recipe ideas and workout routines.

Also in 2015, she became a Clinique ambassador for their 3-Step System.

On January 8, 2019, Bronfman published a book, titled – ”Do What Feels Good: Recipes, Remedies, and Routines to Treat Your Body Right.” In the book, she provides insight on skincare to fitness and nutrition. Hannah said that the book is ”a download of everything I’ve learned across 10 years of my wellness journey.”

She got engaged to her long time boyfriend, Brendan Fallis, on August 17, 2015.

On May 20, 2017, Hannah Bronfman married Brendan Fallis in Marrakesh, Morocco. Hannah said to FQ about Brendan: ”I think one of the best things about him is how logical and resourceful he is.” Bronfman continued: ”He always has the best solution and generally knows how to resolve any situation.”

Fallis said about the wedding for W Magazine: ”Everybody is like their own celebrity the day of their wedding, because everyone wants to take photos of you and surround you with love and happiness.”

Note – Brendan Fallis is a New York City DJ and has managed rapper Theophilus London who released his debut LP in 2011. Brendan also started a YouTube channel in 2006.

About Her Daily Routine

”I get out of bed [8:00 AM], take my probiotics and I make myself a hot beverage – either hot water with lemon or matcha latte.”

”I’m one of those people who likes to work out on an empty stomach.”

”I’ll usually have a tall glass of water, around 17 ounces, and then I’ll drink throughout the day.”

”I am off my phone an hour before bed. I light a candle next to my bed every night.”

She is a member of the Platinum Collective.

Bronfman earned most of her wealth from being a co-founder of Beautified, an investor in multiple restaurants, and founding HBFIT.com.

Hannah has also worked as a DJ, opening for Alicia Keys, Justin Bieber, and John Legend. She said: ”I have DJ’d for technology, publishing, and fashion clients as well as Amazon, Spotify, and Fast Company.”

In 2018, Hannah and her husband listed their East Village triplex for $2.65 million. They bought the apartment for $1.6 million in 2004. In 2019, Bronfman and Fallis bought a new apartment in New York City. They uploaded a YouTube video about the apartment.

READ THIS NEXT: Who is Garrett Adelstein?