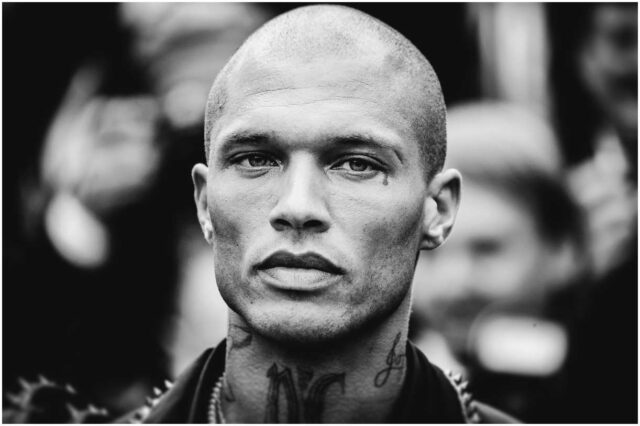 Jeremy Meeks (birth name – Jeremy Ray Meeks), dubbed the hottest felon, is a former member of the Crips (a gang based in the coastal regions of southern California) and a convicted felon who became a model.

His mother’s name is Katherine Louise Angier. He said about his parents:

”Both of my parents were heroin addicts. I was a heroin baby.”

In 2002, Jeremy was arrested and charged with a misdemeanor charge of resisting/obstruction of justice and for a felony charge of street terrorism.

Meeks also admitted that he was a member of the Northside Gangster Crips.

Jeremy was sentenced to serve two years in a California prison.

In June 2014, Meeks was arrested in a gang sweep in Stockton. Later, Jeremy was charged with one count of felon in possession of a firearm. He pled guilty in federal court.

In 2015, his smoldering booking photo was posted to the Stockton police FB page.

On March 8, 2016, Jeremy was released from Mendota Federal Correctional Institution.

Later, he signed with an agent thanks to his model-like features.

Currently, he is managed by White Cross Management – a talent management firm based in LA.

In June 2016, Meeks shared his first modeling headshot on Instagram

In February 2017, he made his runway debut at NY Fashion Week, walking for German fashion designer Philipp Plein.

In August 2017, Jeremy appeared in a campaign for Carolina Lemke, an Israeli sunglasses fashion house.

In 2020, he performed alongside Wesley Jonathan and Jordyn Woods in director Chris Stokes’ latest thriller ”Trigger.” Jeremy also portrayed Saleem in the thriller ”True to the Game 2.”

She said in an interview about his legal problems:

”He was incarcerated for a lot of his adult life before he met me.”

Melissa went on to say:

”I think his involvement with street gangs had something to do with wanting to feel he was part of some sort of family.”

Mellisa said in an interview:

”I know it takes two to tango but she knew he was married. To me, that’s unforgivable.”

”My whole world has been torn apart by this. What do I tell our children? My heart is broken.”

Note – Chloe Green is the daughter of Topshop boss Philip Green and the heiress of Topshop. In 2012, Chloe launched her own CJG shoe and accessory brand. Green was also a cast member on the reality television series ”Made in Chelsea.”

In August 2019, reports surfaced that Green and Jeremy Meeks have split up after two years together.

Chloe was later photographed with Monte Carlo polo captain Rommy Gianni. She said there was no romance between her and Gianni.

In September 2019, Jeremy said that he was still together with Topshop heiress Chloe Green.

”We are definitely together. Right now we’re in between Monaco and Los Angeles.”

”I have to travel a lot in order to see Chloe and my son.”

In February 2020, Chloe posed topless on the beach.

Melissa and Meeks have a son. She also has two kids from a previous relationship.

”We are pleased to announce the birth of our beautiful baby boy Jayden Meeks-Green. Born May 29th, 2018.”

”My childhood was very, very dark.”

”I just want them to know that this is really not me; I’m not some kingpin.”

His older brother, Emery Meeks, was arrested for robbery in 2000. Source

In 2018, Meeks appeared in the music video Wi-Fi by pop singer Olga Buzova.

Meeks earns most of his wealth from modeling and acting.

In February 2020, he launched his own fashion brand that includes accessories, leather goods, hoodies, sweatshirts, and t-shirts, that contain his initials. He said for Business Wire – ”The design team worked hard to reflect my vision and style in this first fashion series.”

He is sponsored by Fashion Nova Men.

During his divorce with Mellisa, she claimed that Meeks makes around $1 million per month.

Meeks performed in Dear Best Friend, True to the Game 3, and more.

Therefore, fashion model Jeremy Meeks has an estimated net worth of $6 million.

READ THIS NEXT: Who is Alexis Maas?