What is Giorgio Armani’s net worth?

”I am aware that I have achieved a certain resonance in the world and that I have done something significant and made people talk about me.”

Giorgio is of Italian-Armenian descent.

His father served as a shipping manager.

Armani studied medicine at the University of Milan’s Department of Medicine for two years. After, he left school for his military service.

In 1957, he found a job as a window dresser at La Rinascente, a department store in Milan.

In 1965, Giorgio started working as a designer at the fashion house Nino Cerruti. There, he met his future business partner and friend Sergio Galeotti.

In 1970, he released a collection of modified bomber jackets.

In 1973, Sergio persuaded him to open a design office in Milan.

In 1975, Armani formed his company. In the same year, Giorgio presented his first collection of men’s ready-to-wear for the Spring and Summer 1976.

Later that year, he received the Neiman Marcus Award for displaying the most unique service in fashion. 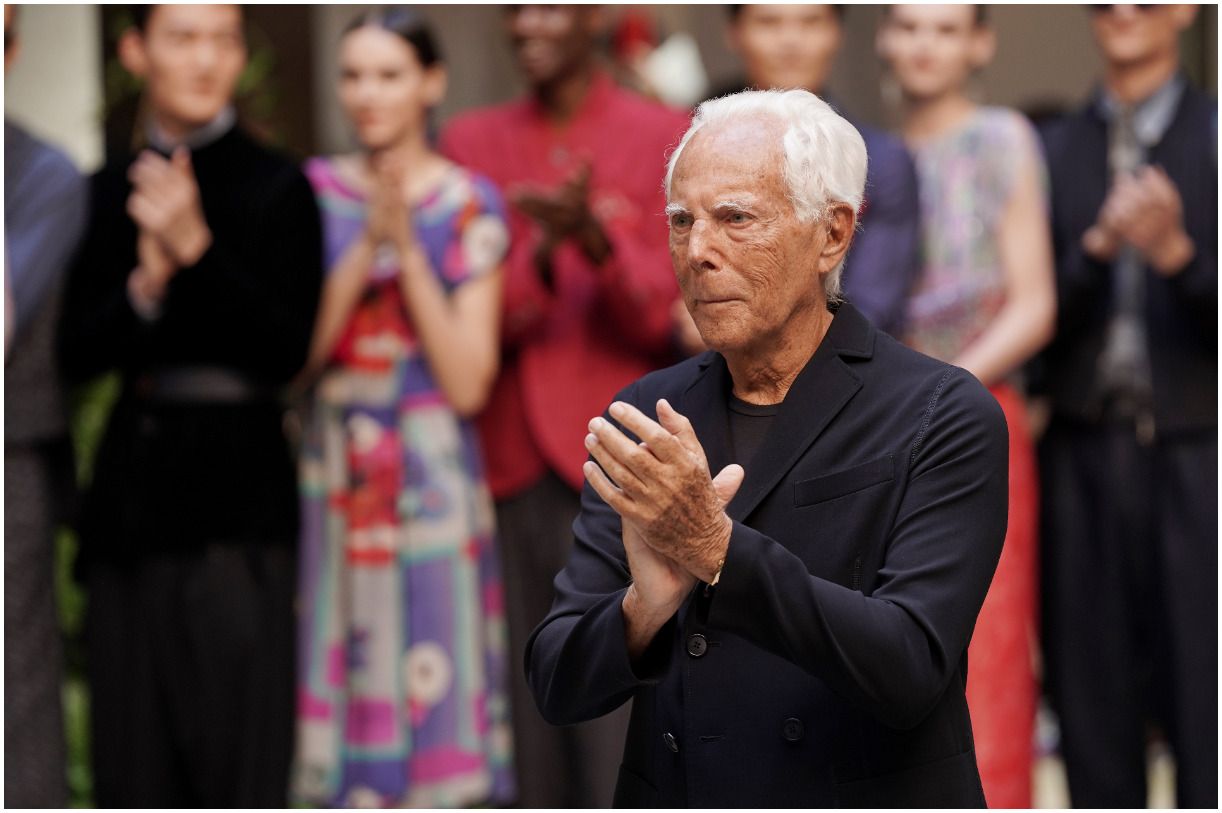 In 1985, Sergio Galeotti died of a heart attack in Milan. Armani said:

”He was the true spirit of this company.”

In 1988, he introduced a line of eyeglasses. In 1991, Giorgio was chosen by People magazine as one of the 50 Most Beautiful People in the world.

In 2006, he designed the uniforms for the Italian flag-bearers participating in the Winter Olympics Opening Ceremony.

In 2008, Armani was promoted to officer of the Legion of Honour.

In 2019, Giorgio began building a suite of luxury apartments above his NYC flagship store.

In 2020, Giorgio Armani’s AW20 womenswear show was kept behind closed doors, in an effort to avoid spreading coronavirus among attendees. The collection was live-streamed on Armani’s website and social media channels.

Armani had a longstanding relationship with Italian architect Sergio Galeotti.

Giorgio and Galeotti met in Forte dei Marmi in 1966.

Giorgio has publicly identified himself as bisexual. In a 2000 interview with Vanity Fair, Armani said:

”I have had women in my life. And sometimes men.”

He also stated in an interview that gay men “do not need to dress homosexual.” 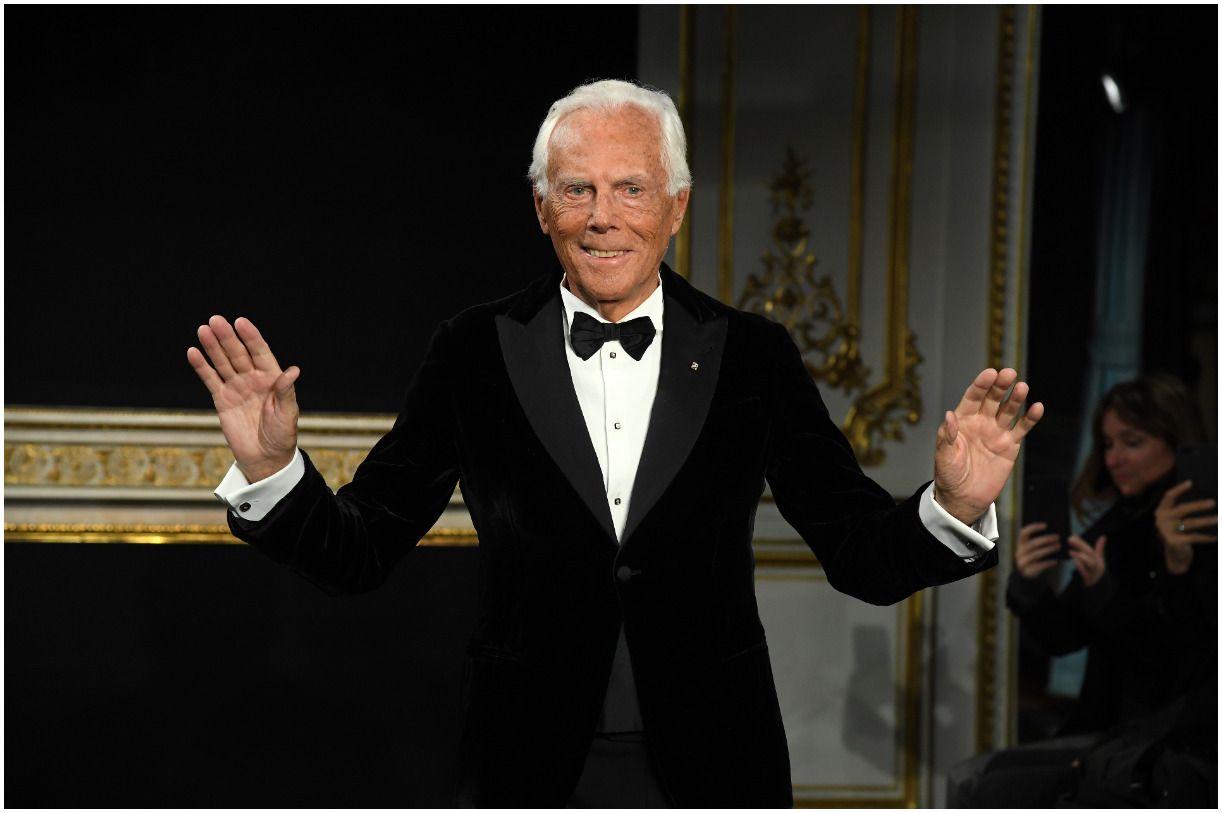 ”The way people style their homes is very much a reflection of their personality and lifestyle.”

”I am tired of hearing about trends. They are nothing.”

”It’s a defect that many designers have – Prada most of all.”

”I have one philosophy that can be expressed in different forms according to the people being addressed.”

”The exploitation of women in fashion imagery is not a new phenomenon, far from it.”

”I am demanding and possessive. I give a great deal to my friends, and I like to receive their loyalty and empathy in return.”

”The creative process involved in designing clothes and furniture is actually very similar.”

”I have given maximum freedom to women who can use all possibilities if they are sensible.” (Source)

”I love things that age well – things that don’t date, that stand the test of time, and that become living examples of the absolute best.”

Giorgio is credited with dressing Richard Gere in American Gigolo and Robert DeNiro in The Untouchables.

”In the lexicon of superheroes, it’s an honor to be associated with such an intriguing character as Bruce Wayne.”

He is a teetotaler, a person who does not drink any alcohol whatsoever.

Giorgio is a vegetarian. In a 2016 interview, he said:

”I am pleased to announce that the Armani Group has made a firm commitment to abolish the use of animal fur in its collections.”

”Technological progress made over the years allows us to have valid alternatives at our disposition that render the use of cruel practices unnecessary as regards animals.”

He has never smoked a cigarette.

He was the first designer to ban models with a body mass index under 18.

In 2019, he bought a $17.5 million penthouse in New York City. The four-bedroom apartment has over 3,000 square feet. The seller of the penthouse is the CEO of T-Mobile US, John Legere.

He owns a 213-foot luxury superyacht. The yacht’s style was inspired by military vessels.

Other famous fashion designers are Alexander Wang and Virgil Abloh.

Armani earned most of his wealth from managing his company – Giorgio Armani SpA. In a 1982 Time magazine article, his company had estimated annual sales of $135 million.

By the end of the 1990s, Giorgio Armani SpA had annual sales of roughly $2 billion and more than 200 stores worldwide.

Alongside clothes, his empire includes a sweets line, watches, make-up, perfumes, a nightclub, hotels, restaurants, and furniture. He is the sole owner of his empire.

In 2021, he became an official supplier to Scuderia Ferrari.

In 2019, Armani bought a historic Manhattan penthouse for $17.5 million

Therefore, Giorgio Armani has an estimated net worth of $6 billion.

READ THIS NEXT: Who is RaccoonEggs?