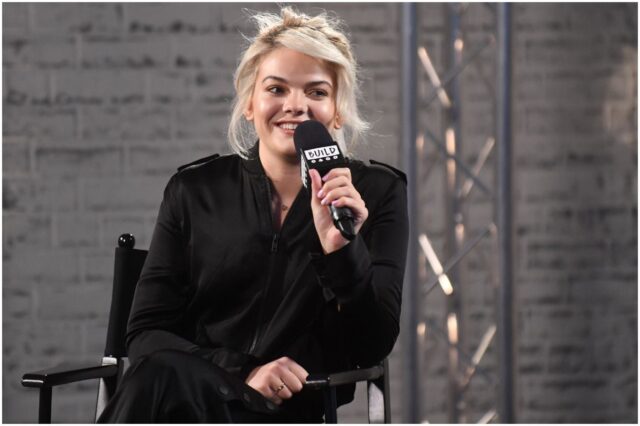 Louisa Johnson is an English songwriter, YouTuber, Instagram celebrity, and singer who first gained fame after winning the 12th series of The X Factor UK in 2015.

Johnson was born on January 11, 1998, in Essex, England, the UK, to Lisa Hawkyard and David Johnson.

Her mother is a driving instructor from Auckland, while her father is a construction worker from Essex. She has one younger brother named Fynn Johnson.

Johnson received a standing ovation from all four judges and progressed through to “bootcamp.” Louisa said that she chose this record since “it is a really, really hard song to sing, but I wanted to make a good impression.”

At “bootcamp,” the singe made it past the 6-chair challenge to “judges’ houses,” singing “And I Am Telling You I’m Not Going” by Jennifer Hudson.

She later advanced to the finals along with Ché Chesterman (a singer-songwriter from Basildon, Essex who studied music at college) and Reggie ‘n’ Bollie (a Ghanaian music duo that consists of Bollie Babeface and Reggie Zippy).

She had become the first winner in the Girls category since English singer Alexandra Burke in 2008.

During the competition, Johnson was mentored by Rita Ora (at the decision of the public), a Kosovo-born English singer who released her debut studio album, titled ”Ora,” in August 2012. Ora first rose to fame in 2012 when she featured on DJ Fresh’s single “Hot Right Now.”

During an interview, Johnson credited Ora for helping her stay grounded in the year following her X Factor triumph. She said:

”I think Rita inspired me the most, because she’s young too and we had so many ideas together.”

Louisa went on to say:

”She helped me a lot. She always told me to be myself, to remain strong mentally. I think it’s the most important advice anyone can give you.”

The day after her victory in The X Factor, she released “Forever Young” on This Morning (a  daytime TV program that is broadcast on ITV in the UK), Lorraine (a weekday lifestyle show for ITV that is presented by Lorraine Kelly), and Good Morning Britain (a breakfast programme on ITV). The single entered the UK Singles Chart on December 18, 2015, at number 9.

In November 2015, she appeared on the cover of Fabulous magazine.

The song reached the top 5 in the UK and in Scotland charts. In addition, ”Tears” was certified platinum by the British Phonographic Industry.

In 2016, Louisa was invited to take part in The X Factor Live Tour.

”So Good” was produced and written by Steve Mac. It received a gold certification from BPI and peaked at number 13 in the United Kingdom.

During an interview in 2016, the English musician reflected on her first year since winning The X Factor competition. She said:

”My year’s been incredible, I’ve had so much fun. I’ve done so much more than I ever thought I would do in my first year.”

”When I performed at Wembley Stadium it was a dream come true.”

On March 3, 2017, she released her third single, entitled – “Best Behaviour.” The song was written by Danny Parker, Shungudzo Kuyimba, and TMS. It was certified silver by BPI and peaked at number 48 in the United Kingdom.

The music video for the song was directed by Sarah Chatfield, and it was filmed in the desert of LA.

In 2017, Louisa featured on English singer Olly Murs’ single “Unpredictable,” that received a silver certification from BPI and peaked at number 32 on the UK singles chart.

In March 2018, Johnson released her 4th single, named – “Yes.” The single reached number 65 in the UK. Also, for the single, she collaborated with 2 Chainz.

In 2019, Johnson had a collab with Sigma (a British duo consisting of Joseph Aluin “Joe” Lenzie and Cameron James “Cam” Edwards) on the single “Here We Go Again.”

During a 2019 interview, Johnson confessed about her struggles with anxiety. The singer stated:

”I’ve always had anxiety and felt a bit low, but there comes a point where it’s, ‘ok I don’t feel low anymore I just feel a bit useless’ and I think social media does play a big part in that.”

In 2015, Louisa Johnson broke up with her school boyfriend, Ellis Stevens. During an interview, Ellis said:

”We split up because she wants to follow her dream.”

Just weeks after Stevens and Louisa broke up, she started to date Daniel Elliott.

Daniel and Johnson started to date while she was competing in The X Factor. Louisa said:

”We caught each other’s eyes and it went from there. I kept staring at him. I’m not discreet!”

In June 2017, Johnson revealed she was single again. She said about her relationship with Elliott:

”We’re no longer together.”

She is a supporter of the Premier League football team West Ham United. In 2015, Louisa visited West Ham’s Chadwell Heath training base.

Johnson earned most of her wealth from her music. So far, she has released four singles and several collaborations.

In addition, Louisa makes money from ads on her YouTube channels – her personal channel as well as a Vevo channel.

But, Johnson made most of her wealth from winning The X Factor (the winner receives a £1 million recording contract with Syco Music). She started a collaboration with USA Pro in early 2020.

Therefore, singer Louisa Johnson has an estimated net worth of $1.75 million.

READ THIS NEXT: Who is Arnel Pineda?