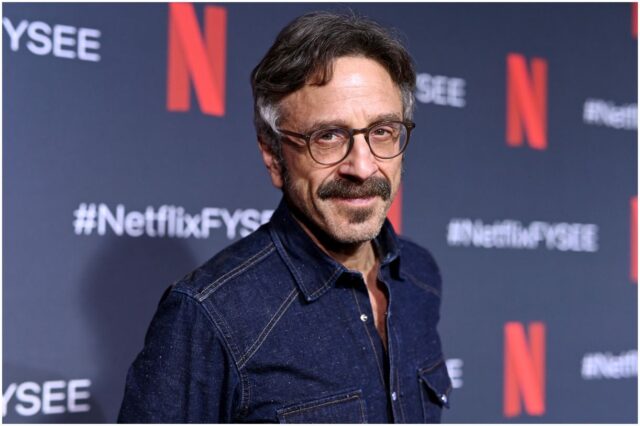 Marc Maron is an American actor, author, and stand-up comedian who starred in his own show Maron on IFC from 2013 to 2016.

But, he is best known for his popular podcast ”WTF with Marc Maron,” where Marc has in-depth conversations with comedy stars and other celebrities.

His stand up style is frequently compared to American stand-up comedian and actor Richard Lewis.

Marc once said about his childhood:

”From early on I really liked the stand-ups: Buddy Hackett, Don Rickles, Jackie Vernon. My grandmother was into that.”

He graduated from Boston University with a B.A. in English literature in 1986.

Marc began performing in the late ’80s out of the Comedy Store in LA.

In May 2008, Marc toured with Andy Kindler and Eugene Mirman in – ”Stand Uppity: Comedy That Makes You Feel Better About Yourself and Superior to Others.”

In 2012, Maron provided the voice of Magnus Hammersmith in 3 episodes of Metalocalypse, an American adult animated TV series that was created by Tommy Blacha and Brendon Small.

In 2013, he contributed a guitar solo to the charity single named – “Party at the NSA” by Yacht, an electropop music duo.

In 2017, Marc began starring in the Netflix series GLOW. In July 2018, Maron returned to his role for the 2nd season.

His portrayal of Sam Sylvia in the television series earned him both Critics’ Choice and SAG Award nominations.

In September 2009, he started his podcast “WTF with Marc Maron” out of his garage.

During a later interview, he said:

”I think the podcast monologues are really the most freeing, because I’m literally talking alone in the garage and have complete freedom on the mind.”

On his podcast, Marc has interviewed iconic personalities such as:

For his 1000th episode, Marc talked with Jane Fonda.

Maron said that his podcast:

“was really a way of me reconnecting with like-minded people – with people I’d known for years – and learning how to talk about problems and issues with friends and peers.”

In the present day, his podcast draws an average of 7 million listeners per month. In total, it has been downloaded more than 400 million times.

In 2009, it was ranked #3 Best Podcast by iTunes Rewind and skyrocketed to #1 on the iTunes comedy charts.

The US magazine Paste wrote of the episode:

“There has never been a more intimate interview with any president, ever.”

He frequently mentions having to ask his neighbors’ permission to station Secret Service snipers on their roofs during the podcast.

On April 30, 2013, he published his second book – ”Attempting Normal Hardcover.” David Sedaris said about the book:

“I laughed so hard reading this book.”

On October 10, 2017, Maron published another book, named – ”Waiting for the Punch: Words to Live by from the WTF Podcast.”

In 2004, Marc married Mishna Wolff, a former standup comedian. He characterized his behavior during their marriage as emotionally abusive. They divorced in 2007.

During an interview, Marc said about his second divorce:

”My second divorce was probably the most devastating thing I ever went through.”

”I do have some closure around all that stuff, but I can get back into that place.”

On February 10, 2014, episode of his podcast, Maron confirmed he was dating Moon Zappa, an American author and actress who published the novel ”America, the Beautiful,” in 2001. On May 1, 2014, he revealed that he was no longer dating Moon.

In 2019, it was reported that they had broken up. Later, he was in a relationship with Lynn Shelton until Lynn’s death (acute myeloid leukemia) on May 16, 2020.

”When I play by myself, I tend to get into some repetitions. And I tend to be in the sort of blues-rock world.”

”I’ve grown a little more confident in defending movies that other people don’t defend, masterpieces, and for why I think about them.”

”Somehow, I’ve managed to cultivate an audience of people who are not unlike me.”

”Most of my comedy writing happens through improvisation on stage; doing it in the moment.”

Maron earned most of his wealth from working as a stand-up comedian. Marc is a legend in the stand-up community. He has appeared on Comedy Central, Letterman, Conan, and HBO.

Therefore, American stand-up comedian Marc Maron has an estimated net worth of $3 million.

READ THIS NEXT: Who is Darren Hardy?