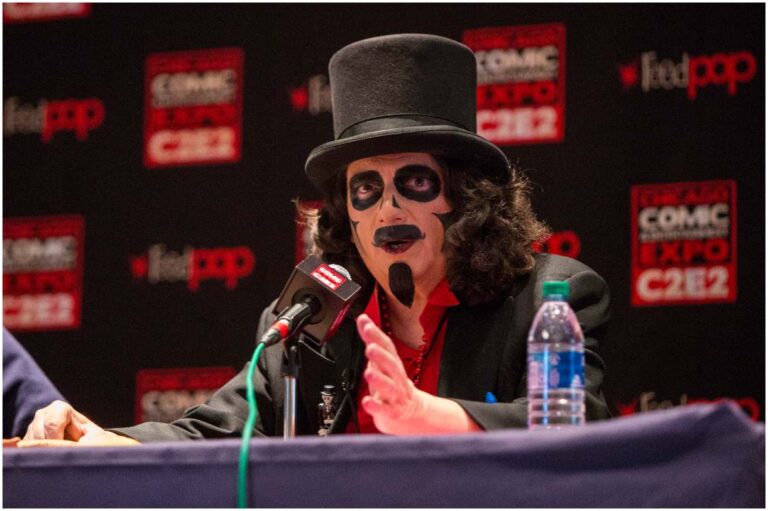 Rich Koz is an American TV show host who has broadcast for WCIU Chicago as host of The Three Stooges centric program Stooge-a-Palooza. But, Koz is best known for his horror movie hosting alter-ego Svengoolie.

“People really love horror movies. It’s one of the most entertaining things that people can watch…it’s like riding a roller coaster.”

”You get a lot of thrills and you get scared, but you know when it’s over with, you’re still going to be fine. I’m not tooting my own horn here, but I think the entertainment value we add to it makes it a complete experience.”

Koz first created the Svengoolie character while a student.

While Rich was at Northwestern University, he sent material for the horror-movie program to Jerry G. Bishop (a television and radio personality who is known for being Chicago’s original “Svengoolie”). Jerry subsequently invited Rich on to the show.

”In the late ’70s, Jerry moved out to the West Coast. He gave me his blessing to carry on ”the Svengoolie name” and in mid-’79 I managed to get “Son of Svengoolie” on the air,” he explained in an interview.

When the show was canceled in 1973, Rich and Jerry worked together doing mornings on WMAQ radio in Chicago.

In addition, Rich worked with Dick Orkin (an American commercial radio producer and voice actor who created The Secret Adventures of the Tooth Fairy as well as the Chickenman radio series) on commercials, including “ChickenMan Returns for the Last Time Again.”

When Jerry left for San Diego in 1978, he gave Rich permission to create a show known as ”Son of Svengoolie,” currently simply known as Svengoolie.

Rich began ”Son of Svengoolie” on WFLD in June 1979. In 1986, after the station was acquired by the News Corporation, WFLD canceled the show, as ”Son of Svengoolie” was not considered dignified for a network affiliate. After this, Rich did some freelance radio.

In 1995, he came back on the air as part of the launch team for newly independent station WCIU-TV, Channel 26. Rich became Svengoolie and resumed weekly horror movie shows.

In 2004, Rog joined Roger Ebert as a Silver Circle honoree for NATAS Chicago.

In the same year, Koz was inducted into the ChicagoMidwest Chapter of the National Academy of Television Arts & Sciences prestigious Silver Circle.

In 2019, Koz portrayed Dr. Rummage Goodwill in one episode of the TV series ”Cinema Insomnia with Mr. Lobo.”

In October 2019, it was announced that he will talk about his upcoming event celebrating four decades Years of Svengoolie at the Museum of Broadcast Communications.

Two months later he returned to work after undergoing two angioplasty procedures (it involves temporarily inserting and inflating a balloon where an artery is clogged).

”Maybe it’s a good thing that rubber chickens are cholesterol-free,” Rich joked about the heart attack.

In 2012, Koz was admitted to a Chicago hospital, where he was treated for another heart attack.

“After a very busy Halloween holiday season, I’ll be taking a short reprieve from updating my blog,” he posted on social media. ”Daily updates will return soon!”

”My second heart attack happened five years ago, like two days after Halloween,” Rich said in 2017.  He continued: ”My wife and I were watching TV, and all of a sudden, she says, I stiffened up and passed out. They had to use the paddles twice on me. They ended up doing a double bypass, then shortly after put in the pacemaker. But I was gone. Twice.”

Rich Koz is married, but the name of his wife was not discloused.

In the early 1990s, Rich ran a production called “The Koz Zone” that showed comedy sketches during the commercial period between Fox’s cartoons.

Koz has won numerous local Emmy Awards for his work in the Chicagoland area TV market.

He appeared as Svengoolie in a commercial for the Empire carpet company of the Chicagoland area.

Koz earned most of his wealth from his horror movie hosting alter-ego Svengoolie. In addition, Rich appeared in several commercials. Rich Koz’s salary was not released to the public, but the average pay for a TV host is around $100k per year. Therefore, TV show host Rich Koz has an estimated net worth of $1.3 million.

READ THIS NEXT: James Charles Net Worth