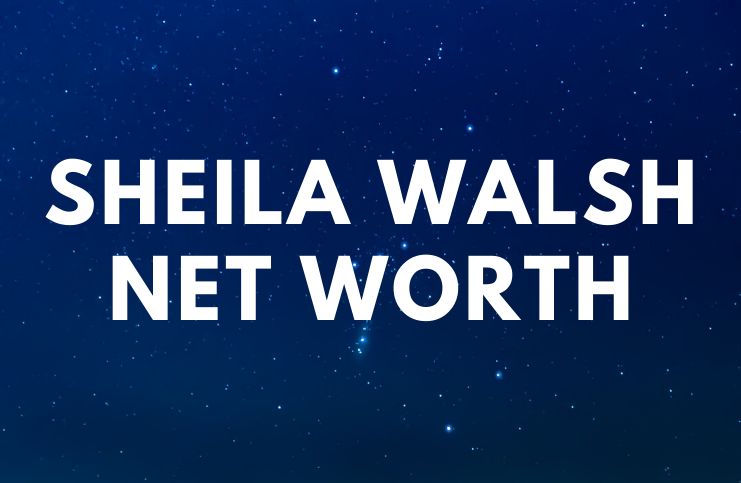 Sheila Walsh is a Scottish best-selling author, Bible teacher, and singer who released the albums ”Beauty From Ashes” in 2012 and ”I Hear Angels” in 2010.

In addition, Walsh is a featured speaker with America’s largest women’s conference, called – ”Women of Faith,” with over 3.2 million women in attendance.

She was born on July 5, 1956, in Glasgow, Scotland. During an interview, Sheila said:

” You can probably tell by my accent that I might live in Dallas, Texas, but I was born on the west coast of Scotland, to a family who loved Jesus, which would not be unusual in America.”

Deprived of father’s love due to brain thrombosis (the presence of a blood clot in the dural venous sinuses), Walsh and her siblings received the care and faith of her mother, who helped in their physical and emotional growth.

Walsh studied theology in London Bible College and music at the London Academy of Operatic Art.

Sheila began her career as a contemporary Christian singer after finishing college. She worked as an evangelist with the British chapter of Youth For Christ and sang with a band known as “The Oasis.” In 1981, she went solo.

After she enjoyed some success both in America and the UK as a CCM musician, Walsh was asked by Pat Robertson (executive chairman, American media mogul, televangelist, politician, and former Southern Baptist minister) to serve as a co-host of his television talk-show, The 700 Club.

Walsh served as co-host of his television talk-show until 1992.

The 700 Club is the flagship television program of the Christian Broadcasting Network, airing each weekday in syndication throughout the US and available worldwide on CBN.com.

As of 2009, the first airing of the show in the morning has been preceded by a 30-minute show called ”700 Club Interactive,” that utilizes Internet user-generated videos.

After leaving Pat’s enterprises in 1992, Walsh sought therapy for her depression. In an interview, she said:

“If you have a brain tumor, you can show people an x-ray and they can see something physical and they’ll pray for you right away.”

“But if you have a mental illness, where they cannot see the lack of particular serotonin or whatever you need in your brain to be able to function well, people often put that down to a lack of faith and say, ‘If you’re a believer, you can do all things through Christ that strengthens you.’”

”You wouldn’t say that to a child who fell off a swing and broke her leg. You wouldn’t say, ‘Get up and walk, because you can do all things through Christ.’”

Sheila went on to write a book exploring her struggle with her experiences with her faith as a Christian and depression, called – ”Honestly.”

She also returned to college at Fuller Theological Seminary (a multidenominational Christian evangelical seminary in Pasadena, California) to take on doctoral studies in theology.

Moreover, Walsh has continued her musical career as a singer and songwriter and has recorded a few albums of traditional hymns arranged to a Celtic sound and Christian music.

Currently, she is the co-host of the television program Life Today, airing in Canada, the United States, Australia, and Europe with over 300 million viewers per day.

She is the author of the Gold Medallion Award nominee – ”The Heartache No One Sees” and the best-selling memoir ”Honestly.”

In 2006, she released a new line of books and videos for little girls titled – ”Gigi, God’s Little Princess” that won the National Retailer’s Choice Award. In 2007, Walsh published ”God Has A Dream For Your Life.”

Her newest book was released in 2018 and is titled – ”It’s Okay Not to Be Okay: Moving Forward One Day at a Time,” a book that helps women change the way they think about themselves, God, and their everyday lives.

In addition, Walsh shares that when she discovered “I’m not good enough and I’m good with that,” everything started to change.

Sheila Walsh was married to Norman Miller and spent 11 years with him before ending their marriage in a divorce in the year 1992.

Her book ”The Longing In Me” covers her first married life.

Sheila is now married to Barry.

Walsh and Barry have a son, named Christian Walsh, who was born in 1997.

Walsh was a member of the team “Women of Faith” on the second season of The American Bible Challenge (the series debuted on August 23, 2012) on GSN. She once said:

”When I work with Women of Faith, I probably talk to anything from 15- to 20,000 women a weekend. They are dying to hear somebody tell their story out loud and not self-combust, to bring all the secrets out of the shadow into God’s light and say, ‘You know what?”

”Here’s who we are, and here’s who God is. As you are, at this moment, you don’t have to tidy yourself up. Just come as you are, and God loves you.’”

Her favorite way to spend a day is working worldwide to feed the hungry, support missions work through the Life Today ministry, provide medical help to the sick, give water to the thirsty, and rescue girls and boys from sex slavery.

In 2005, she partnered with publisher Tommy Nelson to create a line of children’s books and DVDs, entitled – ”Gigi, God’s Little Princess.”

Walsh earned most of her wealth from singing and selling more than 5 million books. You can buy her books from her website or from Amazon. In addition, Sheila co-hosted The 700 Club, speaks to audiences around the world, and co-hosts Life Today. Therefore, Sheila Walsh has an estimated net worth of $3 million.

READ THIS NEXT: Who is Jonathan Jafari?