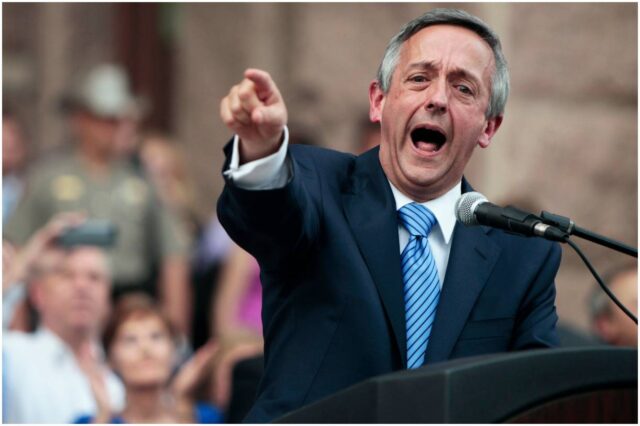 What is Robert Jeffress’ net worth?

Robert Jeffress is an American pastor of the First Baptist Church in Dallas, Texas.

The church also owns and operates several radio stations, a school, and a mission for the homeless on the southern edge of Downtown Dallas.

Jeffress obtained a BA from Baylor University in Waco, Texas, in the mid-’70s.

In 1981, Robert earned a Master of Theology, Dallas Theological Seminary.

In 1983, he obtained a Doctor in Ministry, Southwestern Baptist Theological Seminary.

From 1978 to 1985, Robert Jeffress served at First Baptist while also completing work on his doctorate at Southwestern Baptist Theological Seminary.

In 1986, he was a contestant on the syndicated nighttime edition of the popular game show Card Sharks, hosted by Bill Rafferty.

In 2010, Robert made some of his most inflammatory comments about Muslims when he said that Islam promotes pedophilia. Furthermore, Jeffress said that Islam was both “oppressive” and “violent” and that it is an “evil, evil” religion.

In 2011, Jeffress made headlines for saying that Mitt Romney’s Mormon beliefs contradict the teachings of Jesus. Mitt Romney is an American businessman and politician who has been serving as the junior United States senator from Utah since 2019.

On January 20, 2017, he preached the sermon at a private service at St. John’s Episcopal Church. Interestingly, this lecture was attended by President-elect Donald Trump on the day of the latter’s Inauguration.

In the present day, he is an adjunct professor at Dallas Theological Seminary.

He has two daughters (Julia and Dorothy) with his wife, Amy.

He is the author of 25 books, including:

On 29 September 2019, the pastor spoke out again to oppose the Democrat effort to impeach President Donald Trump. He said:

“I do want to make this prediction this morning: If the Democrats are successful in removing the president from office, I’m afraid it will cause a Civil War-like fracture in this nation.”

Later that day, President Trump tweeted a paraphrase of Robert’s words but removed the word “prediction” from his tweet.

He thinks that President Obama paved the way for the Antichrist. During an interview, Robert stated:

“For the first time in history, a president of our country has openly proposed altering one of society’s most fundamental laws: that marriage should be between a man and a woman.”

”While I am not suggesting that President Obama is the Antichrist, the fact that he was able to propose such a sweeping change in God’s law and still win reelection by a comfortable margin illustrates how a future world leader will be able to oppose God’s laws without any repercussions.”

Dr. Jeffress runs 3 miles on a treadmill five days per week and watches what he eats.

He has made over 2,000 guest appearances on various television and radio programs and often appears on major mainstream media outlets, like:

Additionally, Jeffress has hosted the religious television program, Pathway to Victory, which airs on more than 1,200 stations across the United States.

Established in 1996, Pathway to Victory serves as the broadcast ministry of Dr. Robert and the First Baptist Church of Dallas, Texas.

Their mission is to provide practical application of God’s Word to everyday life through clear, Biblical teaching.

On March 31, 2013, he completed the largest Protestant church building campaign in modern history, opening its new state-of-the-art $128 million campus. The church is considered one of the most expensive churches in U.S. history.

“Our dream was to create a spiritual oasis in the middle of downtown Dallas. We incorporated some of the newest technology available to offer an interactive worship opportunity unlike any other.”

READ MORE: Rod Parsley Shares the Battle Against His Mind

A church member had given the books to Robert, who refused to return them. Robert Jeffress also said:

In 2008, in his sermon “Gay Is Not OK,” Robert cited Romans 1:27 – “And the males likewise gave up natural relations with females and burned with lust for one another. Males did shameful things with males and thus received in their own persons the due penalty for their perversity.”

“But if you really believe there is only one way to Heaven, and it’s through faith in Christ, why wouldn’t I want to warn everyone I could?”

“If there really is no Hell, then it’s judgmental and unloving to tell people what they believe is wrong.”

“I grew up here, I was saved here, baptized here, ordained here, married here, preached my first sermon here, after which I served as the youth pastor here for seven years.”

“Surely, God doesn’t use pagans to bring judgment upon his own people, does he?”

Dr. Jeffress earns most of his income from working as a pastor and a professor, selling his books, hosting Pathway to Victory, and appearing in over 2,000 radio and television shows.

READ THIS NEXT: What is Imaqtpie’s real name?