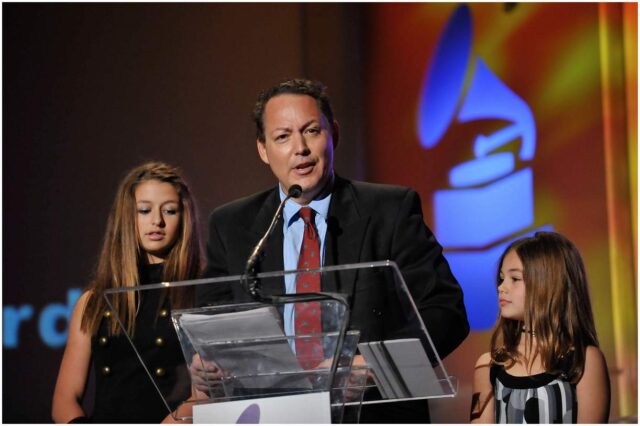 Dodd Darin (birth name – Dodd Mitchell Darin) is an American author and the son of Sandra Dee and Bobby Darin.

His middle name was given in honor of Sandra Dee’s press agent, Betty Mitchell.

Darin is the son of Bobby Darin and Sandra Dee.

During the late 1950s and early ’60s, Bobby and Dee were America’s sweethearts.

They met while filming Come September.

When they tied the knot, their marriage seemed like the perfect dream of any American couple.

But Dee and Bobby divorced in 1967 after she suffered from an addiction to alcohol and pills. However, the two stayed on good terms. Dee once said:

”We even lived together after the divorce.”

In 1962, Bobby won a Golden Globe Award for his film, ”Come September.”

Unfortunately, he died (after a six‐hour open-heart surgery) four days after his son’s 12th birthday in 1973. He was 37 years old.

During an interview, Dodd said:

“My mom never recovered from my dad’s passing.”

Darin went on to say:

“They were divorced and hadn’t been together for years but a lot of her died the day he died.”

Sandra Dee was an American actress who earned a Golden Globe Award in 1958 for her performance in Robert Wise’s Until They Sail in 1958.

In 1959, she appeared in A Summer Place as Troy Donahue’s teen girlfriend.

Her final film performance was in the drama Lost.

In February 2005, Dee died from complications from kidney disease in Thousand Oaks, California.

During an interview with Daily Telegraph, Darin said about his parents:

”When I was very young, both my parents made an effort to have a normal existence for me as much as possible.”

”For those who don’t know, my mum was also high profile at the time and they both realized that I was going to have my own life to lead eventually and they tried to keep it as normal as possible.”

In 1990, he accepted the Rock and Roll Hall of Fame award for his father.

The book chronicles his parents’ divorce (when Darin was six), the fact that his mother had been sexually abused as a child by her stepfather, his mother’s struggle with depression and anorexia using his rare photographs, letters, interviews, and his own memories.

Darin started to write the book in 1988 as a method to connect with his father and learn all about him.

In 2016, the book was translated into a musical that had its premiere in Sydney, reported ABC.

Dodd Darin got married to Audrey Tannenbaum on June 5, 1993.

She was the costumer on NBC’s Mad About You, an American sitcom television series.

The couple has two daughters, named Alexa Rose (born in 1996) and Olivia.

Both girls are into modeling.

A biographical musical drama film titled Beyond the Sea (based on the life of Bobby Darin) was released in 2004.

Kevin Spacey starred in the lead role. Spacey also used his own singing voice for the musical numbers.

The film grossed over $8 million.

Darin earned most of his wealth from royalties from his parent’s films and music. In addition, Dodd published a book that sold very well on Amazon (4.6 out of 5 stars with 151 reviewers).

His mother had an estimated net worth of $2 million, while his father of $5 million.

Therefore, American author Dodd Darin has an estimated net worth of $3 million.