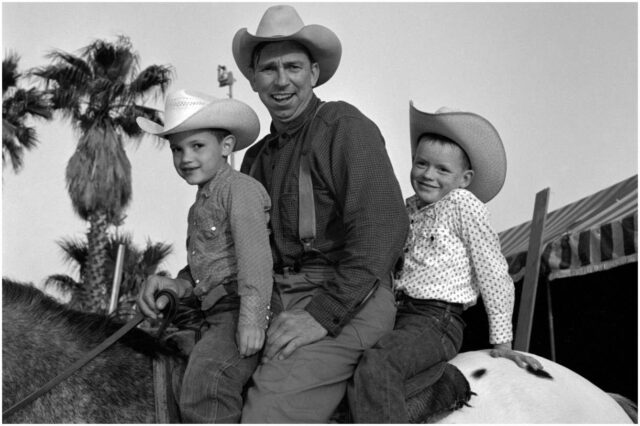 What was Slim Pickens’ net worth at the time of his death?

Slim Pickens (real name – Louis Bert Lindley, Jr.) was an American Western actor who is best known for appearing in The Sun Shines Bright, The Great Locomotive Chase, Eye for an Eye, Blazing Saddles, How I Learned to Stop Worrying and Love the Bomb, or Dr. Strangelove.

During the filming, Louis was able to drive a stagecoach pulled by a six-horse team or gallop his own Appaloosa horses across the desert and did not need a stand-in for horseback scenes.

His brother Samuel was also an actor, using the stage name Easy Pickens.

Pickens got his first horse when he was 4 years old. He attended Hanford High School in Hanford, California.

At age 12, Slim became a rodeo clown. At age 16, he dropped out of school to join a rodeo.

”My father was against rodeoing and told me he didn’t want to see my name on the entry lists ever again.”

Pickens went on to say:

”While I was fretting about what to call myself, some old boy sittin’ on a wagon said, ‘Why don’t you call yourself Slim Pickens, ’cause that’s shore what yore prize money’ll be.”

Before breaking into the film industry, he worked as a rodeo clown for nearly two decades. While he participated in rodeos, Slim specialized in wild horse racing, Brahma bull riding, and bronc busting.

During his rodeo career, Slim broke almost every bone in his physical body. He said:

“I had one side of my body X-rayed after I got throwed one time and it showed I had 17 broken bones on that side alone.”

In 1950, Pickens made his film debut in ”Rocky Mountain.” The film is set near the end of the American Civil War. It was directed by William Keighley.

In 1960, Louis appeared in the episode “Sour Annie” of ”Overland Trail,” an American Western series starring Doug McClure and William Bendix that aired on NBC from February 7 to June 6, 1960.

In 1975, Slim played the limping bank robber in Walt Disney’s The Apple Dumpling Gang. The film is based on the novel of the same name by Jack Bickham.

In 1979, Pickens appeared in Steven Spielberg’s 1941. The story of this movie involves a panic in the LA area after the December 1941 attack on Pearl Harbor.

In the same year, he voiced B.O.B., one of the main robot characters in the SF film ”The Black Hole.”

In 1982, he was inducted into the Hall of Great Western Performers of the National Cowboy and Western Heritage Museum.

The last film of his career was called ”Pink Motel (1982),” a sex comedy where Slim starred along with Andrea Howard and Phyllis Diller.

In 2005, he was inducted into the ProRodeo Cowboy Hall of Fame in Colorado Springs.

In 2006, Slim was inducted into the Happy Canyon Hall of Fame and Pendleton Round-Up.

Slim Pickens was married to Margaret.

The couple had two daughters, Maggie Lou and Daryle Ann.

“I plan to retire from the picture business only when they shovel dirt in my face. There’s no use retiring if you like what you’re doing and you’re making money.”

”As far as I’m concerned, acting is like a license to steal. I know of no occupation where, with less money invested, you can make so much.”

His strong physique, husky voice with a Texas-like twang, and big eyes were well utilized by Hollywood. Pickens appeared in over 150 television series and movies. A few of his most impressive acting credits include:

He also appeared in episodes of:

On December 8, 1983, Pickens died at a convalescent hospital in Modesto, California, US. He was 64 years old.

His funeral was held at Presbyterian Church of the Forty-Niners in Colombia.

“We will all miss Slim. He had a lot of friends here on Persimmon Hill.”

In an episode of CBS’s Hawaii Five-O, Pickens portrayed the patriarch of a family of serial killers.

Pickens earned most of his wealth from appearing in about 150 movies and TV shows, such as Filthy Rich, B.J. and the Bear, and The Legend of Custer.

Moreover, Slim worked for almost 20 years as a rodeo clown.

Therefore, at the time of his death, American actor Slim Pickens had an estimated net worth of $2.7 million (according to the current inflation rates).

READ THIS NEXT: Meghan Markle Net Worth