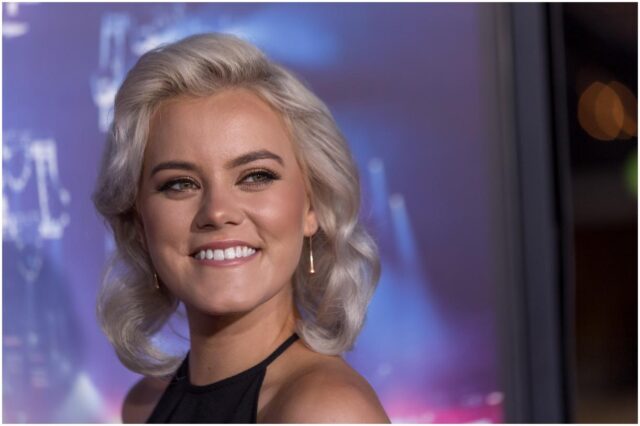 Taya Smith is an Australian singer who is part of the worship music group Hillsong United.

She is globally recognized for her work as a member of the Australian Christian worship band Hillsong United.

Her most significant hit as a band member was the song “Oceans (Where Feet May Fail),” which ultimately made it to the No. 1 spot on the American Billboard Christian Songs. It went on to win several other awards.

She is a passionate member of her local Church and dedicated to spreading her love for God through her music and Church.

When asked what the meaning of her unique name is and she stated, “my parents didn’t want to give us [Taya and her sisters], very common names. I love it because of the way they intentionally named each of us with names that have meaning.” She went on the state that she was named after the late daughter of close friends of her family.

Taya grew up in a small country town on the north side of Australia. She said about her childhood: ”I grew up in a Christian house. I accepted God in my life when I was five years old.”

She became a part of Hillsong Church’s City Campus in 2010.

Hillsong Church is a Christian megachurch originating from Sydney, Australia.

According to the church, more than 100,000 people attend services each week at the church or one of its affiliated church branches.

Kourtney Kardashian, Kylie Jenner, and Chris Pratt have been tied to the Hillsong Church.

During an interview, Smith said about Hillsong Church:

”Hillsong Church is led by our senior pastors Brian and Bobbie Houston.”

Taya went on to say:

”We’ve known right from the start, 30 years ago, that there’s a mandate on our house to bring forth music that would encourage the Church, and it’s for the greater Church.”

At first, Taya began as a youth worship leader with Hillsong Young & Free.

Currently, she is the lead female vocalist for Hillsong United. The band performs in concerts and church services.

Together they released their first album, “All of the Above,” as a group in 2007 with Taya on vocals. The album was in international success, and its popularity flourished. This album would propel Taya’s opportunity to begin touring more often and for larger crowds.

The album’s success paved the way for Taya’s career as a lead singer, and in 2013, she was on vocals for the hit song “Oceans (Where Feet May Fail)” off their independent studio album “Zion.”

Unbeknownst to Taya, the song would be one of her most significant accomplishments as part of the band as it peaked at No. 1 on the Billboard Hot Christian Songs chart on December 6, 2013.

To add to this success, Billboard labeled the song No. 1 Christian song of the 2010s decade and was certified quadruple platinum in the United States.

Due to this insurmountable success, Hillsong United would go on to be named the Artist of the Year.

In 2014 while Taya was still one of the main vocalists, Hillsong United was nominated and won five GMA Dove Awards.

In 2014 and 2015, her band was nominated for an American Music Award for Favorite Artist-Contemporary Inspirational.

In October 2016, the band won Worship Album of the Year for its fourth studio album, Empires, at the 47th Gospel Music Awards, and in 2018, they received four nominations at the 49th GMA Dove Awards, including Artist of the year.

The band won the award for the single, So Will I(100 BillionX).

In 2014, Smith was in a relationship with Aodhan King, a worship leader and songwriter for Young & Free who co-wrote songs called Sinking Deep, In Sync, Back to Life, Close, Alive, and Brighter.

In December 2017, she announced her engagement with Ben Gaukrodger.

“As our wedding day gets closer, things just keep falling sweetly into place & it feels like little kisses from heaven that are actually wild & beyond my best idea/thinking of how it would all go.”

”We got married yesterday and it was the GREATEST; I highly recommend it.”

”It was like that because of Jesus & the people He has placed in our life for such a time as this and we are blown away by all the love, support & kindness.”

“Marrying a couple is something I count as a high honor. When its people who you love and have become an older brother to, then it is beyond words!!!”

”Loved being a part of your special day @tayasmith and Ben love you guys sooo much!!!!”

“I always knew that my heart was in singing.”

“I didn’t grow up with any brothers, but I somehow inherited 14 brothers.”

“God uses worship music to reveal himself to people in ways we can only imagine.”

“God is completely in control, and He interweaves things if you completely surrender and trust Him.”

“Loads of people marry in their heart before they actually marry there partner – and sometimes it doesn’t work out.”

“Young people have a desire to be loved, to be seen and to be heard, regardless of where they are in the world.”

“There have been many times that really hard times have happened.”

“Worship is a weapon. And it’s a weapon where if you give people the right words to confess, it’s almost like a sword.”

In 2017, she caused a social media stir after she shaved her hair off. Smith confessed:

“I put it to our bass player and she checked the shape of my head and she said ‘yep’, and then I asked the guys, ‘What do you reckon?’ – because they’re the style gurus.”

During another interview, the Australian singer said:

”Well hair grows back, people have opinions, but life’s too short to even care about that.”

Her Instagram was flooded with comments both in favor or in opposition of the hairdo.

One commenter quoted from 1 Corinthians 11 verses 5 and 6. The scripture states:

“Every woman who prays or prophesies with her head uncovered dishonors her head-it is the same as having her head shaved.”

In 2014, the film “Let Hope Rise” was released. It details the rise of the group Hillsong UNITED.

She said about the film:

“If I’m being honest, I don’t think we knew what to expect because we’re not movie stars.”

“I guess we never thought that would be something that would be on the books for 2016 or even two years ago when we were filming it.”

The New York Times wrote that “Let Hope Rise” is “a slick, stirring concert film that details the sound and mission of the most impactful group in evangelicalism.”

Smith earns most of her wealth from being part of the Christian group Hillsong United.

READ THIS NEXT: Who is Jimmy Chamberlin?