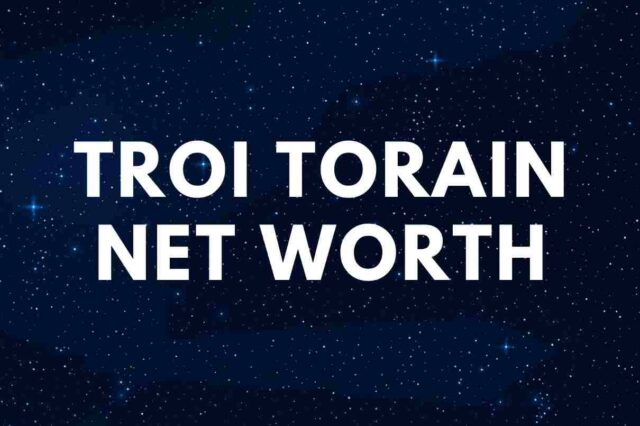 What is Troi Torain’s net worth?

To many, Troi Torain is known as the Howard Stern of urban culture.

He prefers to be compared to social critic and comedian Lenny Bruce.

He’s hit headlines for outspoken commentary and open threats on public radio, and started beef with celebrities from Eminem to Jay-Z to Jennifer Lopez.

Proving that there is no line he won’t cross for media attention, he’s also made threats to assault a child and made jokes about the death of R&B icon Aaliyah.

Torain is also a current shareholder in three supermarkets in New Jersey.

Here’s everything we know about the controversial shock jock courting the media.

He has a half-brother, Timothy Joseph, who was born when Torain was 15.

In March of 2000, Troi was hired to host the morning show on the radio station Hot 97.

Going by the name Star—which he later explained stands for Strange Thoughts and Revelations—he brought his brother on board.

Despite the controversy, Torain found work in radio again, eventually moving to Power 105 at WWPR-FM.

In 2006, Troi found himself in hot water again—this time for threatening a 4-year-old girl.

In a live-to-air broadcast on WWPR-FM on 3 May, Torain—who had been in an ongoing war of words with The Breakfast Show’s DJ Envy—took things a step further.

In comments directed at the ultra-successful Envy’s family Torain said:

The comment, which Torain followed up with an offer to pay listeners $500 to tell him where the child attended school, caused a massive influx of complaints to Clear Channel, who owned Torain’s contract.

10 days later, a warrant was issued for the arrest of the radio personality.

He surrendered himself to police in Manhattan and was divested of a handgun and pistol license.

He was interrogated by the Hate Crimes Unit for endangering the welfare of a child, due to the comments he had made and the way he used his perceived influence to encourage listeners to stalk the 4-year-old.

The charges of child endangerment were dropped, and Torain—who had violated several conditions of his employment contract with Power 105—was fired.

Not one to learn from his mistakes, Torain took on Hip Hop legend Jay-Z in 2014. On his own radio show—Star: Live and Direct—he called the mogul out for lying about his age.

He explained that he and Jay-Z were the same age, which made the rapper 7 or 8 years older than he claimed.

The rapper’s wife Beyonce had already come under fire for lying about her age.

The well-known—and well-documented—age scandal surrounding the songstress came with receipts however, Bianna Golodryga of Good Morning America went to high school with the singer, and stated that she was at least 3 years older than she claimed to be.

Torain had no such evidence to support his claims about Jay-Z.

The station, and in particular The Breakfast Club, featured rapper Game, who claimed of Torain: “I’m still gonna break his jaw when I see him.”

Torain, as it turned out, could dish the dirt out—but he couldn’t take it.

Instead of laughing the comments off, as he expected DJ Envy to do when he threatened the DJ’s daughter, he filed a multi-million dollar defamation suit.

Torain earned most of his wealth from working as a radio DJ. He’s also a shareholder in several supermarkets and was the owner of a trailer park community in Hazleton Pennsylvania.

Therefore, Broadcast radio personality Troi Torain has an estimated net worth of $5 million.

Ready to hear what Troi Torain has to say about politics, Black women, and Hip Hop culture? Check out The Star Report.

READ THIS NEXT: Who is Dr. Pol?