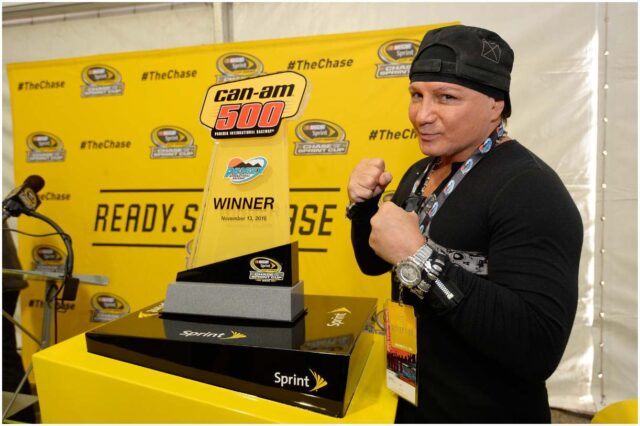 Vinny Pazienza (currently named – Vinny Paz) is an American former professional boxer who was the WBA Light Middleweight Champion as well as the IBF Lightweight Champion.

The film ”Bleed for This” is based on his comeback from a serious car accident.

”I started boxing when I was five years old, because I loved Muhammad Ali.”

”That made my life crazy!”

Vinny got his first world title in June 1987 in a fight vs. Greg Haugen. He won the match in 15 rounds and became the IBF world lightweight champion.

In 1991, he moved into the junior middleweight division.

On November 12, 1991, Pazienza got injured after his car was struck broadside in Warwick.

He suffered two fractured vertebrae in his neck and a dislocated vertebra.

Vinny wore a medical device called a Halo (a piece of equipment that encircles and is fixed to the head of a patient) for about 6 months. He declared in an interview:

”In a car, speed kills. Without a doubt.”

Pazienza went on to say:

”If we were going 25 miles per hour, that wouldn’t never have happened.”

His doctor removed the medical device from his skull with pain medications. He said:

”It was really the worst feeling in my life. It was horrid.”

”If it was today, I would have had him shoot me up with morphine.”

In his next match, Vinny defeated Brett Lally by a 6th-round TKO.

On June 26, 1993, Pazienza defeated Jamaican fighter Lloyd Honeyghan via technical knockout. In the same year, he won the IBO middleweight world title with an 11th-round KO over Dan Sherry.

In 1997, Pazienza received $926,000 for the broken neck he sustained in the car accident. In addition, Vinny received $1.5 million from penalties, reported AP News.

READ MORE: What is the net worth of Bailey Sarian?

Vinny was the inspiration for the American biographical sports film ”Bleed for This.” Paz was portrayed by Miles Teller. Other stars in the film are – Ted Levine, Ciarán Hinds, Katey Sagal, and Aaron Eckhart.

”Bleed for This” premiered on September 2, 2016, at the 43rd Annual Telluride Film Festival.

Paz was not married but had a relationship with Leigh Anderson, the 25th Anniversary Penthouse Pet in the September 1994 issue of Penthouse magazine.

In 2018, he pleaded no contest to assaulting his girlfriend. Pazienza said for ESPN:

Paz was ordered to undergo evaluations for substance abuse and mental health as well as to stay away from the victim.

He also received a year of probation and another year of a suspended sentence.

”If I’d listened to people, I never would have won the world title in the first place.”

”I grew up with Mexican people. I grew up with Spanish people. There weren’t many white fighters, and I never had problems with anybody.”

”I had a void, God. Filled with whores & with blunts. I ain’t have choice God I was born in the slums.”

Paz changed his name from Vinny Pazienza to Vinny Paz in the early 2000s.

Vinny lost $200,000 in one casino night. He confessed in a later interview:

”I have won maybe a couple of million dollars gambling but I blew $4 or $5 million.”

In January 2018, he was accused of attacking and hospitalizing a man. Apparently, the man stole around $16,000 from Vinny. He said:

”The bottom line is, I got robbed. And when that happens, you gotta do what you gotta do.”

Other famous boxers are Abner Mares and Marco Antonio Barrera.

Moreover, Vinny performed on an episode of The Jerry Springer Show. He also appeared as a guest star on the TV series Police Academy. In addition, he received royalties from ”Bleed for This.”

In May 2018, his home was scheduled for auction due to unpaid taxes. In 1997, Vinny received money for injuries he had sustained in a car accident. Therefore, former professional boxer Vinny Pazienza has an estimated net worth of $1.7 million.

READ THIS NEXT: Is Tim Tebow Married?