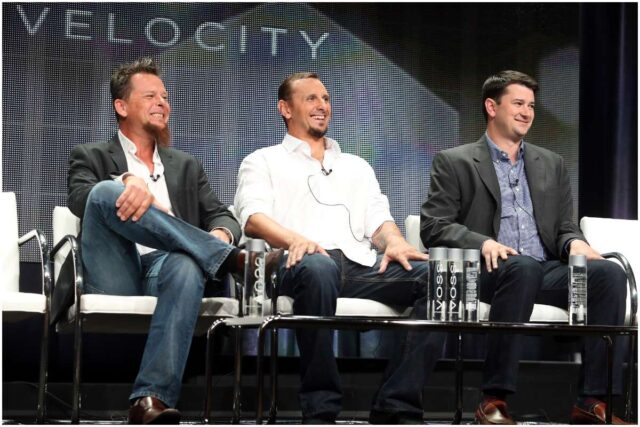 He gained fame from appearing on the TV series ”Bitchin’ Rides.”

Not much is known about his childhood except that he said in an interview: ”Growing up very poor, it was easy for me to imagine having more than I had because I had nothing!” Also, Dave is ”100% self-taught.”

For about eight years, Kindig worked at High-Performance Coatings in Salt Lake City. ”I quit my job, cashed in my 401K, and started my business, Kindig It Designs – this was about 20 years ago,” Dave later said.

In 1999, Dave and his wife founded Kindig-It Design in the family’s garage in Salt Lake City, Utah. Two months later, they moved to a bigger building in the Southeast part of Salt Lake City.

Dave built his successful business on his own, trusting in his passion for Lego and Hot Wheels. ”I built many big cars with my Legos and used parts such as wheels and axles from other toys to make my creations,” Kindig said. ”I loved drawing, too, so I went from drawing bugs to drawing hot rods.”

In 2013, Dave was featured in the documentary ”My Classic Car.”

In 2014, Dave became the star of Bitchin’ Rides, a reality television series during which viewers can see how Kindig and his team design and assemble world-class cars from the wheels up.

”Each one is different as sometimes I can do them quick, and sometimes I go back and forth and change them,” Dave same about his projects. In 2018, Kindig said: ”Every build is different. Our average build takes from 9-12 months from start to finish.”

In 2015, Beyond Bitchin’ Rides was released. In the series, Kevin Schiele and Dave take a look at their most bitchin’ projects.

In 1992, Dave Kindig married his wife, Charity Kindig. She has been interested in cars since she was a little girl.

Charity serves as the vice president of Kindig-It Design. ”It is the most rewarding experience to build a business with your best friend, and the hardest thing I have ever done,” she said.

The two first met in a dance club.

”I think that partnership with my wife and I has been one of the best things that have ever happened to me,” Dave confessed.

The couple has two children, daughter Baylee and son Drew. Both work with him at Kindig-It Design.

Baylee got married in August 2018. ”I would like to congratulate my daughter Baylee and my new son-in-law Kaden on their recent nuptials,” Dave wrote on Facebook. He added: ”You guys are rockstars, and your mother and I could not be happier for you!”

Kindig earned most of his wealth from managing his company Kindig-It Design.

His builds start from about $250k, but a project is usually worth close to a million.

”Trying to build within a budget is probably the biggest challenge for us. My creativity goes well past,” Dave explained in 2016. The company also sells merch on its website.

Therefore, car designer Dave Kindig has an estimated net worth of $3 million.

READ THIS NEXT: Who is Sue Aikens?