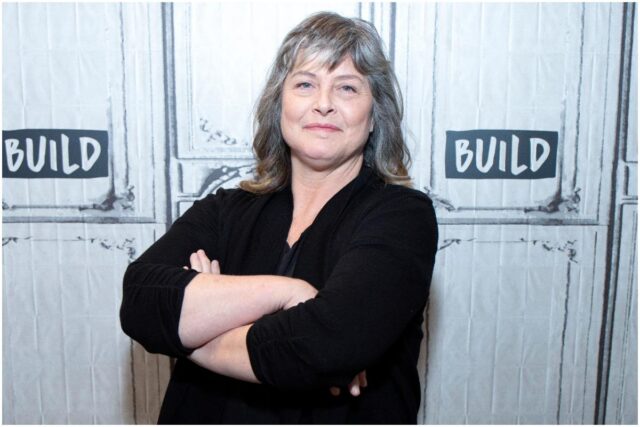 Sue Aikens is a hunter, adventurer, reality series star, and outdoorswoman who stars in the ”Life Below Zero” documentary.

Aikens is typically alone nine months of the year, surrounded by hungry wildlife and deadly cold.

In 1975, her mother left her father (at 2 a.m.) and took off to Alaska, taking Aikens along with her. ”In the late ’60s, early ’70s, she was leaving my father, and apparently whatever went on between the two of them, she felt Alaska was about as far as she could go,” Sue later explained.

The Kavik River Camp serves (beginning of June to the end of September) as a stop for adventurers, scientific researchers, birders, and hunters wanting to experience the Arctic. It has WiFi capability for its clients.

In 2007, Aikens was attacked by a bear and dragged across the ground while working close to the Kavik River.

”I was at the water and needed both hands for the pump, so put my gun down,” Sue told The Scotsman.” Then came the bear out of the fog, and it was game on,” Aikens added. ”He was a juvenile bear, climbing the social ladder, and one of the ways to do that is subjugate another creature.”

”At the time that he attacked me, I was getting my last pumping of water from the Kavik River before it froze solid … It was ten days lying there before someone found me.”

In 2013, Kavik River joined the cast of Life Below Zero, a documentary TV series that presents subsistence hunters’ usual activities as they survive using the resources they have.

In the docu-series, Aikens is filmed at her Kavik River Camp. ”They show me swearing, smoking stogies, and not brushing my hair for months on end,” Sue said for ADN.

Life Below Zero is produced by BBC Worldwide and airs on National Geographic.

Other main characters in Life Below Zero include:

In February 2017, Susan sued Life Below Zero producers, alleging she was injured while being forced to film dangerous scenes for the documentary series.

The incident happened in season five in an episode titled The Crash (aired June 18, 2015).

Her lawsuit was dismissed by a judge on June 16, 2017, ”for failure to make service” to the defendants.

In June 1987, Sue Aikens married Eddie James Aikens. They lived in Portland, Oregon. Sue and Eddie divorced in 2004. ”Marriage is a fine art, but it’s about compromise, and I’m not ready to compromise,” she once said.

”The first one died of brain cancer, and the second one, we were together for 17 years,” Susan confessed. She added: ”He tried it in Alaska, and that was too much for him, how I lived.”

”You have to stop and make time to give a moment to your sweetie. Long distances can be tough, but we both make it work”, Sue wrote on Instagram in July 2020. ”Love you, sweetie.”

Sue has a boy and a girl with Eddie James Aikens.

”I live my life with a pistol within reach.”

”Sometimes, loss comes at us like a slow thief that we have no power to stop.”

”Clarity is a very good thing when checking sparkly things out.”

”Fear is not happiness, so don’t let it control you.”

”It’s about accepting that there’s an ecosystem, and I have a place in it.”

”Be kind, be the solution, not the problem.”

”I do have a belief system, but every living thing deserves to be respected and cherished.”

She is a member of the Scottish Arctic Club.

In 2014, Aikens was a guest on The Joe Rogan Experience podcast.

Aikens earned most of her wealth from appearing in 134 episodes of Life Below Zero. According to reports, Susan’s annual salary is around $200k. She also appeared in Flying Wild Alaska and Sarah Palin’s Alaska.

In addition, Sue owns the Kavik River Camp. ”The Arctic and wilderness have been a passion and part of my soul for a long time,” she told Forbes. Therefore, outdoorswoman Sue Aikens has an estimated net worth of $0.5 million.

READ THIS NEXT: Who is Mike Holmes Jr.?