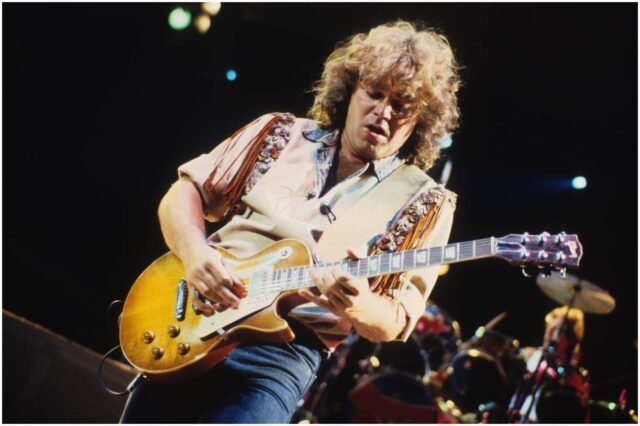 Richrath was born on October 18, 1949, in Peoria, Illinois, to Eunice and Curtis Richrath.

He had played saxophone in the school band.

At age 15, Richrath received his first acoustic guitar as a gift from his uncle Leroy (who played country-western music).

During an interview, he recalled:

”The first music things that I heard was, oh, Everly Brothers kind of thing and a lot of country guitar.”

Richrath went on to say:

”My uncle was a country guitarist, and he gave me a guitar and said, “Learn how to play this; it’ll keep you from starving,” and I said, “Great!”

Starting 1970, Richrath was part of the rock band ”REO Speedwagon” as a guitarist and songwriter.

Gary had a distinct guitar playing sound that dominated the REO Speedwagon’s music.

The band was famous for its power ballads – the best-known are I Can’t Fight This Feeling and Keep on Loving You.

REO Speedwagon had also released several successful albums, including “Hi Infidelity,” which sold more than 10 million copies in the US.

Over the course of its career, REO Speedwagon has charted 13 Top 40 hits and has sold over 40 million records.

Gary even sang on some of the band’s early hits, including:

In 1989, Richrath left the band due to his growing musical differences with other band members as well as alcohol abuse.

After he left REO Speedwagon, he started a new band called – ”Richrath.”

In 1992, the band released the album titled – ”Only the Strong Survive” on GNP Crescendo Records. The album featured Michael Jahnz on vocals.

They toured nationally for several years after ”Only the Strong Survive” was released.

The band had 11 Top Forty hits as well as two No. 1 singles – Can’t Fight This Feeling and Keep on Lovin’ You.

In 2013, Gary rejoined REO Speedwagon for a concert in aid of the residents of Bloomington, Illinois, who had been displaced by heavy storms. During the concert, the families affected by the storm sat near the stage. They raised over $300,000.

Gary has a son named Eric.

Richarth died on September 13, 2015, in Louisiana. He was 65 years old. Richrath was under a healthcare professional’s care when he died.

Kevin Cronin, a former bandmate in REO Speedwagon, wrote about the cause of Gary’s death:

“Gary was both a unique guitarist and songwriter, and the embodiment of the tough guy with a heart of gold.”

“He had some stomach problem or something, and he went in the hospital to get treated for a stomach ailment, and there were complications and he didn’t make it.”

“My bandmates and others have been telling their favorite stories about Gary and here is mine: The last time I saw him, he was happy.”

”When we reunited for a benefit concert in 2013, the bad feelings which had surrounded his departure from REO had finally evaporated. We joked around like no time had passed. We were friends again.”

“Gary was my musical soulmate and great friend for many years. We made over fifteen albums together and went through a lot both personally and musically.”

Gratzer went on to say:

”I’ll always miss him, but will cherish the memories of being in the studio, being onstage and just living life on the road. I feel like I lost a brother.”

During a later interview, Kevin Cronin said that REO Speedwagon will be:

“dedicating every show we do for the foreseeable future, probably forever, to Gary.”

In 2015, a petition was started to have Gary inducted in the Rock & Roll Hall of Fame.

Richrath earned most of his wealth from being part of the rock band REO Speedwagon. After he left REO, Gary made some money from his touring with a band that he started. Therefore, at the time of his death, Gary Richrath had an estimated net worth of $1.1 million.

READ THIS NEXT: Who is Jacob Collier?

13 thoughts on “Gary Richrath – Net Worth, Bio, Wife, Cause Of Death”