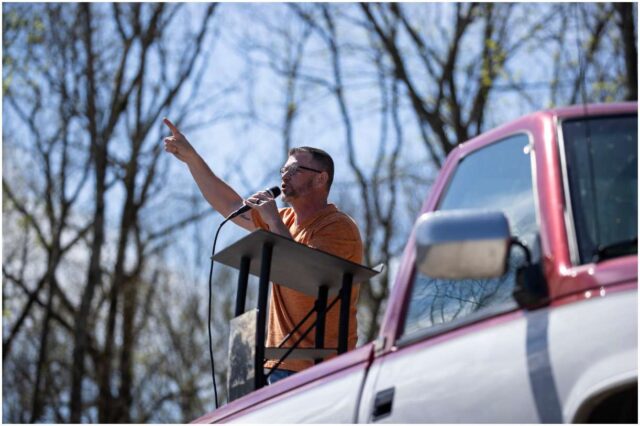 Locke has a large following online, including more than 2.2 million likes on his Facebook page.

He is often sought out for many church events.

Greg had preached in 48 states and 16 nations worldwide and preached his first sermon when he was 16.

Greg converted to Christianity in April of 1992.

”I grew up right in here in Mount Juliet, Tennessee. We only had like five or six thousand people in it, and it grew up through the years,” Greg told Eric Metaxas in November 2020.

He continued: ”I moved away, and I was actually in state’s custody. I was arrested six times. On probation five times. I was just a wayward teenager. My father was in the Tennessee State Penitentiary for about ten years, and I hated my stepdad … so, I was actually shipped off to a boy’s home, and I became a Christian ten days after I got there.”

Locke earned a Master’s Degree in Revival History from the Baptist Theological School of New England. In addition, Greg has a Graduate Of Theology degree from Ambassador Baptist College.

On November 5, 2006, he became the founding pastor of the Global Vision Bible Church.

On the Global Vision Bible Church website, they state:

”We believe in the eternal salvation of all believers. Once a person trusts in Christ, they are forever kept by the power of God and can never be lost.”

”Salvation is truly everlasting life. However, those who have trusted Christ are His and will obey Him and His Word. We do not believe a person can live any way they so desire and be saved.”

Greg and his Executive Pastor Jarrod Almond run the Global Vision Bible Church without the oversight of congregational votes, deacons, or a board of elders.

On October 5, 2020, he released a book that landed on the Amazon Best Seller list entitled “This Means War: We Will Not Surrender Through Silence.”

This book brings the high call of Christ to light where Faith, Family, and Politics intersect.

Pastor Greg Locke’s most recent publication, released on June 1, 2021, is titled “Weapons of Our Warfare.”

This book is about learning how to put on the armor of God and release its supernatural Holy Spirit power.

Pastor Locke leads the idea that he will find you fresh new ways to and help you defeat the enemy.

READ MORE: What is the net worth of Steve Ells?

Greg Locke got married to Melissa.

The couple got divorced in 2018. According to reports, his wife was the one who filed for divorce, citing “irreconcilable differences.”

“She’s been in and out of mental health facilities, but that is not where she is right now,” Locked said in an interview. ”She is at a place that helps ladies get on their feet again.”

Taisha is heavily involved in the church and has a large following online about their purpose and spreads God’s message.

“I’m legally remarried, and I’m legally divorced,” the pastor said. ”I’m not gonna live crazy and single for the rest of my life and just live in misery because my ex-wife decided to burn my life to the ground publicly with a bunch a lies about abuse and stuff which my kids were mortified by.”

Pastor Locke speaks about divorce in a Question-and-Answer interview in 2019.

The question was asking, “Does God Recognize a second marriage?”

To which he responded, “Yes, he does, and I am going to tell you why. Is divorce a jacked-up deal? Of course, it is. There is only one unpardonable sin in the bible, and that’s the rejection of the holy spirit. […]

I have met people whose second marriage is 10,000 times greater and more spiritual and more gospel impacting than their first one could have ever been. I’m not justifying divorce;

I’m not telling people they [should] get a divorce. I’m just saying it happens; it’s bad, and to say that that person has to live the rest of their life in secrecy and celibacy is to take the bible out of context and to use man’s rules to override what the bible teaches.”

Greg and Melissa have a daughter and three boys.

”How about we spend money taking care of our homeless veterans that we should’ve taken care of a long time ago.”

”There are very few people as gifted at lying as Hillary Clinton.”

“You can be assured of the fact that whoever gets the Republican nomination will get my vote as well as my support.”

”There are two kinds of people in the church – those being used by God and those who are using God.”

At age 15, after five arrests, he ended up at Good Shepherd Children’s Home in Murfreesboro.

In 2004, his religious conversion and life story were dramatized on “Unshackled!,” a radio drama series that is produced by Pacific Garden Mission.

Locke has been criticized for abandoning the Church of the King James version.

In 2019, Greg posted a video of himself on Facebook burning a book (The Founding Myth: Why Christian Nationalism Is Un-American) by Andrew Seidel, an atheist constitutional attorney. The latter argued the United Stated was not built as a Christian nation.

”I was just making my point that any history of America that would exclude God or the Bible or a pastor’s viewpoint is just really ridiculous,” Locke revealed.

Seidel added: ”But burning books doesn’t destroy the ideas contained in them.”

Locke earned most of his wealth from being the founder and lead pastor of Global Vision Bible Church. Pastor Greg Locke’s salary is undisclosed.

He receives his income from speaking at college campuses, seminars, and religious workshops.

Locke also makes money from his line of women’s and men’s apparel (pastorlocke.com/shop/).

He’s the author of Accessing Your Anointing and REVIVAL.

Pastor Greg Locke began a podcast in 2020. His podcast is a news and opinions podcast that deals with faith, family, and politics.

Therefore, pastor Greg Locke has an estimated net worth of $500,000.

READ THIS NEXT: David Platt Net Worth