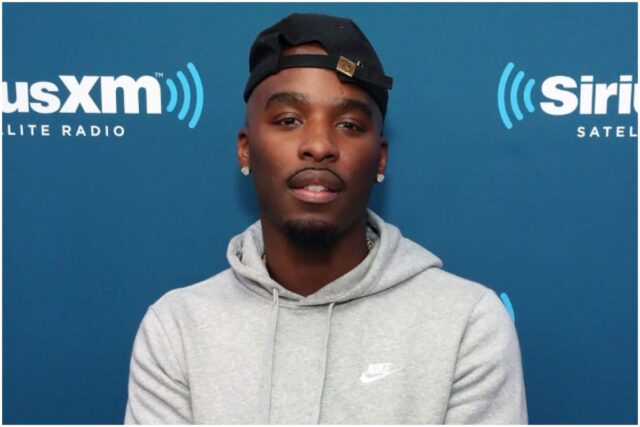 What is Hitman Holla’s net worth?

He is famous for his aggressive style of rap and hilarious yet brutal punch lines in his songs.

Fulton is best known for his performance in rap battle leagues such as Battle America and SMACK/URL.

His brother was involved in a battle rap that went viral.

His dad, Big Gerald, attends many of his battles.

”My mother was misdiagnosed in 2013, and in 2014 doctors confirmed that she had stage two breast cancer,” Fulton said in an interview. He added: ”Doctors removed the tumor from her breast a month later, and she started chemotherapy and completed radiation afterwards.”

He played varsity basketball while in high school and went on to get a scholarship from California State Northridge.

In 2008, Fulton started battle rapping. His first battle rap was vs. RemyD.

Holla quickly rose in the ranks and gained widespread fame when defeating rapper Bill Collector. Since then, Fulton has continued to grow in popularity.

In 2020, he was arrested by an Atlanta police patroller for allegedly switching lanes illegally. Holla was released after two days.

In December 2020, he started an online rap battle with Shaquille O’Neal.

Shaq rapped: ”First of all, when I spit, you know I ain’t no joke / Hitman Holla you don’t want this smoke.”

Holla responded: ”Ay yo Shaq, I don’t care about you being 7’1. What, you think you won’t get slapped a bit? / Baseball bat to the stomach. I’ma make Shaquille O’Neal like Kaepernick.”

The couple has a YouTube channel called – ”HitMan Holla & Cinnamon.”

”I love you soo much. It’s been one hell of a ride, but I wouldn’t trade this for nothing in the world,” Cinnamon wrote on her Instagram in November 2020. ”We’ve had the best times together and the worst times together, but we’ve gotten through the good, the bad & the ugly… thank you for always treating me like a princess and showing me new adventures.”

In October 2021, Cinnamon was shot in the face by burglars who broke into their home.

”I say this every time, me having him at 17 was the best thing that happened to me,” Holla said in January 2020. ”I have been focused EVER since!! I never left his side, and I never will.”

”I’m not feeding into negativity I’m having friendly debates.”

”See me and then get the shaking, you just a rattled snake.”

He has battle rapped vs. Conceited several times.

His mottos are Yett Yett and Ball Game.

Fulton is a talented battle rapper. It is believed that his main source of income is from earnings from battle rapping, tv appearances, and releasing original music.

He currently has an album on Amazon and other streaming platforms. Since then, he has also released songs such as “Diddy Dum Dum” which features rapper Jeff.

It is expected that he earns revenue from live events where he raps his songs and other seminars he performs at.

Fulton has also made it on the big screen. Most recently, in 2020, he had a small feature in the movie “She Ball,” where he played a small part as a character called “Rome.”

He has also been on TV as well. He was on a tv series released in 2021 called “Games People Play,” a show about three ambitious women who try to navigate the professional sports industry.

Gerald has also been in a few music videos. One popular music video for “All About the Benjamins” included Nick Cannon and Conceited.

His main source of income is the revenue he earns from battle rapping. It is estimated that Hitman makes about $30k from each competitive rap battle.

He is reported to live in a house with his girlfriend Cinnamon in Atlanta, Georgia.

Hitman Holla and his girlfriend also run a small YouTube channel. Here, they give weekly updates and upload random videos about their life, their relationship, and so much more. However, because their channel is so small, the expected revenue from their YouTube channel is minimal.

Fulton has several sources of income, including tv appearances, his clothing lines, music videos, streaming, and, most importantly, battle rapping.

Therefore, battle rapper Hitman Holla has an estimated net worth of $1 million.

READ THIS NEXT: Who is Joy Villa?