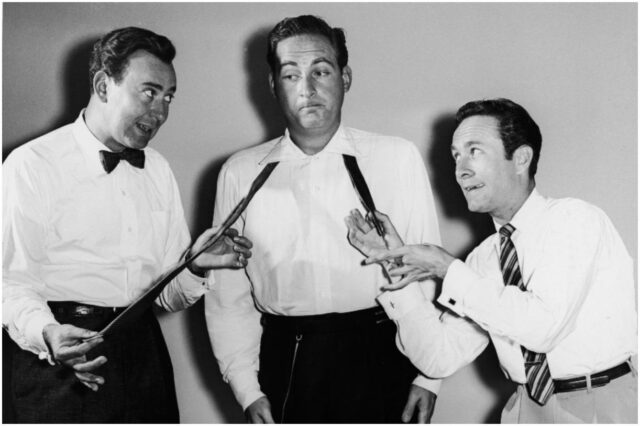 Morris is also renowned for his role as “Uncle Goopy” on Sid Caesar’s Your Show of Shows as well as Ernest T. Bass in The Andy Griffith Show.

In the US Army, Mr. Morris was assigned to the US Army Special Services unit (the entertainment branch of the American military) as a First Sergeant.

After World War II, Howard made his Broadway debut in the “GI Hamlet.”

In 1950, Allan Melvin and Howard performed in Beetle Bailey, an American comic strip series that was set on a fictional United States Army post. It was created by cartoonist Mort Walker.

In April 1954, he starred in “This Is Your Story,” an 11-minute takeoff on Ralph Edwards’ This Is Your Life.

In 1957, Howard appeared twice in two episodes of the comedy/variety show, The Polly Bergen Show.

Starting in 1962, he played several voices in the Hanna-Barbera series.

From 1962 to 1965, Mr. Morris performed in The Flintstones. In 2013, TV Guide ranked The Flintstones the 2nd-greatest TV cartoon of all time. The series takes place in a romanticized Stone Age setting.

In 1963, he portrayed Mr. Elmer Kelp in the movie The Nutty Professor.

In 1965, Howard directed the classic black-and-white pilot of TV’s Get Smart.

In the follow-up year, Morris played the role of Schmidlap in Way… Way Out, an American comedy film that was directed by Gordon Douglas.

In 1968, Howard directed the film – With Six You Get Eggroll. It was Doris Day’s final film performance. Also, it was the first film that was produced by the CBS Television Network’s film unit, Cinema Center Films.

From 1967 to 1992, he supplied the voice of the koala in TV commercials for Qantas, saying the tagline, “I hate Qantas.”

In the 1970s, Morris directed several McDonaldland (a fantasy world that was used in the marketing for McDonald’s restaurants) commercials featuring Mayor McCheese, the Hamburglar, and Ronald.

In 1989, Morris performed on ”Murder, She Wrote,” a crime drama TV series that aired from 1984 to 1996 on the CBS network. Angela Lansbury was the main character of the series.

In 1994, he voiced Mr. Fox, the Sneetches, Garfield the Third Fish, and Zinn-a-Zu the Bird in Storybook Weaver.

Howard Morris married Mary Helen McGowan in 1945. They divorced in 1958.

Howard had four children – three daughters and a son.

In 2010, David Morris, his son, released his debut modern rock album, named – ”Picture An Accident.” It was dedicated to his father.

During an interview, David Morris said about the album:

“A mix of traditional and non-traditional instrumentation was used to create musical tension, while also providing an emotional lift.”

“I lost my father in 2005, and I really miss him. His life was outstanding, and that inspired me to make this record.”

READ MORE: Who is Malina Weissman?

No cause of death was announced; however, the artist had heart problems in his last years.

Interesting fact –  his father died of heart failure when his business went to the wall during the Great Depression.

Howard is survived by his four children and three grandchildren.

“All I can really say now is that I miss him beyond words.”

His body was buried at the Hillside Memorial Park Cemetery, California.

Quotes (from his movies)

”Say, you ought to do something about that speech impediment, sonny.”

”Look at me. I’m an accountant with a secret life.”

”That supercilious scoundrel confiscated my honey.”

Morris earned most of his wealth from his 60-year career in show business. He worked as a voice-over artist, director, and actor.

Howard is best known for his characters – Ernest T. Bass in the sitcom ‘The Andy Griffith Show’ and Uncle Goopy in the variety show ‘Your Show of Shows.’

Morris also worked as a voiceover actor. Some of his roles include Wade Duck on Garfield and Friends, Mr. Peebles on the Magilla Gorilla show, Jughead on the Archie shows, and Atom Ant.

Therefore, at the time of his death, actor Howard Morris had an estimated net worth of $1 million.

READ THIS NEXT: Victor French Biography