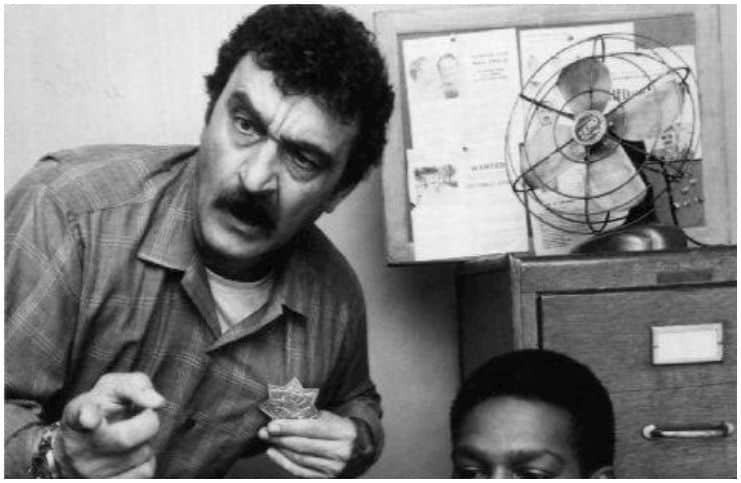 Victor French (birth name – Victor Edwin French), nicknamed – Uncle Eddie, was an American television actor who is best known for playing Mark Gordon in ”Highway to Heaven” and Isaiah Edwards in ”Little House on the Prairie.”

He was born on December 4, 1934, in Santa Barbara, California, USA, to an Armenian mother and an American father, Ted French. His father was a Hollywood actor and stuntman.

His grandfather was also an actor.

According to Legacy, French said about his parents:

“I had parents with terrific values too. The thing they taught us was respect for other people and their property.”

He began his TV career as a stuntman, mostly in westerns.

His debut as an actor was a small role in Lassie (uncredited). He had another uncredited role as an office clerk in the film The Magnificent Seven, a 1960 Western film that was directed by John Sturges.

His real role was on the syndicated series Two Faces West in the 1961 episode “The Noose.” Two Faces West was a 39-episode half-hour TV western series set in southwestern Colorado.

After, he was cast on the ABC/Warner Brothers western series The Dakotas as Larrimore in the episode “Fargo.” The short-lived program is considered a spin-off of Clint Walker’s Cheyenne. Some of the stars are – Michael Greene, Chad Everett, Jack Elam, and Larry Ward.

From 1965 to 1966, French played the recurring character “Agent 44” as an undercover spy in the NBC series Get Smart. The TV series was popular in the US in the late 1960s and parodies the secret agent genre.

In 1969, he starred in the western, ”Charro!” a western film shot on location at Apacheland Movie Ranch and starring Elvis Presley.

Gunsmoke is a TV Western drama series that ran from September 10, 1955, to March 31, 1975, on CBS. Some of the stars appearing in Gunsmoke are – Burt Reynolds, Ken Curtis, Milburn Stone, Amanda Blake, Dennis Weaver, and James Arness.

From 1966-1975, French appeared on 18 episodes of Gunsmoke. Additionally, he directed 5 episodes of the Western drama.

In 1972, Victor appeared in a guest-actor role on The Waltons, an American TV series created by Earl Hamner Jr., based on the book – ”Spencer’s Mountain.”

In 1973, he performed as a corrupt, bigoted sheriff who made a guest appearance on Kung Fu, an American action-adventure martial arts western drama TV series that follows the adventures of a Shaolin monk, Kwai Chang Caine.

Little House on the Prairie

The series explored many different themes including often portrayed ones of racism, blindness, poverty, faith, alcoholism, and adoption.

French was inducted (as a cast member of Little House) into the Hall of Great Western Performers of the National Cowboy.

In ”Little House on the Prairie,” Victor stared alongside his friend Michael Landon, an American producer, director, writer, and actor.

During an interview, French said about Landon:

″The network wanted a name actor, but Michael stood by his guns. That role changed my career.″

″Michael is really my ’angel.’″

In 1977, French left ”Little House on the Prairie” to star in sitcom Carter Country as a small-town Georgia police chief.

A few years after sitcom ″Carter Country″ was canceled, Victor rejoined ”Little House on the Prairie.” He remained with the television series until 1983.

In 1982, he performed as the stepfather of protagonist Paula Pokrifkiin the film ”An Officer and a Gentleman.” The film is a romantic drama film starring Louis Gossett Jr., Debra Winger, and Richard Gere.

In 1998, French was inducted into the Western Performers Hall of Fame at the National Cowboy.

On March 14, 1976, he married Julie Cobb, an American actress. Her film career has included roles in:

French has three children with his first wife:

Victor was a chain smoker (a person who smokes cigarettes one after another).

The actor had been ill with lung cancer for about 3 months before his death.

At his request, there were no services.

He had an impressive collection of western memorabilia, including Roy Rogers’ boots and Buck Jones’ hat.

Victor later appeared with his father in a war film called The Quick and The Dead in 1963 as well as in one episode of Gunsmoke entitled “Prime Of Life” in 1966.

French earned most of his wealth from performing in numerous TV series and films. He was known early in his career as a leading television villain in ″Gunsmoke.″

Some of his TV shows are – The Virginian, Ben Casey, Dr. Kildare, Rawhide, Wild West, The Wild, Hazel, Hogan’s Heroes, Little House on the Prairie, Hawaiian Eye, No Time for Sergeants, and 77 Sunset Strip.

Victor also performed in the following films – The Nickel Ride, The Quick and the Dead, The House on Skull Mountain, The Other, Rio Lobo, Death of a Gunfighter, and Spencer’s Mountain. Therefore, at the time of his death, Victor French had an estimated net worth of $3.7 million.

1 thought on “Victor French – Net Worth, Bio, Children, Height, Cause Of Death”