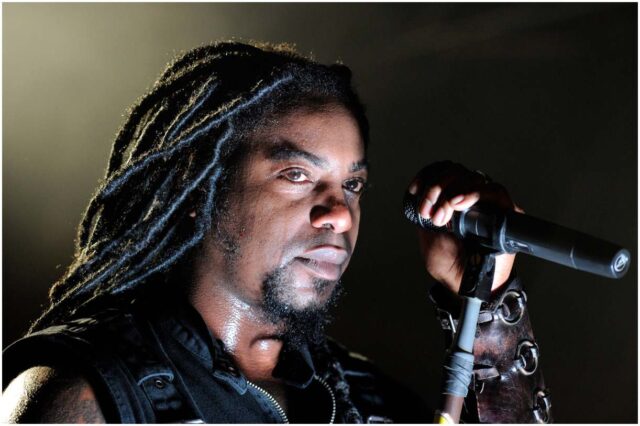 Lajon Witherspoon is an American musician who is best known as the vocalist for the alternative metal band Sevendust.

Witherspoon was born on October 3, 1972, in Nashville, Tennessee, USA.

His father was a singer in a funk band when his family lived in Nashville.

”I grew up listening to R&B, gospel, and rock,” Lajon told Louder Sound. He added: ”I started listening to country when I got older, then it turned when I was about 13 when I heard Black Sabbath, Thin Lizzy, and Jimi Hendrix.”

During high school, Lajon was a wrestler and football player.

He is the vocalist of SEVENDUST, an alternative metal band that is also comprised of:

On November 13, 2001, American alternative metal band Sevendust released their third album, entitled – ”Animosity” through TVT Records. It was certified gold on March 11, 2002. Animosity remained on the Billboard 200 for 13 weeks.

On October 7, 2003, Sevendust released another album, called – ”Seasons.” The album was dedicated to the memory of Dave Williams and Witherspoon’s younger brother.

In March 2008, Lajon was named as one of the “Top 100 Metal Vocalists of All Time” by American music magazine Hit Parader.

When asked by Uberrock about the differences between the US and the UK, Witherspoon said:

”It’s different worlds. Everybody is even more passionate out here because we haven’t been over in so long.”

The couple has two daughters (Jada Legend and Maya Diane) and a son (Kingston Lajon Witherspoon).

In a 2010 interview by Noise Creep, Witherspoon talked about being a parent:

”Being a parent is hard, period, being the time we’re in now. I have a 10-year-old and a 19-month-old daughter. I love being a daddy.”

”It’s hard being away from home and missing out on seeing things you probably should be seeing. We make up for it when we get home.”

On Sunday, November 9, 2002, Witherspoon’s brother Reginald was murdered. Lajon learned of Reginald’s murder from his father just minutes before a performance of his rock band.

”Every last one of the songs have a special meaning.”

”I’d probably work with horses with the family, but I’d still play music in some kind of way, even if it was in a damn karaoke bar somewhere.”

”I think life is like a chess game. You just have to make the right move, and it might take a little while.”

”We’re a rock and roll band! We keep it real and it’s not all about being the heaviest vocals in the world.”

”Doing some music, and I look forward to getting it out there for everyone to hear it.”

Lajon drives a Honda Pilot. He said for Motortrend:

”I love the sunroof, I love the TV that flips down for the young ones in the back, it’s got plenty of room, it’s got the third-row seat.”

”Right now, living here in Kansas, we’re new to the area and the wife thought it would be a good idea and it’s saved our lives, being in snow blizzards.”

Witherspoon earned most of his wealth from being the lead singer for the Atlanta-based hard rock group Sevendust. They make money from selling tickets to their concerts as well as their 12 studio albums. Therefore, Lajon Witherspoon has an estimated net worth of $5 million.