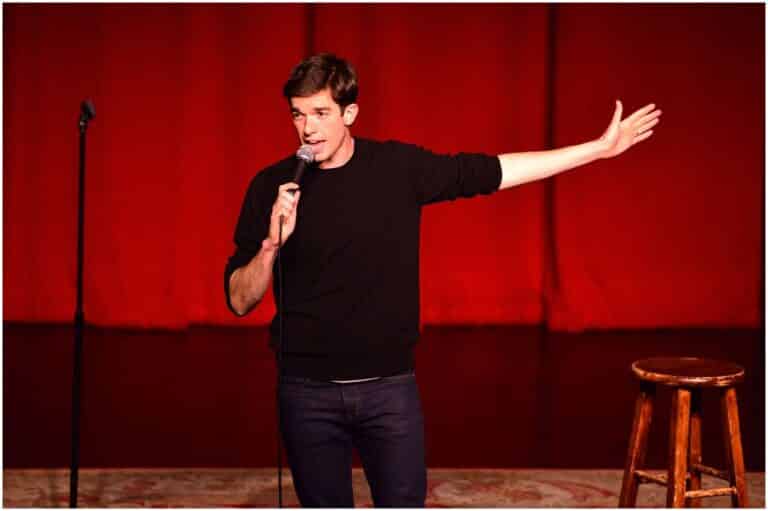 ”John Mulaney, this is the future of comedy, ladies and gentlemen.”

His maternal great-grandfather was George J. Bates, a former member of the US House of Representatives from the state of Massachusetts.

His father, Charles (Chip) W. Mulaney, Jr., is an attorney, while his mother, Ellen, is a law professor. Both his parents are of Irish Catholic descent. They attended Georgetown University and Yale Law School with Bill Clinton.

John was an altar boy when he was young.

Mulaney said for Chicago Reader about his childhood:

”I grew up on the north side in Lincoln Park and I love Chicago. I loved growing up there.”

He went to St. Clement School.

In August 2008, he auditioned for Saturday Night Live.

In 2010, John did several voice roles in Ugly Americans, an animated sitcom created by Devin Clark.

In 2011, he won an Emmy award for co-writing Justin Timberlake’s monologue.

In the follow-up year, his stand-up comedy special ”New In Town” premiered on Comedy Central.

From 2009 to 2012, he was nominated for the Primetime Emmy Award for Outstanding Writing for a Variety Series with the Saturday Night Live writing staff.

In 2014, his television series Mulaney debuted on FOX. At the beginning of each episode, he performed stand-up comedy with the studio audience. The January 18, 2015 episode became the highest-rated, with more than 3 million viewers. The show was canceled in March 2015.

In 2017, John became a consulting producer on the Netflix show Big Mouth. The show was created by Jennifer Flackett, Mark Levin, Andrew Goldberg, and Nick Kroll.

In 2018, he voiced Spider-Ham in ”Spider-Man: Into the Spider-Verse” – the first animated feature film in the Spider-Man franchise. The film grossed more than $375 million worldwide.

On July 5, 2014, John Mulaney married Annamarie Tendler at the Catskill Mountains in NY. Dan Levy officiated the ceremony. The couple first met on a group vacation at Martha’s Vineyard in Massachusetts.

”I wish I could live it over and over again.”

Note – Annamarie Tendler is a makeup artist who worked with Glamour and MTV Styles. She also has a blog, named – ”The Daily Face.”

”John is the man I am going to marry.”

After they got engaged, John said to the Guardian:

Mulaney went on to say:

”I was just immediately: ‘I can hang out with this person every day.’”

”I remember as a kid every car was tan or banana-colored.”

”One of my theories is that kids think that they’re older than they’ve ever been. They believe they’re adults.”

”I had parents that were strict sometimes, had high standards, but were incredibly loving, and I got very lucky.”

”I am never, in my mind, making fun of anything.”

In 2013, Mulaney and his wife adopted a French Bulldog named – ”Petunia.”

”I would also love to get an apology from Ben Affleck who grabbed my ass at a Golden Globes party in 2014.”

In 2016, John donated to the Bernie Sanders presidential campaign.

Mulaney earned most of his wealth from stand-up comedy and performing in several TV shows.

Some of the TV series and movies in which John performed are – Dickinson, Big Mouth, The Simpsons, Crashing, Conan, Oh, Hello on Broadway, The Jim Gaffigan Show, and Kroll Show.

READ THIS NEXT: Facts about Delta Burke