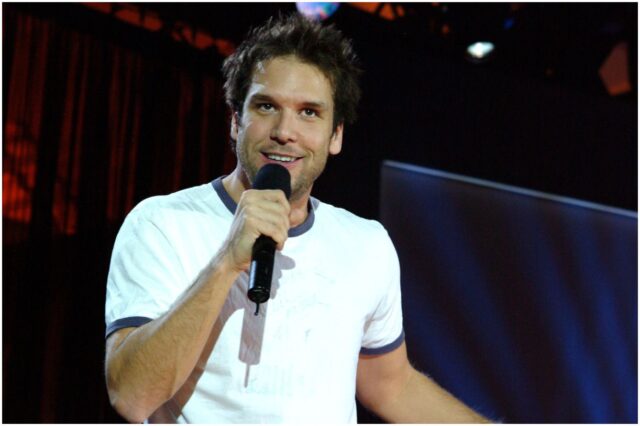 Dane Cook (birth name – Dane Jeffrey Cook) is an American actor and stand-up comedian who has starred in the films My Best Friend’s Girl, Dan in Real Life, and Good Luck Chuck.

His paternal grandparents were both born on Prince Edward Island.

He has German, Scottish, English, and Irish ancestry.

Dane credits his parents for his humorous side. Unfortunately,  his father, George, died of pancreatic cancer (at age 74), while his mother, Donna, died of colon cancer (at age 66).

He graduated from Arlington High School.

In 1998, he got his big break when he performed on Comedy Central’s Premium Blend.

In 2006, Dane performed in the movie, ”Employee of the Month.” Other stars in the movies were Dax Shepard and Jessica Simpson.

In June 2007, he performed as photographer ”Mr. Smith” in the movie ”Mr. Brooks.” Other stars in the movie are William Hurt, Demi Moore, and Kevin Costner. The film grossed more than $48 million.

On January 1, 2008, he broke American stand-up comedian Dave Chappelle’s record, by performing on stage for 7 hours.

Later that year, he had a role as Tank Turner in My Best Friend’s Girl with Lizzy Caplan, Alec Baldwin, Diora Baird, Jason Biggs, and Kate Hudson. It grossed more than $41.5 million worldwide.

In 2008, Al Del Bene, Robert Kelly, and Cook went to Iraq to entertain the American troops stationed there.

On May 17, 2009, his stand-up comedy special, ”ISolated INcident,” premiered on Comedy Central.

In 2013, he voiced the character of Dusty Crophopper in the film, ”Planes.”

In May 2018, Cook performed at Hard Rock Rocksino.

In December 2020, Dane bought a house directly across the street from his Hollywood Hills residence for $3 million.

In 2017, Dane Cook began a relationship with Kelsi Taylor, an American pop singer who performed live at the Republic of Pie in North Hollywood in 2018. She released her debut EP in 2018.

Cook said about their first meeting:

”We met at a game night I host at my place.”

Dane went on to say:

”We were friends for a while and soon after fell in like with each and then upgraded to love.”

In 2019, he was invited to The Tonight Show Starring Jimmy Fallon. He said on the show:

”Once in a while, I’ll say to myself: Where have you been all of my life?”

”And then I realize she [Kelsi Taylor] wasn’t alive for the first 28 years of it.”

During an episode of Jimmy Kimmel Live, Boston reported that the comedian confessed:

”It’s a little tricky though because my girlfriend and I get a lot of crap from people because we have an age difference.”

According to Fox News, an insider said about their relationship:

”Dane is so in love with Kelsi. He treats her [Kelsi Taylor] as though she’s his wife even though he’s said he’ll never get married.”

”I’ve always been considered more of a storyteller and observational comedian and that’s been my sweet spot for a long time.”

”I want people to feel like they’re seeing somebody talk about where they’re at now.”

”My mom knew that I was gonna a performer and she immediately encouraged it.”

”My real first job was delivering newspapers with I was 15.”

According to Dr. Adam Hamawy, he used Botox ”to help elevate the eyebrows and keep his forehead smooth from wrinkles.”

Comedian Ron White has criticized Cook for his inflated ego as well as for his lack of real material. White said: “[Cook] does not make me laugh, at all, in any way, shape, or form.”

Other famous comedians are Daliso Chaponda and Bruce Greene.

Cook earned most of his wealth from selling his DVDs and performing in over 49 movies and TV series, including – American Gods, 400 Days, and more.

In October 2010, Darryl McCauley, his half-brother, was found guilty of stealing millions of dollars from Dane. Darryl was Dane’s business manager from 1990 to 1998. His brother was sentenced to 6 years in prison.

Cook said in an interview – ”My mom and dad passed away from cancer. Within nine months, I lost both of my folks.” Dane continued – ”Immediately after that, I had a horrible betrayal where my brother, who worked for me, stole a lot of my money.”

In December 2020, Cook bought a house in Hollywood Hills, Los Angeles, for $3 million. He already owned a house across the street which he purchased in 2008 for $7 million.

Therefore, American stand-up comedian Dane Cook has an estimated net worth of $40 million.

READ THIS NEXT: Who is Tiffany Haddish?