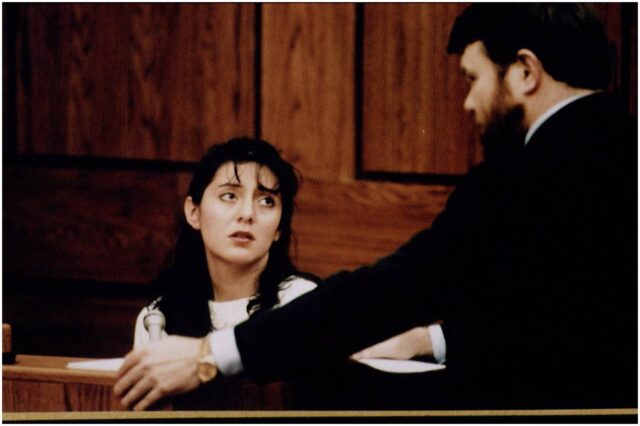 What is Lorena Bobbitt’s net worth?

Lorena Bobbitt became known in June 1993 as the woman who cut off her sleeping husband’s penis with a carving knife.

On June 18, 1989, Lorena married John Wayne Bobbitt. The couple first met at a Marine Corps ball. Lorena said in a later interview that she thought Bobbitt was ”an absolute gentleman” when they first met.

At the time, she was in the US on a student visa.

Her mother had no objections to Lorena marrying John. Lorena confessed about what her mother thought of John – ”he had no long hair, tattoos, earrings.” She added: ”he was in the military.”

On the night of June 23, 1993, Lorena severed her sleeping husband’s penis with a kitchen knife.

”I remember driving with his severed penis in my hand, and in my other hand, I had the knife.”

Lorena went on to say:

”I didn’t even know how I got into the car, and apparently I had to toss it somewhere because I couldn’t turn the wheel of my car, so I got rid of the thing.”

Realizing the severity of the incident, Lorena stopped and called 911. John said:

”I was bleeding to death. It was one of the most terrifying things I ever went through.”

After a long search, the police officer located the penis and brought it to the hospital where Bobbitt was being treated.

The penis was subsequently surgically re-attached.

After the incident, she spent 45 days in a mental hospital.

Both were charged – malicious wounding for her and marital sexual assault for him, both with maximum penalties of two decades in prison.

Lorena would later testify that she endured systematic emotional, verbal, and physical abuse throughout their marriage.

She also said that she and Bobbitt were just one month into their marriage when John hit her for the first time.

She was found not guilty of malicious wounding because of temporary insanity. Her lawyer stated:

”In her mind, it was his penis from which she could not escape which caused her the most pain.”

”The most fear. The most humiliation.”

”I couldn’t believe it, how could someone get away with it.”

In the mid-1990, John made a series of adult films to show off that his penis is still functional. He declared in an interview:

”My movies were the bestselling adult videos in history.”

“I won awards for it, and I traveled around to different countries and went to award shows and stuff.”

In 1994, Bobbitt was charged with striking Kristina Elliott, a former exotic dancer he met while in Las Vegas.

In 1995, Lorena and Bobbitt divorced.

In October 1996, Lorena visited her native Ecuador, where she met with Abdalá Bucaram (the President of Ecuador from August 10, 1996, to February 6, 1997) for the official dinner.

In December 1997, she was charged with assaulting her mother. However, Lorena was found not guilty. The two later reconciled.

In September 1999, Bobbitt was ordered to serve 100 hours of community service and to pay $5,000 restitution as well as he was sentenced to 5 years probation for his role in a clothing theft from a store in Fallon.

In 2007, Lorena launched an organization (Lorena’s Red Wagon) that is dedicated to the prevention of domestic violence. During an interview, Lorena said:

”It’s wonderful to know that I help other women working in a shelter.”

In another interview, Lorena declared:

”There’s so much more that we can still do to protect women.”

In May 2009, Bobbitt and his ex-wife appeared together on the show The Insider.

In February 2019, a documentary titled “Lorena” was released by Amazon Prime Video. It was directed by Joshua Rofé.

The trailer of the documentary starts as follows:

During the documentary, Lorena revealed that Bobbitt reached out to her several times over the years. She said:

In April 2022, the documentary, Lorena: Escaping Bobbitt, was released.

She has a daughter named Olivia with her new partner, Dave Bellinger. She hasn’t remarried.

At the Sundance Film Festival, Lorena watched the documentary with her daughter. Olivia said for Today: ”Mom, I didn’t realize how strong you are.” Olivia also said – “My heart just, you know, melt.”

”I want people to understand that they’re not alone.”

The terms Bobbitt Procedure and Bobbittized punishment gained social recognition after the 1993 incident.

In 1993, Bobbitt was working as a manicurist and hairstylist in Manassas. In the present day, she goes by her maiden name, Gallo. Lorena currently works as a hairstylist in Ashburn, Virginia.

Her net worth increased significantly with the release of the documentaries ”Lorena” and “Lorena: Escaping Bobbitt.”

Where is Lorena Bobbitt now?

She works as a manicurist and hairstylist. Additionally, Gallo has a real estate license.

READ THIS NEXT: What is Ben Mallah’s net worth?