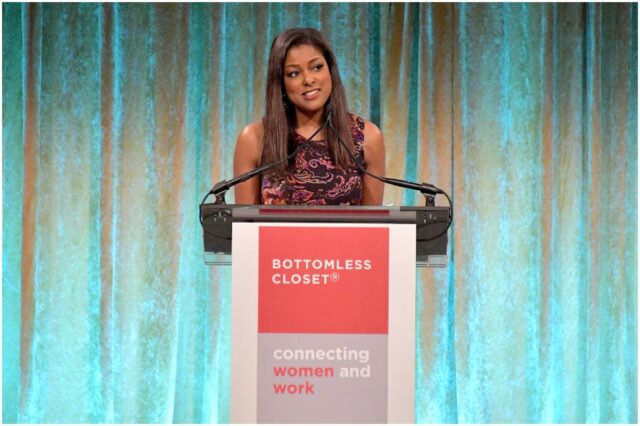 Lori Stokes is an American nine-time Emmy award-winning journalist (her Emmy awards include one for her in-depth investigative reporting on violence against children), who was the first African-American to broadcast on MSNCB.

Stokes is currently working as a co-host of Good Day New York on Fox 5 NY WNYW, with Rosanna Scotto.

Lori began her career as a medical reporter in 1986 at WCIA in Champaign-Urbana, Illinois.

After, she went to MSNBC as one of the original anchors on the 24-hour cable news television channel. She also worked at NBC News as a rotating newsreader for Weekend Today and NBC Sunrise.

She was paired with television journalist Robb Hanrahan on WABC-TV’s Eyewitness News This Morning.

In June 2015, Rosato and Lori were relieved of their noon duties in order to focus on the morning news.

In August 2017, she left ”Eyewitness News This Morning.”

”Good Day New York” is a morning show airing on WNYW Fox 5, that broadcasts each weekday morning from 4:30 to 10 a.m. Eastern Time.

During an interview, Lori said about her new job:

“It’s going great. Any time you make a huge jump after being somewhere for 17 years, it’s a little frightening, especially when you have your sense of security, plus being the age I am.”

Louis was elected to the House in 1968, becoming Ohio’s 1st black member of Congress. Stokes served 15 terms in the US House of Representatives.

Lori said about her father’s time in the US Army:

“He, along with his other black soldiers, were prepared to fight for this country, but instead they were relegated to cleaning barracks of white soldiers.”

Louis finished his autobiography, “The Gentleman from Ohio,” a couple of weeks before he died.

Lori Stokes was married to Brian Thompson, a reporter currently working with NBC 4 New York. The couple met in 1996. The two got married two years later.

”You knew something great and bold and a revolution was happening in the living room.”

”Hard to find the words. If there was ever a human of brilliance, wit, humility, sisterhood, and warmth it was Cokie Roberts.”

”Never forget the lives lost and the heroes who selflessly risked it all to save them. 9/11 🇺🇸”

As a result of her work, Lori has received several awards, including a George P. Foster Peabody Award (established in 1940 by a committee of the National Association of Broadcasters, Peabody Award winners include producing organizations, online media, networks, television and stations, and individuals from around the world) for her coverage on the September 11th World Trade Center attacks.

For a brief time in 2003, Lori was removed from WABC-TV’s Eyewitness News This Morning and replaced with news anchor Sade Baderinwa.

In 2016, Lori was included on the Ideagen Power 100 List, recognizing individuals empowering girls and women worldwide.

In 2013, she received the Congressional Black Caucus Celebration of Leadership Award in recognition of her civic service.

During her time at NBC News, Lori covered the death of John F. Kennedy, Jr. and the Columbine High School Massacre.

Stokes earned most of her wealth working as a journalist and being a TV co-host. In the present day, she is a co-host of Good Day New York on Fox 5.

Lori was actually the first African American to broadcast on MSNBC. During her career, Lori has covered numerous events, including – the capture of Osama bin Laden, the death of John F. Kennedy, Jr., and the Columbine High School shooting.

Her current salary was not released to the public, but it is thought to be around $375,000 per year.

Togher with her siblings, she has inherited the wealth that remained after her father passed away. He served 15 terms in the US House of Representatives (a member of the United States Congress has an annual salary of $174,000) and wrote a book (The Gentleman from Ohio) that sells pretty good on Amazon.

Therefore, American journalist a Lori Stokes has an estimated net worth of $11 million.

READ THIS NEXT: Who is Nia-Malika Henderson?