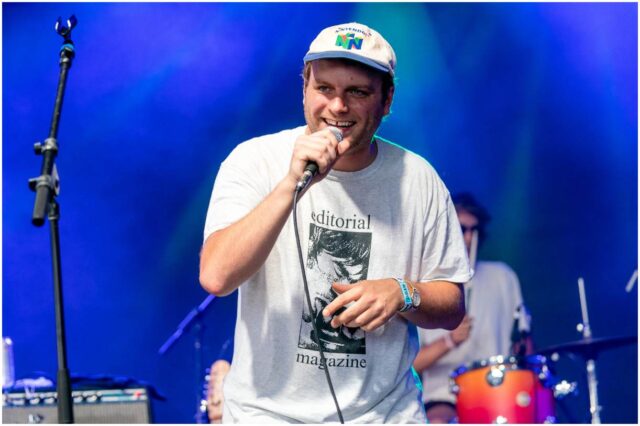 What is Mac DeMarco’s net worth?

His grandmother is an opera singer.

Mac is of Italian descent.

To spite his absentee father, his mother Agnes changed his name to McBriare Samuel Lanyon DeMarco when he was 5.

For junior high, he went to McKernan School. He resisted music for a long time. Mac said:

“Then I tried it when I was 14 or so and I loved it because I was better than all the other kids at it. And the chicks liked it.”

”I don’t know if it made me more desirable but I thought it did. And you just get hooked at that point.”

During high school, Mac was in a few bands, including:

In 2008, he graduated from Strathcona High School in Edmonton. Then, DeMarco became a backing musician. He also moved to Vancouver.

In 2009, Mac released his debut album, ”Heat Wave,” under the artist name of Makeout Videotape. The album sold out its 500-unit run.

The success of his mini-LP paved the way for the release of his debut studio album, ‘2,’ in the same year.

On April 1, 2014, Mac released a second album, entitled ”Salad Days,” along with debuting the lead single “Passing Out Pieces.” The record was a shortlisted nominee for the 2014 Polaris Music Prize (a music award annually given to the best full-length Canadian album based on artistic merit). In addition, it was awarded the “Best New Music” designation from Pitchfork.

In 2013, he spent his time touring around with his album.

On August 7, 2015, DeMarco released a mini-album – ”Another One.” He described the mini album to be a collection of love songs:

“It’s just kind of like every angle of how somebody might feel if they’re having strange feelings in their chest.”

On 2015’s mini-LP ”Another One,” DeMarco read out the address of his flat in Brooklyn so fans could stop by for a cup of coffee. Over the next 12 months, “a couple thousand” people came to visit. Mac said:

“We made a lot of coffee. A couple of times people kind of overstayed their welcome a little bit, but for the most part, they were just nice people.”

”My girlfriend didn’t like it, neither did my roommate. I mean, they were game for a while but it gets crazy.”

On July 8, 2015, he released a 9-track instrumental album titled Some Other Ones and called it a “BBQ soundtrack.”

On May 5, 2017, he announced his 3rd studio album, ”This Old Dog.” In addition, Mac released 2 singles from the album on the same day.

On April 8, 2018, he appeared on FishCenter Live (an American talk show hosted by Andrew Choe, Matt Harrigan, Dave Bonawits, and Max Simonet) and had an interview with Max Simonet.

On May 10, 2019, he released his fourth studio album, titled ”Here Comes the Cowboy.” He shared the first single off the album, “Nobody.” The album was released on DeMarco’s label, Mac’s Record Label. It debuted at number 10 on the US Billboard 200. He said about the album:

“This one is my cowboy record.”

”Cowboy is a term of endearment to me, I use it often when referring to people in my life.”

In 2019, a controversy emerged once it was pointed out online that his last album (”Here Comes the Cowboy”) shared a similar title to the 2018 album ”Be the Cowboy” by Mitski (a Japanese-American singer-songwriter and musician). In addition, her album had included a single called “Nobody.”

According to Pitchfork, Mac had:

“never listened to Mitski’s album and learned about her album and song title only after determining his own album title and single.”

“I’m 100% sure mac & I just went fishing in the same part of the collective unconscious!.”

He has pointed to artists like –  R. Stevie Moore, Isao Tomita, Ariel Pink, and John Maus as influences on his reel-to-reel production style.

On October 10, 2017, he appeared on Charlie Rose (an American television journalist and former talk show host), in which the two discussed the new album, as well as Mac’s relationship with his father (who left when DeMarco was quite young and met him rarely in the following years). He once said:

“I’ve been trying to not turn into him. That’s the last thing I’d like to do, since I was a young kid.”

His grandfather (also named Vernor Winfield MacBriare Smith) was a judge of the Court of Queen’s Bench of Alberta. His great-grandfather is Vernor Smith, Alberta’s former Minister of Railways and Telephones.

On February 23, 2017, he appeared on the Hot Ones YouTube show (a web series created by Christopher Schonberger and produced by First We Feast and Complex Media).

Mac toured with a Canadian band called the Japandroids.

He records his music on reel-to-reel tape recorders, like – an Alesis Micro Limiter, a Tascam 334, a Fostex A-8, and a Roland Space Echo RE-201. Also, in an interview with Mr. Wavvy, Mac suggested that he would release Makeout Videotape material on vinyl in the near future.

DeMarco has cited Haruomi Hosono (a Japanese singer, songwriter, musician, and record producer who is credited with shaping the sound of Japanese pop for decades) as his favorite artist.

On March 30, 2015, he made his first talk show appearance when he performed the song “Let Her Go” on Conan.

Other famous musicians are David Crosby, TK-N-Cash, and Cari Fletcher.

DeMarco earns most of his wealth from selling copies of his albums (Here Comes the Cowboy, This Old Dog, Salad Days, and 2), selling tickets to his concerts, sponsors, and advertisements on his YouTube channel (about $750k).

Therefore, Mac DeMarco has an estimated net worth of $2 million.

READ THIS NEXT: Facts about Hilary Hahn