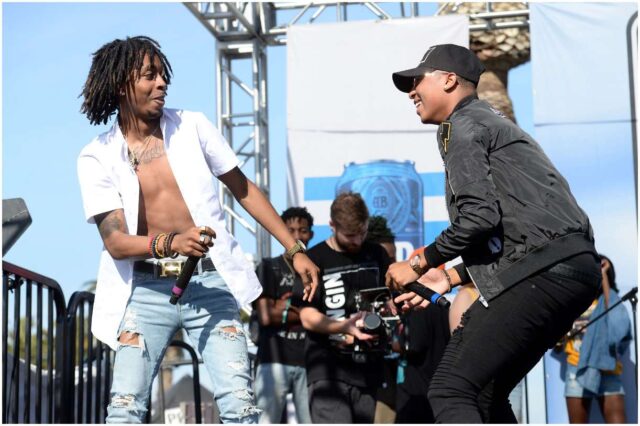 With skyrocketing demand for hooks, features, and writing TK N CASH are carving out a unique space in the market, complete with thousands of screaming, ticket buying, video sharing, sign-making fans, and song downloading.

In 2008, Tevin Thompson and Derrin Towsend moved to Atlanta where they wasted no time in making a name for themselves. After performing in a ”Disturbing tha Peace” (Ludacris) talent search, TK-N-Cash was quickly offered a deal with the recording label.

After making a few popular records in Atlanta, the duo started working with artists like Meek Mill (an American rapper and activist who formed a short-lived rap group – The Bloodhoundz) and Kevin Gates.

In the fall of 2011, they were selected to join the Scream Tour, one of the highest-grossing urban tours aimed at teens and young adults.

The duo has written songs for the industry’s biggest names, like – Juicy J, Trey Songz, Pitbull, and Flo-Rida to name a few.

“When songwriting really started happening, you really have to take that opportunity and run with it.”

In 2015, after a few years of steady grinding, the duo started popping several regional hits, including “3 In a Row” and “Mind Right,” which received a remix with 2 Chainz.

“We’re looking to be that next breakthrough artists of 2016. From there, the sky is the limit.”

”It’s not just music, we’re in it for the long haul and we are really trying to do everything that’s possible that we can do.”

When asked about how did the group formed, Cash responded:

”We are both from Augusta, Georgia. My brother and TK’s father put us together. We recorded music and kept recording music until the group was formed and here we are.”

When asked about how long they have been making music for, Cash explained:

When asked about how they are handling all the attention they are receiving, Cash said:

”For me, I’d say time. Organizing your time. There’s no structure to this. It’s so spur of the moment that you can’t really put it in a real schedule.”

”We still new, so it’s going to take time. But, we stay prayed up and go. Prayer is the key. Just be focused at all times and keeping the right people in your corner.”

When asked about why they have signed for Columbia Records, Cash said:

”We chose Columbia because they decided to hear more songs than “Mind Right” and they really saw our vision.”

”They were talking about everything that we wanted as far as our career. It was really the best decision to make in going to Columbia.”

READ MORE: What is the net worth of Nicky Jam?

Thompson was born on April 16, 1993. He is one-half of the rap duo, representing the TK half of the group.

Tevin has always been a dynamic performer and was already established at the age of 8, performing at various venues and opening for artists such as Hurricane Chris, Trey Songz, and Rasheeda.

Thompson also used to do jingles for Flacos Production Company, a company his brother was associated with.

Tevin cited during his launch as a solo artist:

”So it’s just natural to grow and that’s something I had to do. But I’ve always moved as my own individual, you know what I’m saying? Like in the studio, I always follow my mind, my first instinct, so the transition wasn’t hard at all.”

Cash, born Derrin Towsend, is working on his dreams since the tender age of 12. That willpower has fueled his fire to invade and occupy the industry at all costs.

The duo was on the “Young Hustle” tour, alongside other rising acts like Tate Kobang, T-Wayne, and Rich the Kid.

When asked about what advice they have for upcoming Atlanta rappers, Cash quoted:

”Stay consistent and stay perfecting your craft. But overall keep God first at all times and be yourself and you will be good.”

When asked if they have any collaborations in the works, Tevin responded:

”On the tape, Collaboration-wise, we got Ty Dolla $ign, Young Scooter and some things we can’t name just yet.”

”We are trying to focus on ourselves. This project is more so about us so we’re not trying to have too many features.”

The duo earned most of their wealth by selling albums, selling tickets to their concerts, sponsors as well as advertisements on their YouTube channel – which has over 50 million views (about $100,000 in revenue). Therefore, TK-N-Cash has an estimated net worth of $0.9 million.

READ THIS NEXT: Who is Mozart La Para’s wife?