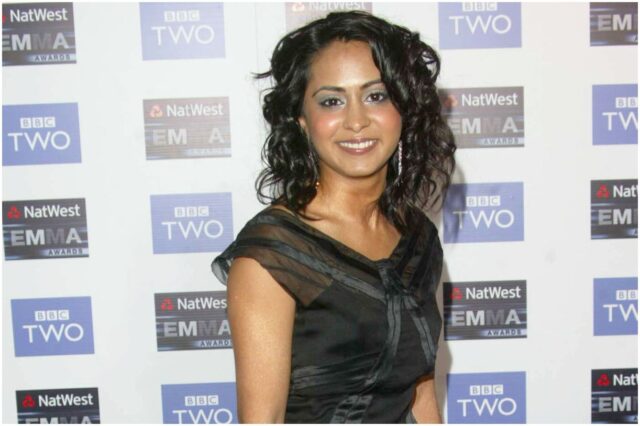 What is Parminder Nagra’s net worth?

In 2012, Nagra played a major role in the drama Alcatraz. However, she is best known for starring as Jess in ”Bend It Like Beckham” and as Dr. Neela Rasgotra in the TV drama ”ER.”

She was born on October 5, 1975, in Leicester, Leicestershire, England, the United Kingdom.

Her mother worked in a factory, while her father is a bookkeeper.

Her parents emigrated from the Indian state of Punjab to the United Kingdom in the 1960s.

She attended the Northfield House Primary School in Leicester.

Nagra made her TV debut in 1994, with a small role in the television series – ”Casualty.”

Nagra rose to fame after playing the football-mad teenager – Jess Bhamra in the 2002 film – ”Bend It Like Beckham.”

”I really identified with Jess, because my own dream was acting, which isn’t the most conventional profession.”

The low-budget film earned $73 million against a $6 million budget.

Other stars in the movie include:

The movie was directed, written, and produced by Gurinder Chadha.

Interesting fact – her character Jess’ scar was not part of the original script. But, the scar was added in based on a real scar Parminder had on her leg.

Nagra first met Keira Knightley (who was almost ten years younger than her) during the audition for the role.

During an interview, Parminder recalled:

Nagra went on to say:

The TV series explores the inner workings of a Chicago hospital. It ran for 15 seasons. ”ER” first aired in the United States on September 19, 1994.

The original starring cast consisted of:

On July 11, 2007, Parminder was awarded an Honorary DLitt from Leicester University.

From 2013 to 2014, she played the CIA agent Meera Malik in the 1st season of the NBC crime television series called – ”The Blacklist.”

In 2018, Nagra starred as Dr. Lapham in the Netflix film – ”Bird Box” alongside Sandra Bullock.

On its first week of release, Bird Box was watched by more than 45 million Netflix accounts. The movie is based on the novel of the same name by American novelist Josh Malerman.

In 2018, she starred as counselor Priya Singh in the 2nd season of the TV series titled – ”13 Reasons Why.”

On January 17, 2009, Parminder Nagra married James Stenson, a filmmaker and photographer who is specialized in celebrities and documentary films.

James Stenson has shot for:

Nagra and Stenson tied the knot after dating for about seven years. The two married in two different ceremonies. Their wedding ceremony was attended by John Stamos and Scott Grimes – two of Nagra’s ER co-stars.

On February 8, 2012, Parminder filed for divorce at LA Superior Court, citing ”irreconcilable differences” as the main reason behind the split.

Later that year, James filed a lawsuit against Nagra. He claimed that he gave up a $300,000 yearly paycheck as a shutterbug photographer to live with his wife in LA (when Nagra got the “E.R.” role in 2004).

Following their divorce, James got $1,226 per month in child support for their son. Parminder received:

READ MORE: What is the net worth of Amber Marshall?

”Everybody’s upfront about it here (Los Angeles). They go, ‘I’m seeing three other people this week.’”

”If I can inspire someone to go in a positive way and pursue a dream, it can only be good.”

”(On Paul Abbott) I did meet him, but I actually ended up meeting him in LA, which is just bizarre because I was doing the film in the East End.”

”I’m actually going into ER as the new British intern.”

In 2004, she was one of the bearers of the Olympic torch as it passed through London on its way to the Summer Olympics in Athens.

A portrait of the actress that is painted by Stuart Pearson Wright (an English portrait artist and winner of the BP Portrait Award for his painting of 6 presidents of the National Academy) hangs in London’s National Portrait Gallery.

In 2002, Parminder was the first-ever woman to win the FIFA Presidential Award for her role in the movie – ”Bend It Like Beckham.”

In 2001, she voiced a Muslim girl in the drama about women who choose to wear the Muslim headscarf, titled – ”Arena: The Veil.”

Nagra earned most of her wealth from appearing and starring in 46 films and television series. She is best known for her roles in – The Blacklist, Bird Box, Intergalactic, ER, D.I. Ray, and Bend It Like Beckham.

Therefore, British actress Parminder Nagra has an estimated net worth of $4 million.

READ THIS NEXT: Who is Amy Jo Johnson?