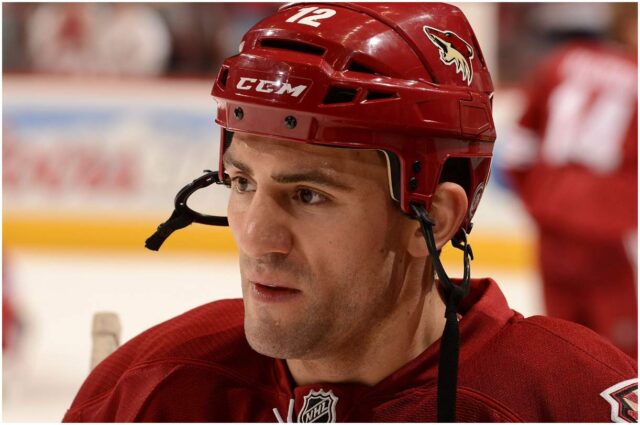 Paul Bissonnette, better known as Biz Nasty, is a Canadian former professional ice hockey player who played for the Phoenix Coyotes and Pittsburgh Penguins in NHL.

He is also a co-host of the Barstool Sports’ Spittin’ Chiclets podcast.

His father was a steelworker, while his mother was an Office Administration professor at Niagara College.

In 2003, Bissonnette won a gold medal representing Canada at the IIHF Under-18 Championships.

In the same year, he was selected in the fourth round by the Pittsburgh Penguins (121st overall) in the NHL Entry Draft.

In 2005, he began his professional career with the Wheeling Nailers.

On February 25, 2006, Paul scored his first professional goal in the AHL. He recorded his first career NHL point — against the Philadelphia Flyers — on January 13, 2009.

He signed with the Cardiff Devils of the EIHL on November 1, 2012.

On July 8, 2015, Bissonnette signed a one-year contract with the Ontario Reign.

Paul signed a one-year extension with the Ontario Reign on July 6, 2016.

He officially confirmed his retirement from professional hockey on September 7, 2017.

Also in 2017, Paul announced that he would join the Coyotes’ radio booth as a color commentator. About one year later, Paul had become a new member of Spittin’ Chiclets — the Barstool Sports’ hockey podcast.

Paul and Canadian filmmaker Pasha Eshghi released a mockumentary series called – ”BizNasty Does BC” in 2018.

Bissonnette said to Sporting News Canada about his mockumentary:

On May 14, 2018, ”BizNasty Does BC” was bought by Barstool Sports. The mockumentary follows Paul as he meets 17 past and present National Hockey League stars.

”It does get exhausting, too, trying to entertain people and constantly be creative and funny.”

”I think we’re all creatures of habit.”

”I gave my handicap as if we were playing from further back.”

”I think I have the advantage all the time, for the simple fact that I’m doing something I love.” (AskMen)

Bissonnette earned most of his wealth from playing as a professional ice hockey player for Cardiff Devils, Phoenix Coyotes, and Pittsburgh Penguins. During his professional career, Paul earned over $2.8 million from his contracts.

He also serves as a sports advisor for CaniBrands, a CBD products company. Furthermore, Paul is sponsored by New Balance.

In addition, he serves as a host on the Barstool Sports hockey podcast Spittin’ Chiclets, as well as the color analyst for the Arizona Coyotes radio.

Bissonnette’s annual salary at Spittin’ Chiclets was not released to the public.

In 2021, it was announced that Bissonnette joined Turner Sports as a studio analyst.

READ THIS NEXT: Who is Claressa Shields?