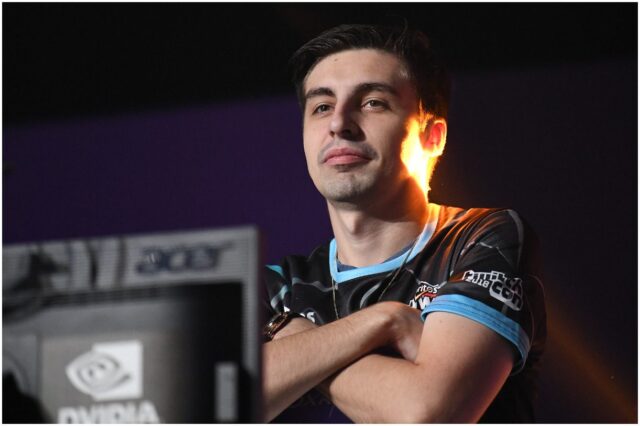 What is Shroud’s net worth?

He has gained a massive following on Twitch and YouTube for his gameplay in first-person shooters and battle royale-style games—like Apex Legends, Valorant, Escape from Tarkov, and Battlegrounds.

He’s also the owner of one of the most-followed channels on the Twitch platform.

He’s been nominated for multiple content creation and gaming awards, and in 2019 he won The Game Awards Content Creator of the Year title.

By 2021, the entertaining Canadian had racked up nearly 10 million Twitch followers and another 6.8 million YouTube subscribers—but he once broke fans’ hearts around the world when he bailed on Twitch to join the Microsoft Mixer platform.

Eventually, he returned to his rightful place on the Twitch throne.

Here’s what we know about the celebrity gamer known as Shroud.

READ MORE: What is Doublelift’s salary?

Shroud was once known to gamers as mEclipse—but his real name is Michael Grzesiek.

Shroud made the move to Los Angeles once his streaming career started to gain momentum.

READ MORE: How much money does Faker make?

A Rise to Gamer Stardom

Grzesiek launched his career as a streamer early on, but he always had an amateur love of video and PC games.

He initially played for compLexity Gaming, which was bought out by Cloud9 in mid-2014.

By 2016 he had secured a winning finish at the ESL Pro League Season 4 for Counter-Strike: Global Offensive.

Hot on the heels of that victory came a second-place finish at ESL One Cologne in 2017.

Shroud didn’t rest on his laurels when he left Cloud9—in fact, he got bigger after that.

He made the move to full-time live streaming on Twitch, where he could play whatever games he wanted.

And clearly, he wanted to play a lot of games, because he’d racked up more than 9,000 hours of streaming time on Twitch by mid-2021.

That’s 375 days of continuous gaming and chatting with his followers, if you put it all together.

The consistency and commitment Shroud showed to his chosen platform paid off—he earned 455 million views in that time.

He also made history on March 10, 2019, when his follower count more than doubled that of the 2nd most followed Twitcher’s total follower count.

In October 2019, Shroud announced that he was going to stop streaming on Twitch and make the move to Microsoft’s Mixer platform.

The announcement took Shroud’s following by surprise, as he had previously claimed that he wanted to take advantage of Ninja’s exit.

Following the transition to Mixer, Shroud said he knew it was the best decision for his career as soon as he started with Mixer.

He attempted to assure fans that they could come with him—many of his fans paid a subscription to watch his streams.

As part of the move, Mixer agreed to offer free subscriptions to his channel for a limited time.

The move was seen by many in the industry as the start of a mass exodus from Twitch.

In June 2020, Microsoft officially announced that it was shutting down Mixer.

It offered Michael and several other gamers who had made the doomed move a lucrative Facebook contract—which Michael declined.

The next several weeks were an unsure time for Shroud—and his fans.

The gamer had already convinced many to move with him to Mixer, and now they weren’t sure what the next move would be.

He posted to Twitter to assure them, “I love you guys. [I] Am figuring out my next steps.”

That next step, as it turned out, was a return to where it all started: Twitch.

On August 11, 2020, Shroud took to social media to let his followers know he was going to be streaming exclusively on Twitch.

Over the next few hours of the stream, he maintained an active viewer count of between 400-475,000 as he played Valorant.

Shroud dated a girl named Jessica Rago. Jessica and her sister, Janice, are one-quarter Irish, half-Korean, and one-quarter Italian. Rago and her family have lived all over the world for many years, including 6 years in Germany.

Jessica currently works at Loaded.gg, a content creation and gamer management agency, as a talent manager. In addition, Rago is a Twitch streamer and is active by the name of ”Dacchei.”

In January 2019, the couple separated. It was first announced on Twitter.

She became a content creator for the esports organization CLG in 2018. Hannah also has over 546k followers on her Twitch account.

READ MORE: Who is Leena Xu?

Many people are wondering how much money does Shroud make? Here are the details:

Grzesiek earned most of his wealth from playing CS: GO in tournaments as part of the Cloud9 roster, sponsors, streaming on Twitch, and ads on YouTube.

Some of his tournament wins are:

In all his tournaments, Mike has earned over $293k in prize money.

Out of the tournaments awarding cash prizes that Grzesiek had from winning ESL Pro League Season 4: Finals on October 30, 2016 – $40,000.

Also, Mike has a YouTube channel that has more than 947 million views, meaning around $2.85 million in revenue before taxes.

Shroud makes a total of $2 million per year from streaming, YouTube, and sponsors.

According to reports, Mike received $10 million to switch to Mixer. Due to the Mixer deal, Grzesiek made about $12 million in 2019.

Therefore, American streamer Shroud has an estimated net worth of $18 million.

READ THIS NEXT: Phreak Net Worth