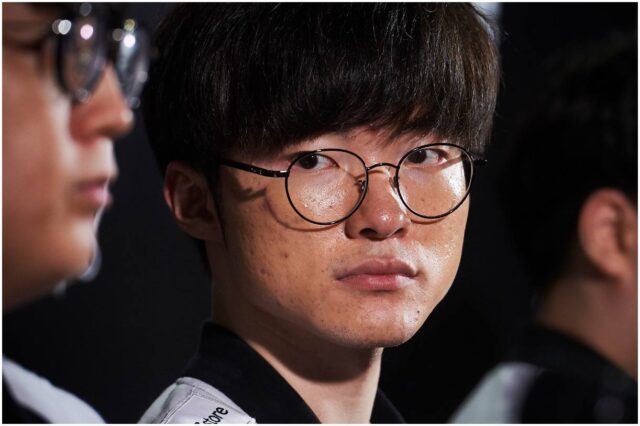 Faker (real name – Lee Sang-hyeok) is a Korean League of Legends player who is known for his hyper-aggressive playstyle in the mid lane.

He is considered the best overall League of Legends player in the world.

He was born on May 7, 1996, in Gangseo District, Seoul, South Korea. Lee currently lives in Seoul.

Faker has an older brother who is also a gamer.

Lee dropped from Mapo High School for his gaming career.

He went to the same high school as Deft, a South Korean professional LoL player who currently plays for DragonX.

He created custom maps for World of Warcraft 3, especially DotA and Footman Frenzy.

Lee began playing LoL under the name “GoJeonPa” when the Korean server opened in December 2011. Faker climbed the Korean ladder and became a strong mid-laner.

Lee said in an interview:

”I didn’t put a lot of effort into League of Legends. But I got the rank one. I suppose I’m suited for being a professional gamer.”

Faker went on to say:

”I don’t get mad easily. Everybody asks me, ‘How do you manage your mental?’ I said, ‘I was just born like this.’ At a recent personality test, they said I am a robot.”

In the 2013 season, he earned the title of the best player in the world due to his amazing performances. He was the Season MVP in the HOT6iX Champions Summer 2013.

In the same year, Lee was awarded Best Mid Laner at the Korean eSports Awards.

In the 2014 season, his team swept Samsung Ozone in the finals, and Lee proved himself as the greatest League of Legends player of all time.

In 2015, Faker won the Republic of Korea e-Sports Popularity Award.

At the 2017 World Championship, SKT was defeated by Samsung Galaxy 3–0.

In the 2018 Korea Regional Finals, his team finished fourth, failing to qualify for the World Championship.

During Worlds 2019, after SK Telecom’s second victory against Splyce in the quarterfinals, Lee reached 100 international wins. Later, his team was once defeated by G2 Esports in a semifinals series.

”I believe that rosters from both last and this year are very strong. Because I failed to win Worlds last year, I’m now confident in myself that I’ll perform well this year.”

”Whether it’s last year or this year, I think that we’re still a championship-contending team.”

He also became a part-owner of T1 Entertainment & Sports. He said:

”I am honored to become a part-owner of T1 and look forward to working with the leadership team beyond my playing career.”

”I love this team and am proud to help mold the future of this organization.”

Faker has over 3.7 million followers on his Twitch account.

There is no information about Faker’s girlfriend.

At All-Star 2015, he brushed his teeth with shower gel due to the fact that there was no toothpaste.

The vice president of Riot Games, Dustin Beck, said Lee is the “Michael Jordan” of LoL in a press conference at Staples Center.

He has several nicknames, including ”White T-shirt collector.” According to Dot Esports, he said:

“I don’t care about my clothes. If clothes have patterns or colors, it’s confusing which one’s clothes are.”

”I recently realized all of the white shirts look like mine, so they’re easy to find.”

Other famous LoL professional players are Bjergsen, Imaqtpie, and IWillDominate.

Moreover, Lee receives money from T1. Faker’s annual salary is not known exactly, but it is rumored to be more than $2.5 million. On February 18, 2020, Lee had re-signed with T1 for three years, the maximum length permitted by Riot Games. Prior to his new contract with T1, Lee said he turned down a $10 million salary.

He is also a part-owner of T1 Entertainment & Sports. In addition, Lee makes money from streaming on Twitch.

Therefore, League of Legends esports player Faker has an estimated net worth of $6 million.

READ THIS NEXT: Who is Corinna Kopf?