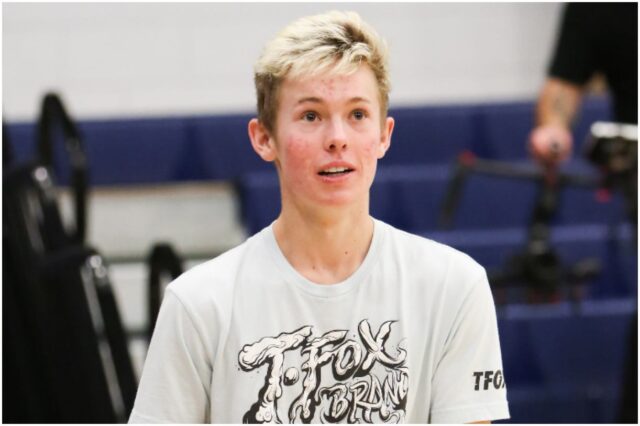 Tanner Fox is an American professional stunt scooter rider who is best known for his self-titled popular YouTube channel.

Tanner has a sister named Lindsay. They grew up in San Diego, California. Their mother is Ronda Fox.

On the channel, Tanner documents his many adventures, such as messing around on trampolines, sky diving, and riding many different motor vehicles.

At the time of writing, his channel has over 10.4 million subscribers and over 2.1 billion views. The most popular video on the channel is titled – ”We Do It Best.”

He currently lives in a mansion with other YouTubers, like Jordan Beau and Maverick (Monstermav).

At the end of 2016, Tanner bought his mother her dream car.

Tanner has modified his Nissan R35 GT-R with a green wrap. He later called the car “Guaczilla.”

In September 2018, Fox made more modifications to the car. The car was renamed as Guaczilla 2.0.

Tanner Fox used to date Taylor Alesia, a social media star who has over 2.3 million followers on Instagram.

In 2018, Alesia released the song “Speechless.” After they broke up, Taylor started to date Matt Freeman.

In 2019, Tanner began a relationship with Avalon Nadfalusi, a model who began modeling at age 14.

”I’m so sick of waking up with 0 actual direction on what matters to me.”

”No greater stress than love.”

”Been seeing some controversies… you decide.”

”Make the future something you can look back on.”

”Every time I get super anxious about doing something, it turns out amazing and so much fun. Why do I worry.”

On June 30, 2018, Fox participated in the ACE Family Charity Basketball Event with many other popular YouTubers.

”You a salty fanboy and I know that
do what makes you happy
Is it Tanner or Rufus the mole rat?
Bro, can you stop DM’ing me?
Nooooo, you cannot be friends with me”

At age 11, Tanner was kicked out of a private Catholic school, for filming in class and uploading it on YouTube.

“We are super hyped on this collaboration and it’s something we’ve been working on for a long time.”

Sean Holladay went on to say:

“It’s the first time an esports organization + influencer has partnered with Hot Wheels to create a product that will be sold at major retailers.”

He had a collab with Adam LZ in a YouTube video.

Fox earns most of his wealth from advertisements on his popular YouTube channel. His 2,1 billion views earned him around $6 million before taxes.

Tanner has his own merchandise shop called TFox.

Moreover, he makes money from sponsors. For instance, Hot Wheels (a brand of die-cast toy cars that was introduced by toymaker Mattel in 1968) made a custom Nissan GT-R Guaczilla for Tanner’s 17th birthday in December 2017. The car sells for about $8.99 on Amazon.

Therefore, YouTuber Tanner Fox has an estimated net worth of $5 million.

READ THIS NEXT: Who is AzzyLand?