Taylor Sheridan is an American actor, director, and screenwriter behind films like Sicario. In addition, Taylor performed as David Hale in the drama ”Sons of Anarchy.”

Given his impressive career in the industry, Taylor Sheridan has amassed an impressive net worth as a result.

His brother is journalist-author John Gibler.

His family lived minimally on a ranch in Cranfills Gap. He said about his childhood:

“We lived out in the country and we didn’t have cable. My parents were old Texans and on Saturdays, they would play Westerns or films from the ’60s and ’70s.”

“Where I grew up, my salvation was in the solitude. Friends weren’t something you had.”

After high school, his parents divorced.

He graduated from Texas State University.

Later, he went to Los Angeles and pursued an acting career. 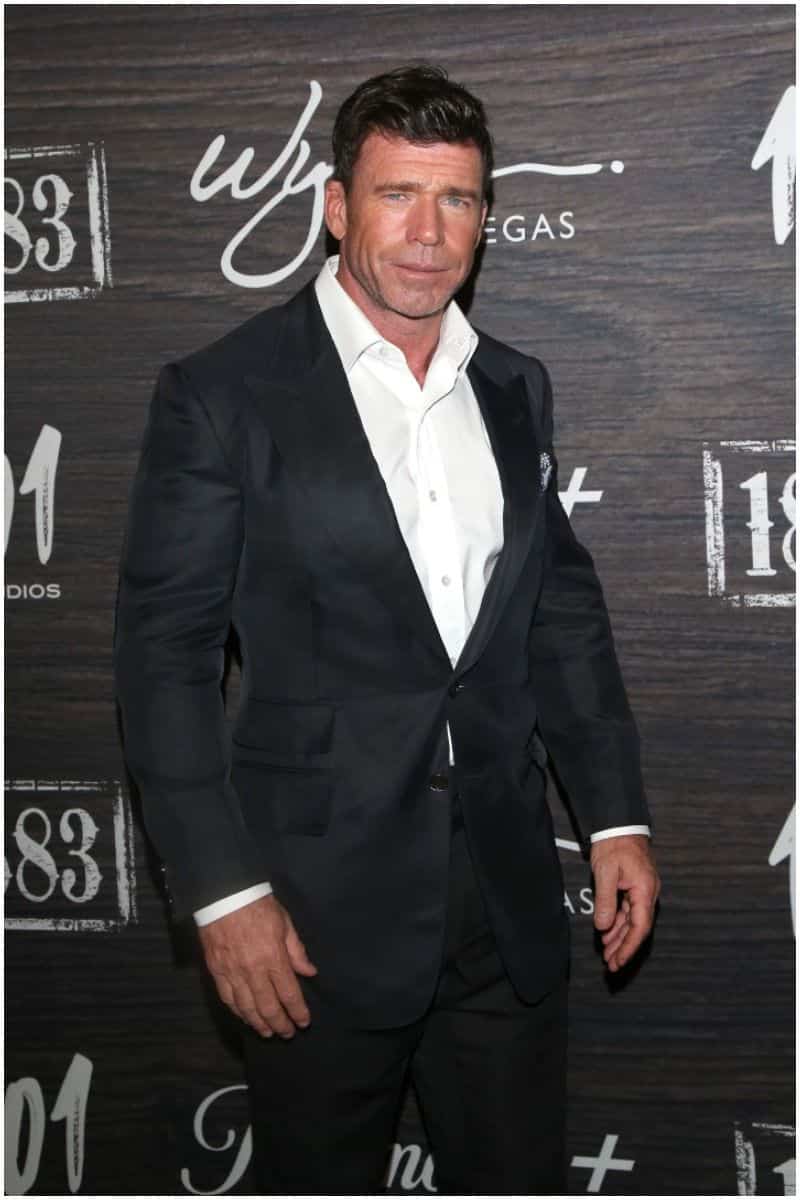 From 2008 to 2010, he appeared in 21 episodes of Sons of Anarchy, a crime tragedy television series that premiered on the cable network FX on September 3, 2008. This TV series depicted an outlaw motorcycle club as an analogy for human transformation.

During an interview with Deadline, he said about the reason he left the series:

“We were renegotiating on Sons after the second season and I had one idea, and the studio had a different idea. Everyone on the show was making twice what I’m making, the other series regulars.”

Taylor went on to say:

“We’re not talking about the stars. And I’m on the DVD [cover] bro; only two people on it. I say, ‘Why is this all you’re offering me? It seems unfair.’”

In an interview with Esquire, he said:

“I was making 150 and I had to be exclusive. After you pay your taxes and your manager, you might clear ninety. I had a baby boy and a wife.”

In 2011, he directed Vile, a horror movie that follows ten kidnapped captives who have 22 hours to mount an escape from a locked room.

Interestingly, Sheridan does not consider Vile his directorial debut. He explained in a 2017 interview:

“A friend of mine raised – I don’t know what he raised – 20 grand or something, and cast his buddies, and wrote this bad horror movie [Vile], that I told him not to direct.”

“He was going to direct it and produce it, and he started and freaked out, and called and said, ‘Can you help me?’ I said, ‘Yeah, I’ll try.’”

“I kind of kept the ship pointed straight, and they went off and edited, and did what they did. I think it’s generous to call me the director.” 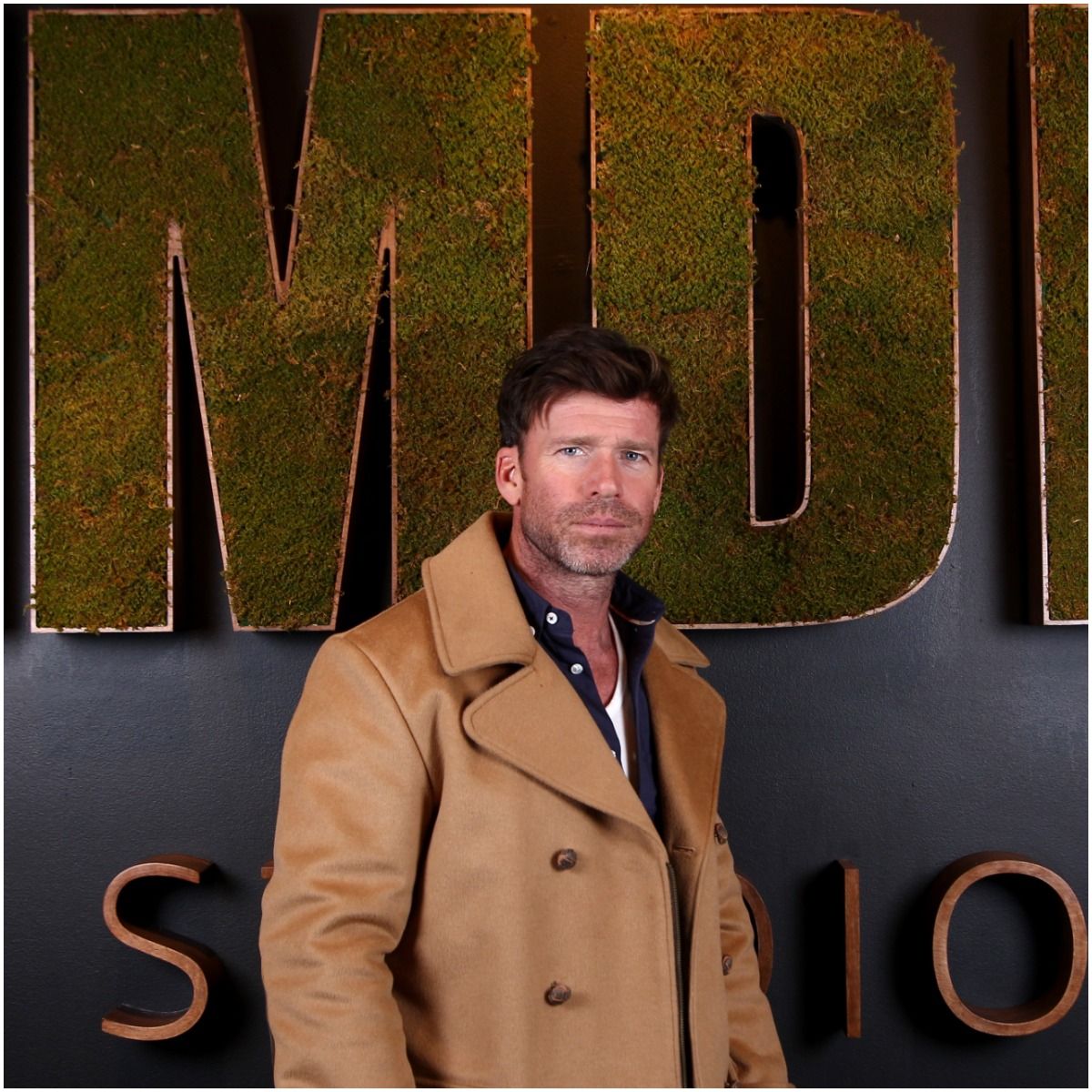 His first film as a screenwriter was Sicario. He said:

“Sicario was the first feature I wrote.”

“I had worked on some really bad movies and really bad TV shows and that’s not counting the ones that I read for and I didn’t get.”

The film follows an FBI agent who is enlisted by a government task force to bring down the leader of a Mexican drug cartel. Some of the stars are – Victor Garber, Josh Brolin, Benicio del Toro, and Emily Blunt.

At first, Taylor didn’t expect the script for Sicario to be produced in a movie. However, the movie was a commercial success, grossing more than $84 million against a production budget of $30 million.

In 2016, he wrote the scenario for ”Hell or High Water,” a neo-western heist film that was directed by David Mackenzie. It grossed over $37 million. ”Hell or High Water” premiered at the Un Certain Regard section of the Cannes Film Festival.

In 2017, Taylor directed “Wind River,” a thriller starring Jeremy Renner. The film premiered at the Sundance Film Festival. “Wind River” raises awareness of the issue of the high number of Indigenous women who are murdered and raped.

Taylor was inducted into the Texas Cowboy Hall of Fame in 2021.

In 2013, Taylor Sheridan married Nicole Muirbrook, an American model and actress who is the face model for Nvidia’s tech Demo, “Medusa.” 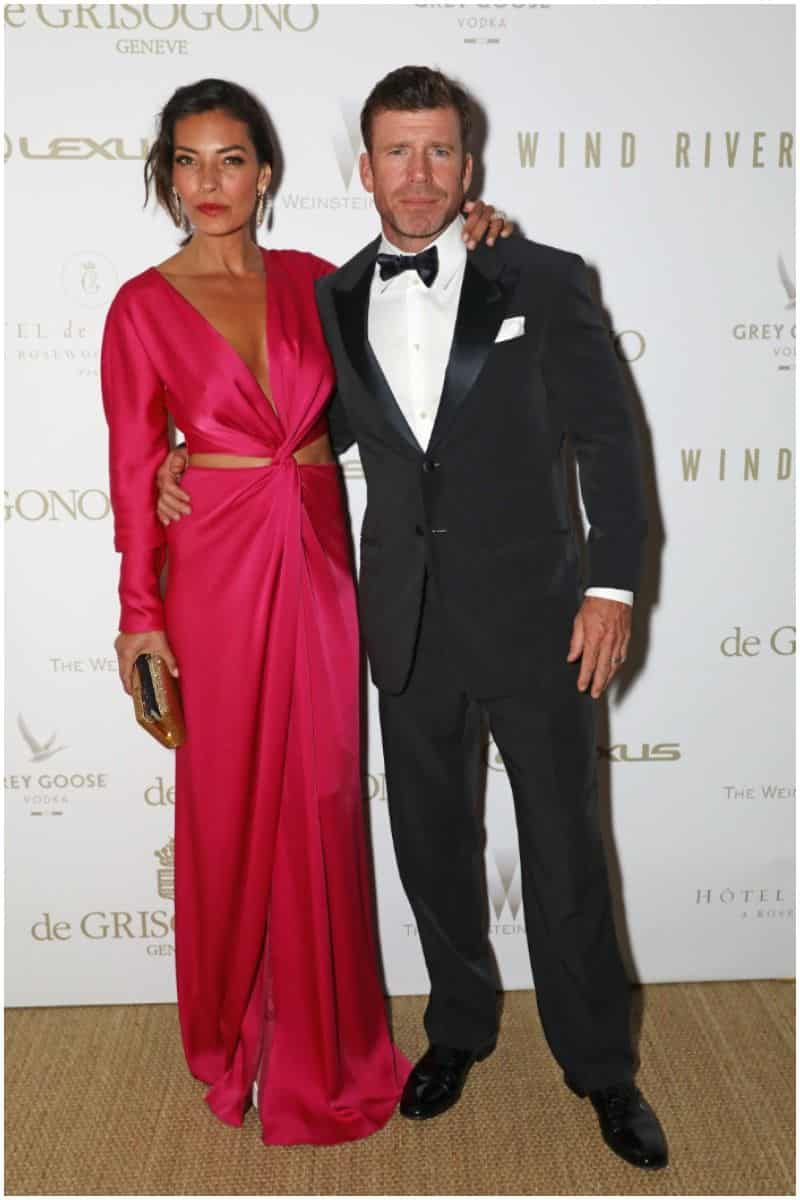 In 2009, Nicole performed in the film “I Hope They Serve Beer in Hell” as Christina. 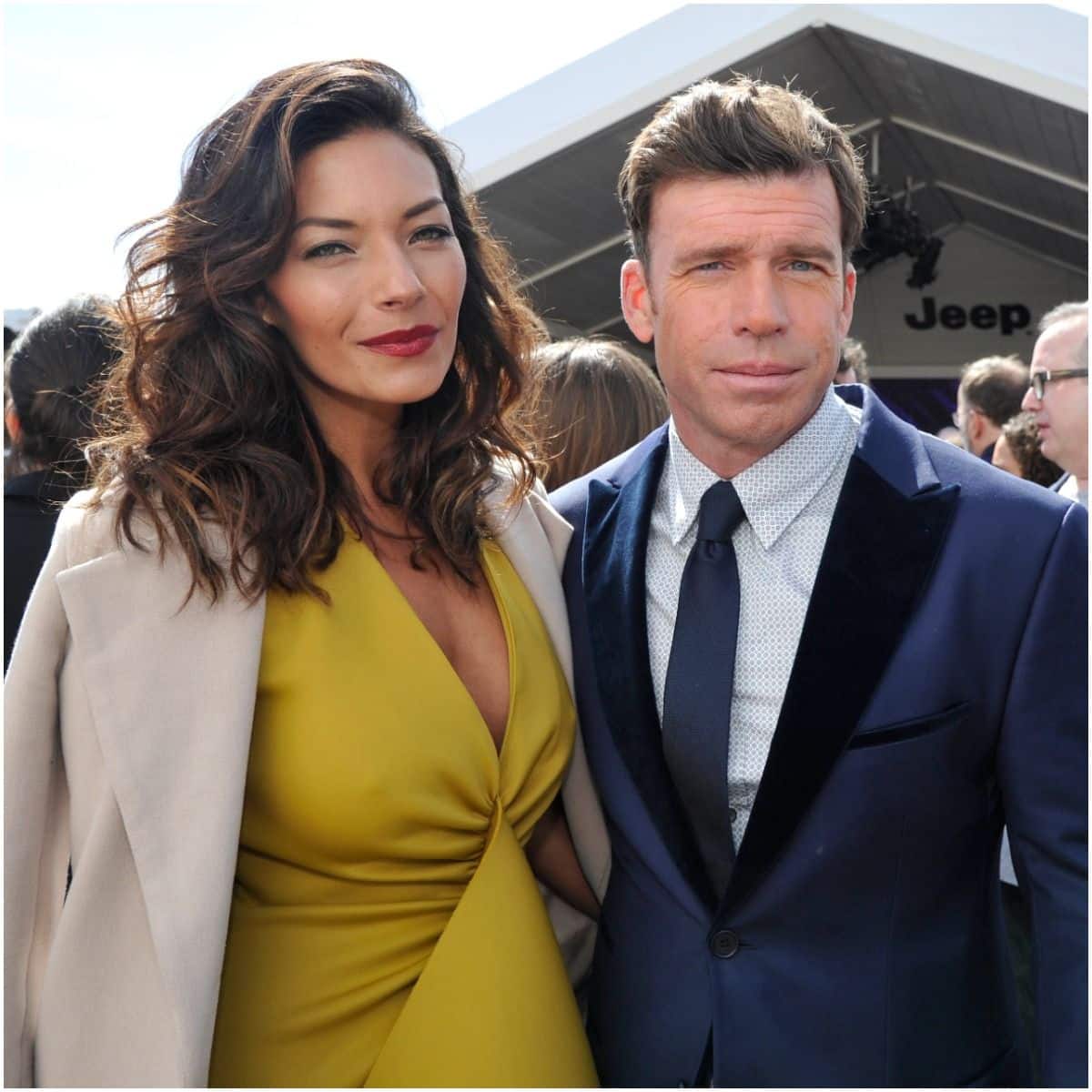 “My mother was an extremely strong woman. She ran the ranch I grew up on. My wife’s a very strong woman, as is my sister.”

“In the late ’90s, I spent a lot of time on reservations, and there was a level of poverty and injustice that I had not witnessed before.”

“It is the great shame of my nation the manner in which it has treated the native inhabitants of North America.”

“There is a story that wants to be told and if you listen, it tells itself very easily.”

“Violence is a harsh reality in America, everywhere. To ignore it is naive. To glorify it is evil. But you have to show it.”

“How can you tell your kid you can be anything you want to be if you’re not trying to do the same?”

“For 20 years I’d spent most of my time reciting lines by people that took shortcuts. Don’t take a shortcut.”

The American actor was nominated for the Writers Guild of America Award for Best Original Screenplay.

Sheridan earned most of his wealth from the scripts for ”Hell or High Water” and ”Sicario” movies, directed by David Mackenzie and Denis Villeneuve respectively.

In addition, Taylor made money from producing Yellowstone, Mayor of Kingstown, and 1883.

In 2021, Sheridan and a group of investors bought the legendary Four Sixes Ranch for $192 million. The property spans 266,000 acres.

In 2022, his latest project, Tulsa King, was released on Paramount+.

Therefore, Taylor Sheridan has an estimated net worth of $25 million.

READ THIS NEXT: Who is Judson Mills?

I have a story line you may want to consider for the next yellowstone it in lnvolves a bear a rifle an American Indian skeleton the little big horn.......this part is for MR Costner and it is more involved than this space allows me my hope is that MR Sheritan or someone on his staff contacts me I want nothing in return.....

Like to know what Taylor does to help the American Indian?? I have learned much about how the AI has been treated,

We have been complaining for years that Hollywood hasn’t had good writers for decades. Along comes Taylor Sheridan and thank God for that! He writes memorable dialogue reminiscent of the great ones: Fitzgerald, Hemingway. His characters in both Yellowstone and 1883 resonate through his brilliant writing. Thank you, Sir for hours of powerful and intelligent entertainment.

Finally the real deal, love the whole package: From his up bringing to his beautiful strong wife, to horse reining and not to mention he brought us Yellowstone & 1883: Can not wait to see what’s he brings us next hopefully a lot of spin offs can’t get enough of Yellowstone and 1883and the truth about Texas and the Indians: Being born and raised in the hill country of Texas this is one of the reasons I left . I have 100 percent Cherokee grandparents on both sides . My father was born on an Indian reservation which Ft.Hood built right over . Being raised proud and Gospel, it was hard learning of the truth after I grew up and had access to google: WADO OGINALII ( means: Thank you my friend in Cherokee)

He writes scripts for movies that people love to watch. Not what film critics like. I liked the movie: Wind River and Hell or High Water. Since I have cattle and horses I like his movies like Yellowstone. Since I put over 30 years in Law Enforcement I know the violence is a little over the top in Yellowstone. I still enjoy watching it. You just have to realize their for entertainment and that is exactly what Taylor gives you a lot of action and entertainment . I like him and I’m glad he bought the 4 Six’s ranch near Guthrie, Texas and plans on filming there and keeping it in it’s original state and not cut it up and sell off pieces.