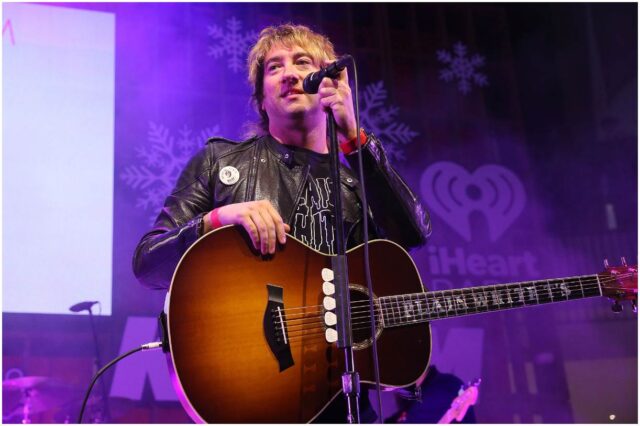 Plain White T’s song ”Hey There Delilah” earned a pair of 2008 GRAMMY Award nominations in the categories of Best Pop Performance by a Duo or Group with Vocal and Song of the Year.

During high school, he played tennis, baseball, and soccer.

In 2003, drummer De’Mar Hamilton was added to the band.

In 2005, the American rock band released its third album, entitled – ”All That We Needed.”

The song “Hey There Delilah” from the album was released in May 2006.

Tom detailed to Chicago Mag the story behind the song “Hey There Delilah”:

”I met a girl named Delilah [a competitive cross-country runner and graduate of Columbia University] in 2003 in Chicago.”

Higgenson went on to say:

”She went to school in New York City, so when she went back to school, I gave her a CD, and I joked with her that I had a song about her.”

Note – at the time, Tom didn’t have the song written, thus, when the girl asked to hear it, he had to write it. Higgenson said:

”I actually [had] to write this song. So I starting writing it, and I got through the first few lines, and I’m like, ‘Wow, this is really good.’”

Note – the real-life Delilah never actually dated Higgenson. But, she did attend the 2008 Grammy Award show as Tom’s guest. Her namesake song was nominated for Song of the Year.

”If it wasn’t for me, I’m sure Tom would’ve been inspired by a different girl and written an amazing song about her.”

”As far as I’m concerned, I was in the right place at the right time and met the right person — just the luck of the draw.”

Later that year, Plain White T’s joined the Rock Band Live tour with The Cab, Dashboard Confessional, and Panic! at the Disco.

On December 7, 2010, the group released another album, titled – ”Wonders of the Younger.” It was produced by Ian Kirkpatrick and was released by Hollywood Records.

Higgenson said about the album:

”We wanted to push ourselves outside of what the Plain White T’s are accustomed to–exploring different arrangements and striving to be more adventurous and exciting lyrically, musically, and thematically.”

Tom is a vegetarian. When asked by Peta why he stopped eating meat, the singer said:

”Just because someone else can kill an animal for you and cut it up and do all the disgusting dirty work, all I have to do is walk into McDonald’s and order it and then I can eat it.”

”I still eat the same kinds of things I used to but without meat.”

In an interview with Chron, Higgenson stated about his diet:

”I’m a vegetarian, so I always stock up with Tofurkey and veggie corndogs.”

”That’d be my must-have food. And every Tuesday, I always make sure to hit up a Best Buy or some kind of store to buy some new releases.”

In the middle of making the first album (Come On Over), Higgenson was in a car accident, where he broke three vertebrae, lacerated a lung, and ruptured a kidney. He said:

”I was driving alone in a van down the expressway and got cut up.”

Tom went on to say:

”The van flipped over eight times, I was thrown out and I woke up in hospital with all my family around me.”

The American singer had to learn to walk again and had a brace on for about three months.

In a 2011 interview, he said about his accident:

”I broke my back and had a lot of internal injuries and, ever since the car crash, I think I haven’t stayed as fit or been as active.”

”I think I am more out of shape than I need to be. I need to start working out and build up the strength that I have lost since the accident.”

READ MORE: Everything to know about Daniel Caesar

When asked about his favorite musician, he responded:

”The Beatles, because they’re the best band and songwriters. Everything about music, they were the best at.”

Higgenson earned most of his wealth from being part of the rock band Plain White T’s. Currently, the band has 8 released studio albums.

Plain White T’s make money from selling tickets to their concerts as well as from selling their albums. Therefore, Tom Higgenson has an estimated net worth of $3.5 million.

READ THIS NEXT: DJ Camilo Net Worth