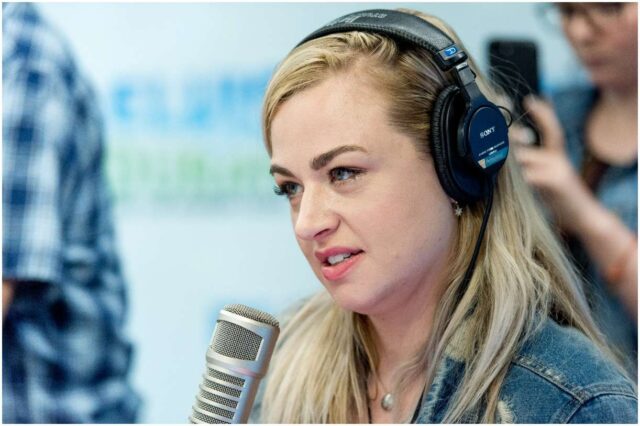 Bethany Watson is a radio personality who is best known as a former co-host of Elvis Duran and The Morning Show.

“Elvis Duran and The Morning Show” is syndicated nationally by Premiere Networks and is the most-listened-to Top 40-morning show in the U.S.

In addition to co-hosting, she also gives hourly news updates during the show and does the daily “What’s Trending” segment, where she features new, fun or valuable products which she thinks the listeners will like.

She was born on December 15, 1984. Bethany was raised in Wisconsin. She attended the University of Minnesota, from where she has a Theatre Arts major.

In August of 2012, she officially started working in the radio program Elvis Duran & the Morning Show. Bethany auditioned four times before she was hired. Interestingly, three of those auditions were live on-air, during all 4 hours of the show.

In February 2018, it came as a surprise to many, but the rumors were true: Watson was leaving the radio program ”The Elvis Duran Show.” The media personality wrote on Instagram:

“As you may have heard this morning, I’ve made the difficult decision to leave the morning show. Elvis is always saying that we need to follow what we’re passionate about, even if it’s not a sure thing.”

”And none of us are promised tomorrow. You all know I love doing projects outside of work like writing, acting and producing, and those are things that I’m incredibly passionate about. So it’s time for me to follow those passions now.”

“She has an exciting journey ahead of her, pursuing so many incredible opportunities in the entertainment industry.”

”It is with the heaviest of hearts that we bid her adieu, but we’re also sure, without a doubt, that our girl is going to fly. So high.#GoodbyeBethany.”

There’s no mention of where Bethany is going exactly, however, her fans know that Watson’s pursuing something in producing and acting.

Since 2016, she is a co-host of Acquired Taste Podcast.

”I’m so grateful to have found someone who puts up with my insanity, loves my big feelings,” Bethany wrote on Instagram in January 2021.

Before getting her first radio job, Bethany worked at a bank. In her 2012 interview with ”Her Campus,” Watson opened up about her decision to leave her banking gig with a good salary by declaring:

“I was working at a bank and realized I hated my job and my life.”

In another interview, she said:

“I told my boss [at the time] there had been a death in my family and I needed to attend the funeral.”

When Watson’s boss asked when the funeral was, she told her:

“From five to nine in the morning on Thursday.”

Bethany has some short appearances in Labeled (2017) and Abnormal Attraction (2018).

”I adore and respect the people I work with every day, obviously. And clearly Howard Stern has been a pioneer in modern radio.”

”My favorite part about my job is all of the experiences I’ve been able to have and people I’ve met that I never would have otherwise. I’ve jumped out of a plane, sung with Wyclef, hugged Shaquille O’Neal, stood onstage at Madison Square Garden, and a million other things.”

”Elvis is a true character. He’s the most generous person I’ve ever met, and I’ve learned a ton about giving back to my friends, family, and community by watching him.”

”I never studied radio, but I did train in improv comedy. Those improv skills are what got me my first radio gig.”

”My eyelashes grow straight and a bit down, so if I don’t curl them, my eyes disappear.”

”I don’t have a lot of free time! But when I do, I listen to a lot of true crime podcasts while I’m getting stuff done around the house.”

Bethany earned most of her income from working in a bank and in the radio program (Elvis Duran and The Morning Show) as well as making a few appearances in several TV series.

Her salary as co-host of Elvis Duran and The Morning Show was not released to the public, but the national average salary for a radio personality in New York City is around $71,000.

In 2020, Watson portrayed Celeste in the short thriller – ”Lonely Hearts.”

Therefore, Bethany Watson has an estimated net worth of $1 million.