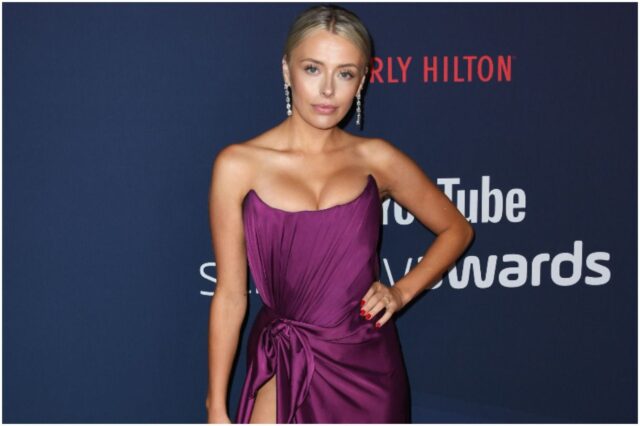 What is Corinna Kopf’s net worth?

Kopf started her YouTube channel on June 3, 2016. At the time of writing, Kopf’s channel has over 80 million views and more than 1.77 million subscribers.

She is a member of David Dobrik‘s Vlog Squad group on YouTube.

Corinna joined the platform in 2018. She also started to play Fortnite.

In December 2019, Corinna was banned on Twitch for wearing a short-cut Chanel tank top during her birthday stream. She tweeted:

”Twitch is so lame lmfao. I got banned tonight on Twitch for wearing ‘undergarments.’”

Kopf went on to say:

”I was wearing a Chanel tank top. Girls body paint on Twitch and I get banned for that lmfao.”

Her channel was later reinstated.

Corinna said during her first stream on Facebook Gaming stream:

”I am so excited to be partnering with Facebook Gaming because they are giving me the support and tools to help take it to the next level.”

”As a female gamer, it’s so important for me to find a home that not only empowers myself, but also my community, to make a positive impact in the gaming world.”

Corinna Kopf dated Toddy Smith, a social media star with over 1.15 million subscribers to his YouTube channel and more than 2.6 million followers on Instagram.

In late December of 2018, Corinna had a short fling with Logan Paul. In January 2019, Logan and Kopf were seen cozying up to each other at a basketball game, according to The Sun.

This is interesting since in January 2018, Corinna hit out at Logan Paul for filming a dead body in Japan’s suicide forest. She tweeted at the time:

”I’m truly sickened by this Logan Paul situation. I lost my brother to suicide.”

”How insensitive and sick can you be to film someone in that state.”

Logan later said that he and Corinna were just friends with benefits.

In 2019, Kopf started to date Turner “Tfue” Tenney, a professional skimboarder who has over 10.1 million followers to his Twitch channel.

The first reports of the two YouTubers dating appeared in December 2018, after a streamer said to have seen Tfue and Corinna at a party hosted by Bella Thorne.

”To suppress any rumors, we have a very loving, healthy relationship, but ultimately the distance and a few other things made our relationship difficult.”

She later talked about why their relationship fell apart:

”We dated for like, almost a year. He only came to LA three times. I was in Florida for weeks on end.”

”Usually, long-distance relationships don’t work out if there’s not an end goal.”

On February 20, 2020, she appeared in a vlog of YouTuber Mike Majlak, where Corinna talked about her relationship with Tfue, among other things.

Corinna has a tattoo on her foot that reads, “You are stronger, I Love You.”

In January 2020, some of her followers thought that Kopf received plastic surgery after she posted a photo with plastic surgeon Dr. Sheila Nazarian on her Instagram with the caption – “No one does it better than her.”

She later clarified the rumors:

”Secondly, I’d rather be open and honest with my audience about my enhancements rather than lying/denying and creating an unrealistic standard.”

The YouTuber has eight piercings, a belly-button piercing, three on her left ear, and four on her right ear.

Kopf earned most of her wealth from posting sponsored posts on Instagram, streaming on Twitch, ads on her YouTube channel, and signing an exclusive streaming deal with Facebook Gaming.

In 2021, Kopf started an OnlyFans account, where she made $1 million in the first 48 hours.

Therefore, American social-media personality Corinna Kopf has an estimated net worth of $5 million.

READ THIS NEXT: What Is The Net Worth Of Jewel’s Mother Lenedra Carroll