Who are the most famous tuba players?

The tuba is the lowest-pitched and largest musical instrument in the brass family. The tuba was invented in the middle of the nineteenth century, replacing the ophicleide.

Here are several interesting facts about the tuba:

The tuba was invented by Johann Gottfried Moritz and Willhelm Friedrich Wieprecht on September 12, 1835.

New Orleans has more tubas per capita than any city in the world except for a small town in Bavaria named KleinstadtAmRhein.

The tuba’s sound is rich and deep, and it is the lowest-pitched instrument in the brass family.

This musical instrument is used in all sorts of music and can be found in brass ensembles, orchestras, brass bands, pop groups, wind bands, jazz groups, and even tuba quartets.

The tuba, along with the bassoons and string basses, provides the lowest sounds for the orchestra.

Early tubas had no valves, and the pitch was controlled entirely with the lips.

In Latin, the word ”tuba” means trumpet or horn.

An orchestra usually has a single tuba, however, an additional tuba may be requested.

He is a Canadian and American tuba player. Charles is the most recorded tuba performer in history.

Daellenbach is best known as one of the founding members of the Canadian Brass, in which he remains the quintet’s tuba player, professional relationships manager, business administrator, and publisher.

Daellenbach began a teaching career at the University of Toronto, where he met Gene Watts.

“For popularizing classical music, notably as a founder of the Canadian Brass, one of our nation’s most internationally renowned classical music groups,” Charles was made a Member of the Order of Canada in 2014.

He was an American tuba player who attended the National Music Camp in Interlochen, Michigan. Via his performance at Interlochen, Pilafian was awarded scholarships to study at both the Tanglewood Music Center and Dartmouth College.

Additionally, Sam was active in the jazz scene, having played with the Duke Ellington Orchestra. 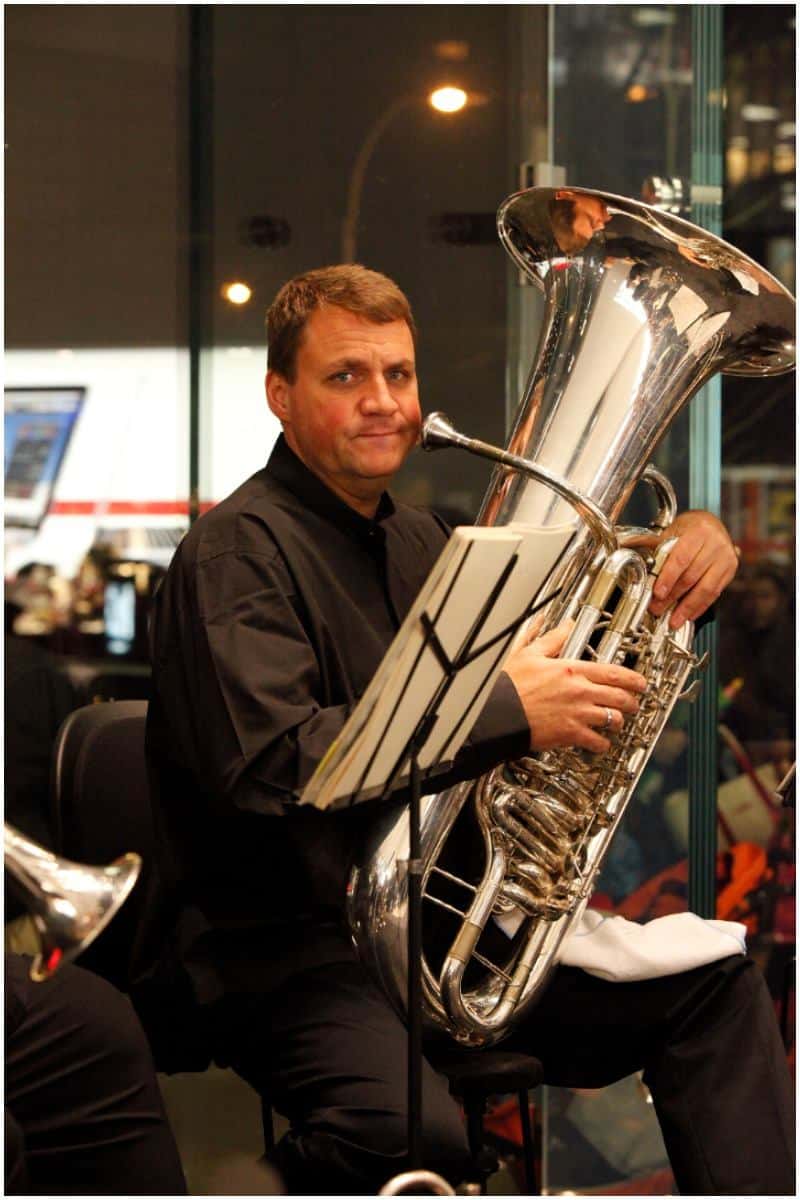 He is an American tubist who is Principal Tuba for the New York Philharmonic since 2004. Baer also completed his bachelor of music degree with Ronald Bishop at the Cleveland Institute of Music.

Baer has performed as a featured soloist, touring in the following countries: Austria, Switzerland, France, and Germany. In addition, Alan has performed and recorded with:

He is a British conductor and internationally renowned tuba soloist.

In the present day, James is the Director of Instrumental Music and University Bands at Wheeling Jesuit University, West Virginia, as well as the General Director of Pittsburgh’s own River City Brass, a professional brass band that performs around 70 concerts annually all over the United States.

Gourlay has worked with some of the world’s finest conductors, including:

After a decade at the BBC, James was invited to become the solo tubist of the Zurich Opera House Orchestra in Switzerland.

She is an American tuba player who began to study piano at age 6 and the euphonium at age 9.

In 2009, Carol was honored with a “Best of Philly” award from Philadelphia magazine. Also, she is a noted ultimate frisbee player.

Jantsch is the daughter of a Kenyon College vocal-music teacher, Nancy Jantsch. In addition to the Orchestra, Carol also teaches at the Curtis Institute of Music.

He was an American tubist who is best known for his long-running role as the tuba player for the Chicago Symphony Orchestra.

Jacobs is best remembered for his playing philosophy which he referred to as “Song and wind.”

Due to childhood illness and adult-onset asthma, his lung capacity was notably impaired.

A few books written by students about Arnold are available, such as:

He is an independent music professional from Singapore.

Cong’s work as an orchestra musician has taken him across the world, performing in numerous concert series and tours with orchestras like The Orchestra of the Music Makers, The Philharmonic Orchestra, the Asian Youth Orchestra, and the International Youth Wind Orchestra, as well as festivals that include the Alzira Spanish Brass Festival.

He is an American tubist who has written articles for the Tuba Journal and The Instrumentalist, as well as a chapter on orchestral auditions for the Tuba Source Book published by Indiana University Press.

Moreover, he has performed on several movie soundtracks, including The Fugitive, Jurassic Park, and The Nightmare Before Christmas.

He is an American tuba virtuoso and brass pedagogue who has been a guest conductor with numerous orchestras and chamber ensembles in Europe, North America, and Asia.

He is a Norwegian tuba soloist and chamber musician. Baadsvik’s international career began in 1991 when he was awarded 2 prizes at Concours International d’Exécution Musicale in Geneva.

Baadsvik studied under the tuba player Harvey Phillips and with Arnold Jacobs.