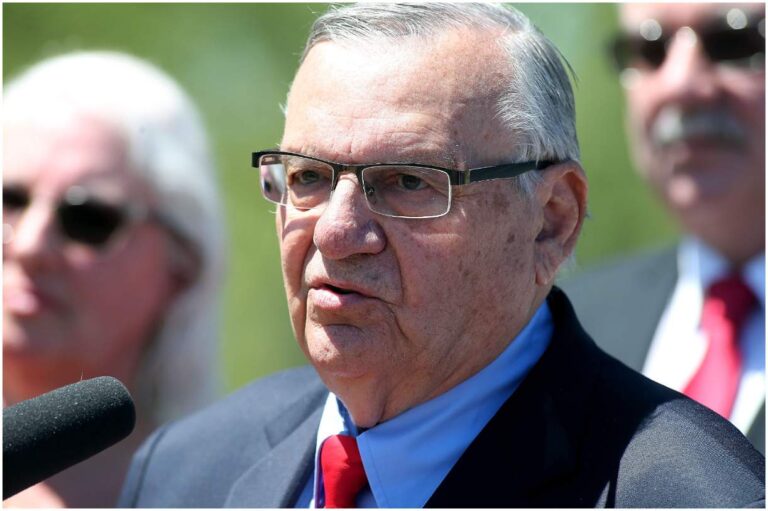 Joe Arpaio is the former law enforcement officer who served as the 36th Sheriff of Maricopa County for 24 years.

During his tenure as a sheriff, Joe forced inmates on the chain gang to wear pink underwear and set up a tent city to house prisoners in the Arizona desert, where temperatures can reach 50 degrees.

He is described as the toughest sheriff in America.

Arpaio was also involved in the investigation in attempting to disprove the validity of the 44th president of the United States Barack Obama’s birth certificate.

Arpaio was raised by his father since his mother died while giving birth to him.

He enrolled in the US Army in 1950. Arpaio served in the Medical Detachment Division.

Following his army discharge in 1954, Joe became a police officer.

For about 6 months, Arpaio served as a police officer in Las Vegas. After, he was appointed as a special agent with the Federal Bureau of Narcotics, which later became part of the DEA. Arpaio worked for the DEA for about 25 years.

In 1982, he retired from The Drug Enforcement Administration as the agency’s top official in Arizona.

In 1992, he became Maricopa County sheriff.

In 1993, Joe set up a “Tent City” as a temporary extension of the Maricopa County Jail for sentenced prisoners.

In 1995, he reinstated chain gangs in his jails. His policy applied to female inmates because he doesn’t believe in discrimination.

Note – a chain gang is a group of prisoners who are chained together to perform physically or menial challenging work as a form of punishment.

In 1997, Amnesty International said that his tent city jail was not an:

In 2000, the sheriff launched a “jail cam” website. The site received three million visitors and crashed on the first day. It showed live streams of inmates from inside the jail.

In 2007, a group of Latinos filed a class-action lawsuit claiming his policing policies amounted to racial discrimination. A federal lawsuit followed.

In 2011, after several Hispanics claimed that Arpaio discriminated against them, a United States District Court judge first issued a temporary injunction, barring Joe from detaining people solely based on their immigration status.

In September 2012, in an effort to save $100,000 on food costs for prisoners, the former sheriff implemented a vegetarian diet for inmates.

In 2013, a judge issued a permanent order, ruling that Maricopa’s handling of people of Latino descent amounted to racial profiling.

In the same year, Arpaio announced that he plans to charge inmates $1 for their meals.

“Everybody else has to pay for their food, why should [inmates] get freebies?”

In a press release, he said:

“On this day, August 25, 2019, after consultation and approval from my wife of 61 years, Ava, I have decided to run to be re-elected Sheriff.”

He said that if he were re-elected, he will re-open Tent City. In his own words:

“Once back in the office, I will use my position to restore pride to our law enforcement ranks, not only here, in the fourth-largest county in America, but across the country.”

In 2017, he was convicted of criminal contempt for ignoring a federal judge’s order to stop traffic patrols that targeted immigrants. The ruling carries a monetary fine and a possible maximum sentence of 6 months in jail.

“So was Sheriff Joe convicted for doing his job? You know what, I’ll make a prediction: I think he’s going to be just fine, okay?”

The ACLU (The American Civil Liberties Union) criticized the talk of a potential presidential pardon, saying the current US President would be undoing a conviction secured by attorneys at the Justice Department.

“‘Was Sheriff Joe convicted for doing his job?’ No, he was convicted for violating court order for discriminating against Latinos.”

A statement released by the White House said:

“Sheriff Joe Arpaio is now eighty-five years old, and after more than fifty years of admirable service to our Nation, he is a worthy candidate for a Presidential pardon.”

“I am pleased to inform you that I have just granted a full Pardon to 85-year-old American patriot Sheriff Joe Arpaio. He kept Arizona safe!”

The former sheriff has insisted that Barack Obama’s birth certificate was fraudulent and that he was not an American citizen.

On January 16, 1997, Arpaio published a book called – ”America’s Toughest Sheriff: How We Can Win the War Against Crime.”

On May 29, 2008, he published another book, titled – ”Joe’s Law: America’s Toughest Sheriff Takes on Illegal Immigration, Drugs and Everything Else That Threatens America.”

“I think the President is the boss, regardless of what you say.”

”I’m kind of an old-fashioned guy.”

”I’m elected. I don’t report to any politician.”

“If I’ve been controversial and all the threats had been after me as sheriff, just think what will happen if I’m a US senator.”

”I don’t use e-mail or u-mail or whatever it’s called.”

Arpaio earned most of his wealth from working as a sheriff for Maricopa County for 24 years. In addition, Joe worked for the DEA for about 25 years. Therefore, Joe Arpaio has an estimated net worth of $0.6 million.