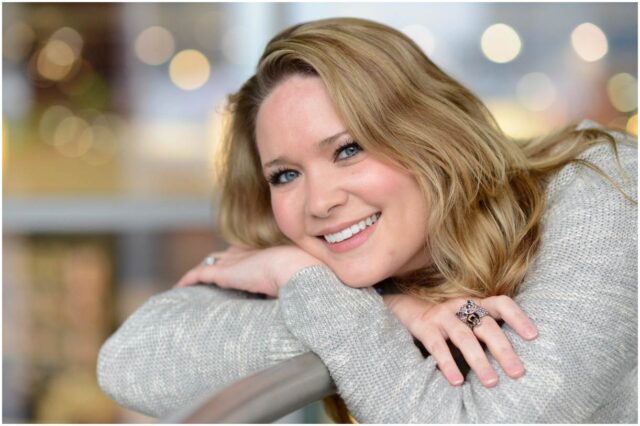 Sarah J. Maas is a USA Today and New York Times bestselling author of the fantasy series ”Throne of Glass” and ”Court of Thorns and Roses.”

“Throne of Glass is the perfect escape to a fantasy world; an epic tale with all the romance of your favorite fairy tale, the action of The Hunger Games, and the political intrigue of Game of Thrones.”

The ”J” in Sarah J. Maas stands for Janet. Her parents gave her the middle name in honor of her great-aunt, who passed away before she was born.

At age 16, she wrote the first incarnation of the Throne of Glass series.

”I’ve worked for this since I was 16, but at the same time, when your dreams do come true there’s this imposter syndrome type thing.”

Sarah uploaded the first chapters of Throne of Glass to FictionPress.com, one of the largest poetry, fiction, and short archive and a sister site to Fanfiction.net.

Her Throne of Glass series follows Celaena, a 17-year-old assassin in the Kingdom of Ardarlin who is given a chance of freedom from being a slave at the salt mines of Endovier to become the King’s assassin.

The king holds a contest where assassins, warriors, and thieves, are sponsored by a member of the King’s council to compete for the title.

The 17-year-old assassin is sponsored by Dorian The Crowned Prince. Soon, fellow competitors are being brutally killed one after another at night, and Celaena has to find the threat before it gets worse.

When Maas was asked by a fan if she would approve of the creation of a fanfic archive for the Throne of Glass series on Fanfiction.net, the author responded:

”Of course I’m okay with that! How WONDERFUL!”

In March 2010, Throne of Glass (the first book in the series) was acquired by Bloomsbury (a worldwide publishing house of non-fiction and fiction books).

The entire books in the Throne of Glass series are:

In September 2015, the Mark Gordon Company acquired TV rights for Throne of Glass.

In September 2016, U.S.-based subscription video-on-demand service Hulu announced that they were in the process of developing the television series, with Anna Foerster set to direct the first episode, and Kira Snyder set to write the adaption.

A Court of Thorns and Roses series

It is her second series. ”A Court of Thorns and Roses” is a loose retelling of Beauty and the Beast.

The series follows the story of Feyre Archeron, who is drawn into the magical world of Prythian.

The first book of the series was published in 2015.

The entire books in the A Court of Thorns and Roses series are:

It is her 3rd series overall and 1st adult fantasy series.

It is set in a world of angels, shape-shifters, and demons, where humans struggle to survive.

She got the idea for Crescent City in 2014, when she was on a plane.

The new series was launched in 2020, with the publication of House of Earth and Blood.

She met her husband on the very first day of her freshman year of college.

”Plenty of people will tell you that being published is an unrealistic goal, or what you love to write isn’t “real” literature, but ignore them.”

“You cannot pick and choose what parts of her to love.”

“We all bear scars,… Mine just happen to be more visible than most.”

”I spent a lot of time re-watching Parks and Recreation and The Office while working on the final Throne of Glass book.”

”I’m still finding the right balance of work/writing and having a life, but I do make a point to actually get away from the computer whenever I can.”

“Libraries were full of ideas—perhaps the most dangerous and powerful of all weapons.”

Maas is a big fan of the Lord of the Rings trilogy. In addition, the author has visited some of the filming locations in New Zealand, including the Hobbiton movie set.

When asked what books have influenced her work, she responded:

”There are two books … Garth Nix’s Sabriel and Robin McKinley’s The Hero and the Crown.”

Maas earned most of her wealth from selling her books.

She is best known for her two series Court of Thorns and Roses and Throne of Glass, both of which have gained substantial fan-followings in young adult literature communities and on Tumblr.

She wrote the first incarnation of the Throne of Glass series when she was 16.

Her books are published in thirty-six languages and have sold over 12 million copies.

According to the data, an author receives about $385,000 for selling 1 million book copies (after taxes, agent fee, publisher fee, etc.)

Therefore, Sarah J. Maas has an estimated net worth of $5 million.

READ THIS NEXT: Who is Vivian Howard?