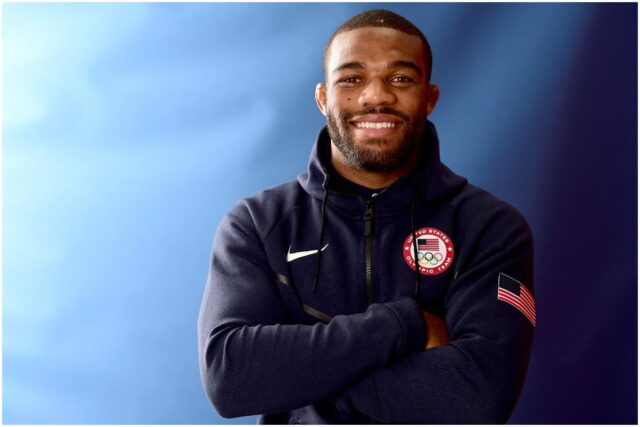 Jordan Burroughs is an American freestyle wrestler who had a 69-match winning streak.

Jordan has a brother, Leroy, and two sisters, Jenerra and Princess.

He began wrestling at the age of five.

Burroughs attended Winslow Township High School, where he became a two-time regional champion for coach Rick Koss. ”My high school coach used to always tell us, ‘You’re either getting better, or you’re getting worse,” Burroughs said. He added: ”There’s no staying the same.”

In May 2011, Jordan graduated from the University of Nebraska with a degree in sociology. During college, Burroughs was a two-time National Champion and was undefeated in his Junior and Senior seasons.

He won the 74-kilogram Olympic Gold Medal at the 2012 London Olympic Games after defeating Iranian wrestler Sadegh Goudarzi in the finals.

He was awarded the USA Wrestling’s Freestyle Wrestler of the Year in 2014.

On August 19, 2016, he lost to Russian freestyle wrestler Aniuar Geduev in the Summer Olympics’ quarterfinals.

”It was hard to think about because I had done everything right, and it still didn’t work,” said Burroughs.

In 2017, Burroughs was recognized by Sports Illustrated as one of the top 10 fittest athletes in the world.

In April 2018, he won his sixth World Cup. In the same year, he was featured in ”Journey Into Freestyle Wrestling,” a documentary written and directed by Robert J. Locke Jr.

In May 2019, Burroughs won an exhibition match in New York vs retired professional mixed martial artist Ben Askren. ”Today the MMA world and the wrestling world butted heads, and everybody loved it,” Jordan commented after the match.

”We’re better together. And we help each other give our very best self to this world every day,” he wrote on Instagram in October 2020.

In 2019, Burroughs said about his wife: ”She has come alongside me and made my journey her own. No accomplishment is ever an ‘I’ thing, it’s always an ‘our’ and a ‘we’ thing.”

They have three children together, Beacon, Ora, and Rise. ”There’s nothing harder in the world than being a dad,” he once said. ”You can’t really prepare for it.”

”Anything less than gold is a failure to me.”

”I think the best athletes in the world are the people who can control their emotions.” (Olympic Channel)

”I really like to get workouts in early in the morning, so I have time to spend the rest of the day with my family.”

”I’ve got the ability to control my destiny, and I take pride in that.”

”There’s beauty in every struggle; new life in every new day.”

”Sometimes, you have to take a moment to appreciate greatness.”

”Learn to stay two steps ahead of your opponent by anticipating their reaction.”

”Discipline, focus, endurance is what it takes to be the greatest at this sport.”

Burroughs earned most of his wealth from participating in professional wrestling tournaments. From 2011 to 2014, he won 69 matches in a row, an American record. ”Everybody makes money; not everybody makes history,” Jordan once said.

In 2012, Jordan won the 74-kilogram Olympic Gold Medal at the London Olympic Games. For his win, Burroughs received a $250,000 prize from the Living the Dream Medal Fund.

Therefore, Jordan Burroughs has an estimated net worth of $5 million.

READ THIS NEXT: Who is Garrett McNamara?