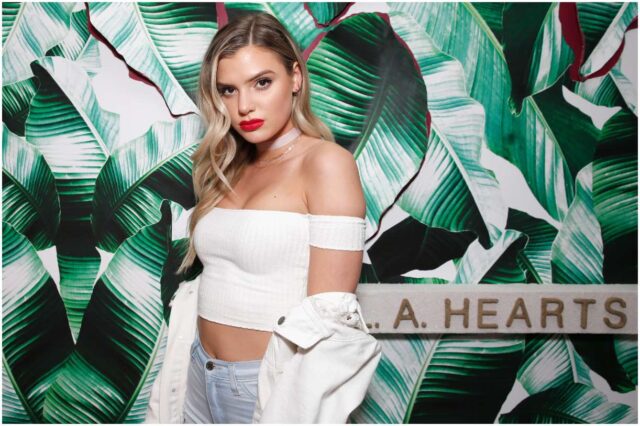 In early 2013, Violet started to post to both the 6-second video app Vine and Instagram. Alissa earned more than 600,000 followers to her Vine channel before the short-form video hosting service was shut down.

Allisa and Instagram star Piques collaborated on a Vine video together, titled – “A woman always gets what she wants…”

In June 2015, she signed with Next Models after moving to LA.

Violet was one of the original Team 10 members.

She also moved into Team 10 house. The original members of Team 10 were:

According to reports, Jake Paul and Alissa used to date. The two marketed themselves as “Jalissa.”

In 2017, she was kicked out of the Team 10 house by Jake Paul. The incident happened after Alissa hooked up with Paul Logan out of frustration at being left out of a trip with Team 10.

Jake Paul shared his side of the story with American YouTuber Shane Dawson. Jake said:

“Alissa and I always really liked each other. We were always like dating, not really. It was a rocky relationship. I wasn’t – at the time – mature enough to know how to be a boyfriend.”

“We would get into arguments and be fighting and go through ups and downs. Basically, I did a bunch of things that pissed her off and she wanted to get revenge, I guess is the word.”

“It was just me not knowing how to treat her. It was just a bad situation, we just drove each other mad.”

“I took her [Alissa] from 2,000 followers and working at Panera Bread [an American chain store of bakery-café] to 5 million followers on social media and making $300,000 a year.”

“I had chased him for so long, I wanted him to be my boyfriend.”

“We never dated officially, ever. Jalissa was fake.”

She added that Jake had hooked up with other girls right in front of her.

Paul raps, alluding to his fallout with Violet:

“And you know I kick them out, if they ain’t with the crew / Yeah, I’m talking about you, you beggin’ for attention talking s### on Twitter, too.”

The diss track is the 3rd-most-disliked video on YouTube, with more than 4.5 million thumbs downvotes.

In the song, the YouTube star admitted he misses Alissa, despite being married to internet personality Tana Mongeau.

“The fact you are still making videos about your ex when you’re married is weird homie.”

“These Days was made after a breakup. It was talking about how, a lot of times in the relationship I’d just got out of and previous ones that I’d been in, the girls would always have too much pride and their egos would be too big.”

Currently, ”These Days” has more than 3.5 million views.

Mongeau hasn’t directly commented on the situation. She only said:

”I think I’m gonna take a few day break from socials. for my brain.”

CloutGang is a collaborative group of California-based social media stars who came together in response to Paul’s Team 10.

In 2017, Alissa joined CloutGang alongside web stars Sommer Ray and RiceGum. She later moved into Clout House, a giant mansion that houses members of the CloutGang.

Violet started her YouTube channel on February 13, 2015. So far, her channel has more than 248 million views and over 3.69 million subscribers.

The couple was known as ”Balissa.”

Banks announced that they had broken up on Twitter:

”Alissa and I decided about a month ago that we should take some time apart.”

”Love that girl to death and always will. I’ll never say a bad word about her.”

Violet said that the reason for their breakup was that Banks had cheated on her several times while they were dating each other.

”I was asleep upstairs with our dogs and he wasn’t next to me so I checked our guest house and caught him naked in bed with a random girl.”

”How many scars did we justify just because we loved the person holding the knife?”

”There are certain people who aren’t meant to fit into your life no matter how much you want them to.”

”Your life isn’t yours if you always care what others think.”

”Don’t forget to remind people who the f you are in case they start getting too comfortable.”

”You will never be too much for someone who can’t get enough of you.”

”My hopeless romantic says yes but my independent woman says no.”

READ MORE: Who is David Rudolf?

In 2016, she performed the role of a woman named Kylie in the television show “The Deleted.”

Violet earned most of her wealth from sponsors and advertisements on her YouTube channel. Her channel has over 248 million views, meaning about $800k in revenue before taxes.

Therefore, Alissa Violet has an estimated net worth of $5 million.

READ THIS NEXT: Casey Holmes Net Worth