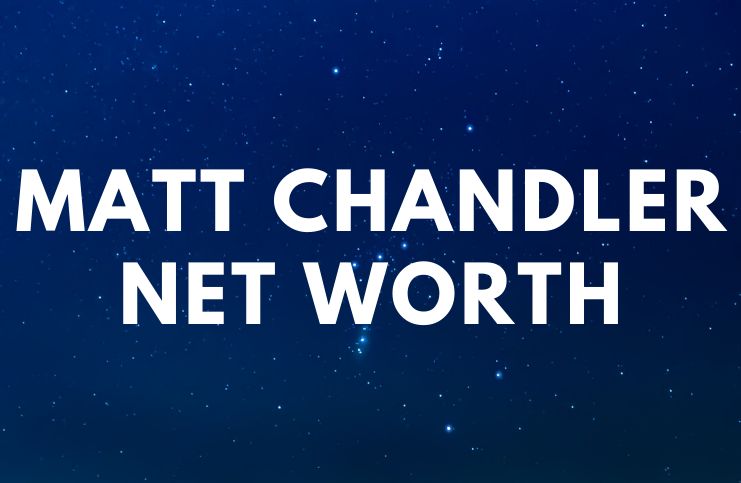 Matt Chandler is an American author and the lead pastor at The Village Church in Dallas/Fort Worth, Texas, a megachurch with more than 14,000 members.

Chandler is also the President of the Acts 29 Network.

When he was young, Matt and his family have moved a lot since his father was in the military. They lived in Galveston, Alameda, Sault Ste. Marie, and Olympia.

After high school, he had his first job as a janitor at Pine Drive Christian School in Dickinson.

In 1996, he was hired by Beltway Park Baptist Church (a Christian megachurch located in Abilene, Texas) under pastor David McQueen.

Since December 2002, Chandler serves as Lead Pastor of Teaching at The Village Church in the Dallas Fort Worth area.

The church has grown from 160 to more than 14,000 people, meeting in four locations around Dallas-Fort Worth.

The Village Church has an average growth rate of about 1,000 people a year.

Matt is the president of Acts 29 Network, a worldwide church-planting organization that includes more than 400 churches in the US and abroad.

On November 26, 2009 (Thanksgiving Day), he suddenly had a seizure and collapsed. Matt was rushed to a hospital where an MRI (magnetic resonance imaging) revealed a golf ball-size mass in his right frontal lobe. He was given two to three years to live.

After one and a half years of chemotherapy and radiation, his doctors gave him a clean bill of health.

”Astounded again at God’s faithfulness. Another clean MRI today. Hard to believe it’s been over 5 years.”

Chandler credits God for his miraculous healing. During an interview, Matt said:

”I’m not sure how men and women without a strong view of God’s sovereignty and authority over all things handle things like this.”

Matt Chandler got married to Lauren in 1999. They met at a Christian youth camp in which Matt was the camp speaker and Lauren was a camper.

During an interview with the Christian Post, he said about his wife:

”I’ve been married to Lauren for 15 years now and in those 15 years, she’s probably been three different women.”

Lauren is the author of the book Steadfast Love: The Response of God to the Cries of Our Heart. In 2012, she released her first EP of worship music, titled – ”The Narrow Place.” Lauren often leads worship at The Village Church in Flower Mound, Texas.

She once said about marriage:

”Marriage is a picture of the relationship between Christ and the church. In a Christian marriage, you have a covenant with God and each other.”

Lauren went on to say:

”That doesn’t necessarily require that both of you have to have everything perfect.”

In February of 2016, Matt and Lauren hold a marriage conference, titled – “The Mingling of Souls.”

The couple has three children, named – Reid, Norah, and Audrey.

In 2012, Chandler co-authored a book titled – ”The Explicit Gospel by Matt Chandler” with Jared C. Wilson. In the book, they explain what the gospel is and how it has been misunderstood.

On October 1st, 2012, Matt, Josh Patterson, and Eric Geiger published a book, named – ”Creature of the Word: The Jesus-Centered Church.”

On January 1, 2015, Chandler released another book, titled – ”The Mingling of Souls: God’s Design for Love, Marriage, Sex, and Redemption.”

In September 2019, he published a book, named – ”Joy in the Sorrow: How a Thriving Church (and its Pastor) Learned to Suffer Well.” In the book, he details his battle with a potentially fatal brain tumor.

”Can you give me a beautiful exposition of love your wife like Christ loved the church, right?”

”I believe the Scriptures teach that God is aware of every act at every level of the universe.”

”I want to encourage any group that might want to reduce the gospel to trust the Scriptures.”

”We have a tendency, if we’re not careful, to get stuck—to stop learning or feel like we’ve arrived in learning.”

”I don’t know that you can be as transformed by it as maybe the Lord intends.” (source)

He was strongly influenced by John Piper, an American Reformed Baptist pastor who is the chancellor of Bethlehem College & Seminary in Minneapolis and the founder of desiringGod.org.

Matt believes in Christian hedonism, a term coined by John Piper in his 1986 book Desiring God, that teaches that “God is most glorified in us when we are most satisfied in Him.”

Chandler believes that supernatural gifts such as speaking in tongues, healings, miracles, and prophecy, should be exercised within the church.

Other famous pastors in America are:

In 2019, The Village Church was hit with a lawsuit by former congregants seeking over $1 million in damages for the alleged sexual abuse of their daughter (who was 11 at the time) by a former minister at a church camp in 2012.

According to the family’s claims, The Village Church failed to “implement reasonable policies and procedures to detect and prevent the sexual abuse of Jane Doe One by Tonne,” to prevent the abuse from happening.

Matt said that The Village Church handled the allegations as best as they could. According to The New York Times, he said:

“I was dealing with it, not just as a pastor but as a dad.”

“My oldest daughter was a cabin away from where this incident – this alleged incident – took place. We called a meeting with all the parents that we knew and could find.”

Chandler earns most of his wealth from being the lead pastor at The Village Church. His salary was not released to the public, however, the salary for a lead pastor in a megachurch can go as high as $420,000.

READ THIS NEXT: Biography of Vic Edelbrock Jr.