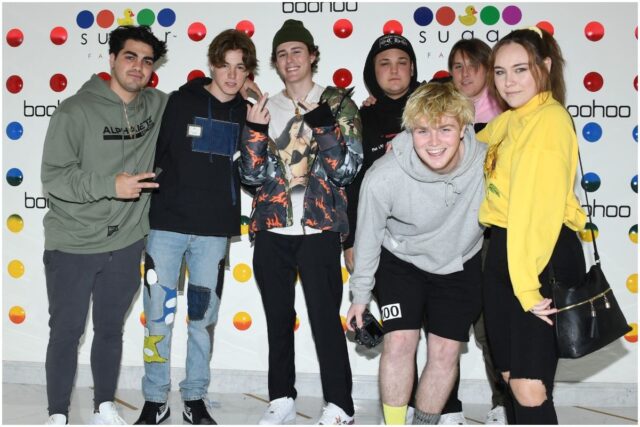 What is Thomas Petrou’s net worth?

Thomas Petrou is a US-born and raised social media star and entrepreneur, who is most famous for being part of the new generation of TikTok kids.

Petrou founded the Hype House—a collaboration squad of content creators who live in a West Hollywood mansion together.

He’s also a former member of Jake Paul’s Team 10, a prankster, an entertainer, a savvy business mind, and an uber-protective big brother.

Here’s what we know about the YouTube and TikTok influencer.

Thomas Petrou has been on YouTube since early 2015, but it took him a while to get his big break on the video streaming platform.

He slowly grew his channel to 200,000 subscribers.

Then, he took on a challenge to vlog for 3 consecutive years of his life. That garnered him more attention, and eventually, Petrou was able to grow his following to 1.9 million on YouTube.

In what could have been the opportunity of a lifetime, Petrou became affiliated with Jake Paul’s Team 10.

He joined Team 10 in May of 2019, but claimed to have been “fired for no reason” a few months later, according to an update he posted in late 2019.

Although at one point Team 10 was the biggest name in social media collaborations, the collab squad’s official YouTube channel hasn’t been updated since mid-2019, and the official website shows nobody in their current talent list.

Many of the outgoing Team 10 members cast a negative light on Paul and the Team 10 culture.

What Not To Do

Whatever the reasons for Thomas Petrou being ousted from Team 10, he clearly learned a lesson in what not to do.

By December 2019 Petrou had co-founded The Hype House with Chase Hudson.

The Hype House is designed as a collaborative incubator for social media stars—particularly TikTok content creators—and has been home to many young entertainers, including:

The #hypehouse tag began trending on TikTok within minutes of the squad releasing a corny, boyband-inspired photoshoot intro, and videos that carried the tag had amassed a total of 100 million views within a week.

Within 2 weeks the official Hype House account had over 3 million fans.

As the manager of the group, Petrou has been responsible for keeping the group on track and productive.

This meant creating rules for the house—like if you break something, you have to replace it within 15 days—and the requirement to produce social media content every day.

The Hype House is also decidedly not a party house, according to Petrou and Hudson. “It’s not in line with (…) this house’s brand. This is about creating something big.”

For most of 2020, his approach seemed to be working.

The Departure Of Daisy

Despite the collab squad’s massive success—with #hypehouse being one of the biggest trending topics of early 2020, and the house being instantly recognizable to millions of TikTok fans—Daisy Keech announced her departure from the squad in February of that year.

She then released a video airing her grievances with Petrou, who she claimed didn’t give her credit as a co-founder of the group.

Petrou responded with receipts for payments Daisy claimed she had made, and his side of the story.

After much back and forth—despite both Petrou and Keech claiming they wouldn’t be talking any more on the topic—it was also revealed that Keech hadn’t told a New York Times reporter that she was a co-founder during an interview with her, Petrou, and Hudson.

Another part of Daisy’s complaint was that she walked into the house to find Lil Mosey shooting a music video. She claimed she knew nothing about it, and felt she had a right to know since her name was on the lease.

Petrou responded with screenshots of a group chat where he had notified everyone about the music video—and showed replies from Keech. He also pointed out that she was not on the lease.

Here is a photo of the two.

”My amazing girlfriend, my friends I’m lucky enough to live with, everyone who has been/ is apart of the Hype House,” Petrou wrote on Instagram in November 2020. ”You’re all my best friends and I wouldn’t be here today without you all.”

Petrou earned most of his wealth from uploading videos on TikTok and YouTube as well as from sponsors.

On YouTube, Petrou has over 331 million views, meaning about $1 million in revenue before taxes.

On TikTok, Petrou has over 8.1 million followers.

Therefore, Thomas Petrou has an estimated net worth of $1 million.

Want to get to know the Hype House co-founder? Check out his YouTube channel here.

READ THIS NEXT: Who is Michael Reeves?