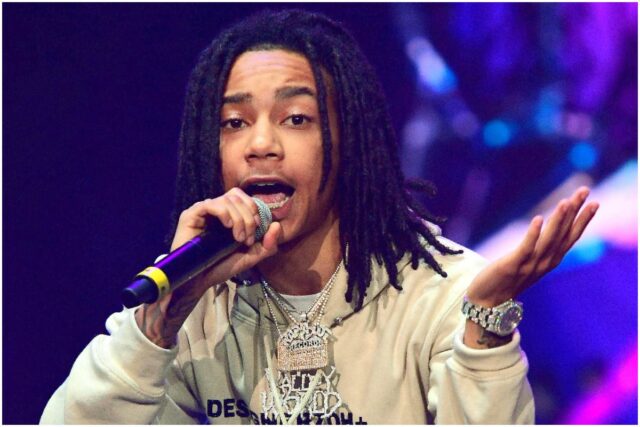 YBN Nahmir (real name – Nick Simmons) is an American rapper who gained fame when World Star Hip Hop posted his video for “Rubbin Off The Paint” on their YouTube channel on September 18, 2017.

He was born on December 18, 1999, in Birmingham, Alabama, USA, as Nicholas Alexander Simmons.

Later, Simmons uploaded videos with him playing Grand Theft Auto V on YouTube. He explained: ”I used to do GTA videos, I used to do everything.”

Nick founded the YBN Collective in 2014 after he had met Almighty Jay through playing Xbox Live. He had described the crew as “a movement” and “a family” during an interview.

On November 2, 2016, Simmons released his first mixtape, titled – ”Believe in the Glo.”

On January 21, 2017, he released his second mixtape — ”#YBN.” It featured guest appearances from YBN Almighty Jay.

On September 18, 2017, he released the song “Rubbin Off the Paint” to WorldStarHipHop’s YouTube channel. The song was initially released on his SoundCloud account in 2017, and it was recorded with a $50 mic.

”I always had the mindset that it was going to hit a million but I ain’t never expect it to hit 2 million, so shit it is what it is, now that hoe blowing up it’s like at 110 million on YouTube,” Nahmir said in 2018 for Vice.

Currently, the video has over 187 million views. It peaked at #46 on US Billboard Hot 100. In May 2018, the song was certified gold by the RIAA. He used the financial success of “Rubbin Off the Paint” to move himself to LA.

On January 23, 2018, he released another song, titled – ”Bounce Out With That.” The video was directed by Cole Bennett — the founder of ”Lyrical Lemonade.” As of September 2020, the song has over 158 million views on YouTube.

On August 6, 2020, Nahmir announced on Twitter that the YBN Collective had officially disbanded. He said: ”They left this YBN shit in the gutter.” Nahmir added: ”Remember that. I’ll turn it up myself.”

Following the break up of YBN Collective, Simmons released a new single titled ”Pop Like This” featuring Yo Gotti.

Starting in 2018, YBN Nahmir is dating Alycia Tyre, a social media celebrity who has more than 1.7 million followers on her Instagram account (sahlt_).

Simmons tweeted in February 2019: ”I miss my girlfriend.”

”Don’t judge people on their words, but instead their actions.”

”You earn trust through honesty.”

”You don’t need to be anything that you’re not.”

”Trust me, all of your hard work gonna pay off.”

Simmons earned most of his wealth from releasing three mixtapes (one with YBN Collective). Nahmir also makes money from advertisements on his YouTube channel, which has over 137 million views (about $300,000 in revenue, before state taxes).

In addition, he occasionally posts sponsored posts on his popular Instagram account (3.9 million followers). Therefore, rapper YBN Nahmir has an estimated net worth of $1.5 million.

READ THIS NEXT: Who is Navarone Garibaldi?