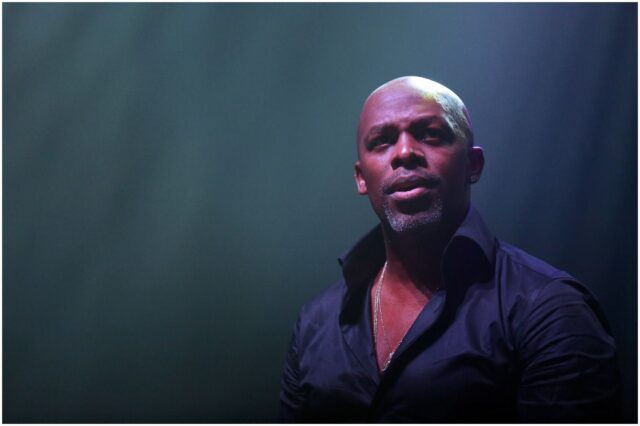 Joseph Lewis Thomas, often credited simply as Joe, is an American record producer and R&B singer-songwriter who released the album ”My Name Is Joe,” that was nominated for 7 Grammy Awards between 2000 and 2002.

His parents were both ministers in the Pentecostal Church, a renewal movement in the Christian church. Since he was the son of two preachers, Joe spent much time in church playing guitar, singing, and directing the choir.

During an interview, Joe recalled about his childhood:

“[The church] was my whole life. I did nothing else.”

Thomas went on to say:

”In high school and growing up, [my parents] weren’t having it any other way. ’Forget about parties and hanging out. You’re going to church.’”

In 1990, he graduated from Opelika High School. After his graduation, he worked at a gospel record store. In addition, Thomas continued his music education through a local church.

In 1992, Joe signed a record deal with Polygram Records, a Dutch major music record label and entertainment company. Polygram Records was founded in 1962 as the Grammophon-Philips Group by German Siemens and Dutch Philips.

In 1996, Thomas contributed the song “All the Things (Your Man Won’t Do)” to the soundtrack of ”Don’t Be a Menace to South Central While Drinking Your Juice in the Hood,” an American crime comedy film.

In 1997, after signing with Jive Records, “All the Things (Your Man Won’t Do)” was included as the opening track on his 2nd studio album ”All That I Am.”

In the mid-1990s, he sang on the remix of Big Punisher’s “Still Not a Player.” In addition, Joe sang a remix of Tina Turner’s single “Something Beautiful Remains” from her album Wildest Dreams (1996). Also, Joe remixed a duet by Tina Turner and Barry White titled – “In Your Wildest Dreams.”

In April 2000, he released his 3rd album, called – ”My Name Is Joe.” The album produced three singles, including:

In 2001, Joe’s fourth album, Better Days, was released. It became his 2nd album to receive a Grammy nomination in the Best R&B Album category.

Thomas’s 6th album – ”Ain’t Nothin’ Like Me” was released in April 2007. The album featured guest appearances by rappers:

”Ain’t Nothin’ Like Me” was produced by Sean Garrett, Bryan-Michael Cox, Cool & Dre, Tank, and Stargate.

In March 2014, Thomas signed a distribution deal with BMG Rights Management, an international music company that is based in Berlin, Germany.

”Good songs don’t age, and my objective each time out is to write and sing good songs.”

”I guess you could say I’m sort of old-fashioned in my approach because trends can come and go and my goal is to write songs that last.”

”To me, whenever you meet someone and your homeys with them that’s just how it is. That’s Suit or Soul, man!”

“I feel like if you have a queen, you should treat her like a queen. I feel she doesn’t deserve anything less than that.”

Thomas collaborated with Mariah Carey on songs such as:

His albums “My Name is Joe” and “All That I Am” are both certified multi-platinum selling CDs.

Joe produced albums for several bands and artists, including:

He has been nominated for numerous awards, including four Soul Train Music Awards, an NAACP Image Award, and a BET Award. Additionally, Thomas is a 7-time Grammy Award nominee.

READ THIS NEXT: Jadyn Rylee Net Worth