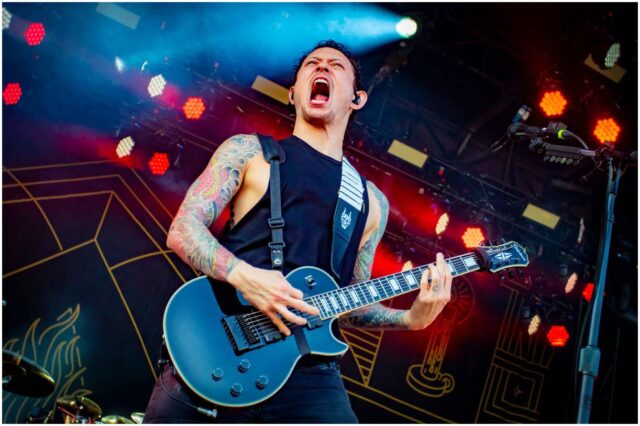 Matt Heafy is a Japanese American musician who has performed with a music group called Capharnaum.

Heafy is best known as the lead vocalist and guitarist for the heavy metal band Trivium.

In addition, Heafy regularly streams on his Twitch channel ”matthewkheafy,” as well as is a practitioner of Brazilian Jiu-Jitsu.

Matt is the son of a Japanese mother. His father is half German and half Irish and a former member of the US Marine Corps.

Heafy spent the first year of his life in Japan. Then, his family moved to Orlando, Florida, USA.

At around age 11, Heafy auditioned for a local band called “Freshly Squeezed.” During the audition, he played the Blink-182 song Dammit (the second single from the group’s second studio album, entitled – Dude Ranch). But, following his audition, Matt never got a follow-up call back.

During an interview, he explained:

”I initially tried out for a pop punk back in 7th grade; my tryout song was “Dammit” by Blink 182.”

”I thought I was pretty decent, but unfortunately I never got the call back and never made it into that band.”

Matt was almost completely self-taught and did not know formal music theory.

“Self-taught for quite a bit of it, did lessons on and off for maybe two or three years, but I do not know anything formal music on guitar.”

”I do on saxophone though…but that doesn’t help me on guitar.”

In 2015, Heafy started taking formal training for the guitar.

At age 12, Matt was accepted as lead guitarist in Trivium, despite the fact that other members were around age 16 at that time.

His debut with the band included his compositions of:

In addition to keeping the position of lead guitarist for Trivium, Matt agreed to become a full-time lead singer for the band.

During an interview, he explained:

”After trying out for the band in 1999, I made it in. Ever since then, Trivium has been my first band and first job.”

For the song “Betrayer” off their 8th studio album, 2017’s ”The Sin and the Sentence,” Trivium is up for Best Metal Performance.

“To hear we were getting not only a Grammy nomination but a nomination for that song makes me so proud, because it has screaming and key changes and is so extreme.”

READ MORE: What is the net worth of Robert Plant?

On September 15, 2018, they announced they were expecting twins.

In 2018, he had to exit Trivium’s tour due to his wife’s impending birth of the couple’s twins.

Matt said in a video message:

“I just had to fly back unexpectedly home to Orlando.”

Heafy went on to say:

”As you all know, my wife and I are expecting twins and as you also know, with pregnancy, there are no definitive answers on when things are happening – especially when it’s two.”

On his Twitch account, he also does vocal warm-ups and guitar clinics, as well as shows his Brazilian jiu-jitsu classes.

He has a younger sister who covers video game music on her YouTube channel.

In 2015, he contributed to ”Metal Allegiance,” an American heavy metal supergroup that was formed on Long Island, NY, in 2014 by Mark Menghi.

Heafy made guest appearances in the music videos for:

Matt does not speak Japanese fluently, but he has mastered some of the basic phrases which he uses during his concerts in Japan.

His style was mostly influenced by bands such as:

In 2006, at the Download Festival, when Korn’s lead vocalist Jonathan Davis fell ill, Matt handled vocals for the band Korn.

James Hetfield (Metallica frontman who was named the eighth greatest metal guitarist by Joel Mclver) was one of Matt’s major musical influences.

Heafy earned most of his wealth from being the lead vocalist for Trivium.

In addition, Heafy streams daily on Twitch. On this platform, he has around 2,800 subscribers (around $7,000 in revenue per month).

Therefore, American musician Matt Heafy has an estimated net worth of $3 million.

READ THIS NEXT: Who was Tiny Tim?