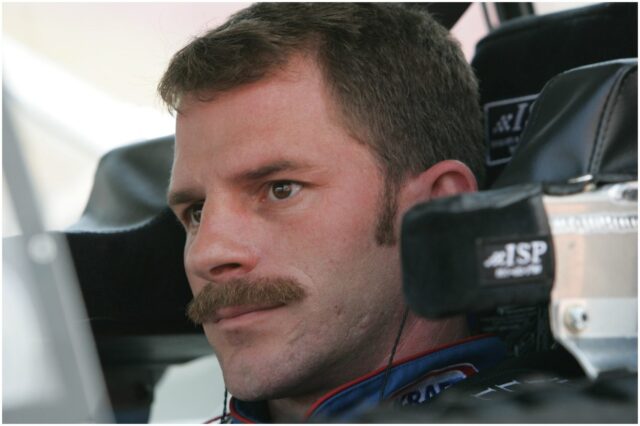 What is Kerry Earnhardt’s net worth?

Kerry Earnhardt is an American NASCAR driver who worked for his family’s business, Dale Earnhardt, Inc., as a consultant in driver development.

He is also known for his physical similarity to his father. In addition, Kerry raced in both the Nationwide and Sprint Cup series as well as in the series for Curb-Agajanian.

His parents divorced when he was only one year old.

After the divorce, his mother married Jack Key, who adopted Earnhardt.

He used his stepfather’s last name for a good part of his life.

In the early 1990s, he had driven race cars. More specifically, in 1992, Kerry entered the racing world as a competitor in racing street stocks. In the same year, Earnhardt was the Rookie of the Year.

In 1993, he raced in the NASCAR Goody’s Dash Series. He won the following races – Langley Speedway in Hampton, Virginia and the East Carolina Motor Speedway near Robersonville. Earnhardt scored two top 5s and 8 top 10s in 11 races.

In 1998, Kerry won his first NASCAR – in the Busch Series at Myrtle Beach.

In 2000 and 2001, Kerry raced in the Automobile Racing Club of America’s ARCA Racing Series for Dale Earnhardt, Inc. (the company was founded by Dale Earnhardt and his wife), using DEI Winston Cup Series equipment.

In October 2001, he was involved in a massive crash in an ARCA race at Charlotte Motor Speedway. In the same year, his father was killed at Daytona.

In 2004, Kerry made 8 starts in the K&N Pro Series West for Bill McAnally Racing, scoring five Top-10s and two Top-5s.

In 2004 and 2005, Earnhardt raced in 6 Nextel Cup races, for Richard Childress Racing (an American professional stock car racing team that is based in Welcome, North Carolina) in the No. 33 car. His highest finish was a 17th-place run at Talladega in Aaron’s 499.

In 2005, he won the pole for the Florida Dodge Dealers 250, however, Earnhardt lost his ride after two races due to a lack of sponsorship.

In the following season, he signed with ThorSport Racing and drove the No. 13 Chevrolet the full season. His best finish of the season was an 11th at Nashville and Las Vegas.

In December 2007, Earnhardt announced that he had retired as a competitive driver, however, he is still an active test driver.

Kerry Earnhardt got married to Rene in 1999.

The couple helped design and promote the “Earnhardt Collection” of homes built by Schumacher Homes.

“Rene and I have worked extremely hard to develop the Earnhardt Collection brand and make it uniquely ours.”

Kerry and Rene have a daughter named Kayla.

In addition, Kerry has two sons named Jeffrey and Bobby from a previous marriage. His sons are both race car drivers.

His younger son, Jeffrey, started to race for DEI in 2007. On May 22, 2012, he made his amateur debut in mixed martial arts. His first race came at Wythe Raceway in Rural Retreat, Virginia.

In 2017, Bobby Earnhardt raced part-time in the ARCA Racing Series, driving the number 96 Ford for Brian Kaltreider Racing and the number 3 Chevrolet for Hixson Motorsports.

On May 21, 2017, Bobby made his major stock car debut in the ARCA Racing Series, driving the No. 3 Chevrolet for Hixson Motorsports.

Bobby currently competes part-time in the NASCAR Xfinity Series, driving the No. 66 Toyota Camry for MBM Motorsports. Bobby started 24th and finished 21st after a crash on lap 165.

”I wasn’t her son, but she treated me like I was. Heaven got a little more exciting with this angel! Love to my sister, brother, and Meredith, I know she’s already missed.”

”I’m the same age as Dad was when we lost him, makes this year harder. I haven’t accomplished 1/2 of what Dad had, then again I don’t think many people can match what he did or the people he touched.”

”If you live in our neck of the woods and in the market to build, gotta come to check this out! Regardless, what or who you build with, it’s worth seeing!”

Dale Earnhardt Jr. went into his first race with a car he co-owned with his half-brother Kerry. Dale won the Daytona 500 in 2004 and 2014 and the Busch Series Championship in 1998 and 1999. Currently, Dale Earnhardt Jr. is a retired NASCAR racer and became an analyst for NASCAR on NBC.

In 2016, Kerry drove a No. 3 1995 Chevrolet Monte Carlo, one of his father’s original race cars, at the Goodwood Festival of Speed in England.

Kerry draws a strong resemblance to his father and 7-time Winston Cup legendary Dale Earnhardt. In 2010, he was inducted into the NASCAR Hall of Fame. Dale Earnhardt won 7 Winston Cup Series Championships as well as the 1998 Daytona 500.

In 2001, after he made contact with Ken Schrader, Dale Earnhardt died after a hard, head-on crash against the retaining wall on the final lap of the race.

Kerry’s last appearance in a national touring series was the NNS’ Subway Jalapeño 250 on July 3, 2009.

Earnhardt earned most of his wealth from being a NASCAR driver. After he retired, Kerry and his wife started to design the “Earnhardt Collection” of homes built by Schumacher Homes.

In May 2016, Kerry was sued by Teresa Earnhardt for using the Earnhardt name in his business venture.

Therefore, Kerry Earnhardt has an estimated net worth of $1 million.