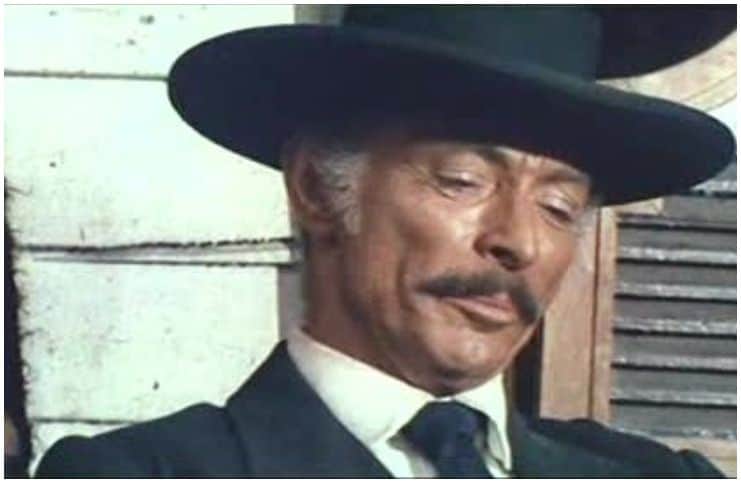 Lee Van Cleef was an American actor who played a villain in The Man Who Shot Liberty Valance. His piercing eyes and sharp features made him an ideal “bad guy.”

In 1966, he starred as the villainous Angel Eyes in the classic film – ”The Good, The Bad and the Ugly.”

His parents were both of Dutch ancestry. In addition, Lee had distant German, English, Belgian (Flemish), Swedish, and French roots.

From 1942-46, he served in the US Navy (during World War II). There, he was assigned to a submarine chaser and then to a minesweeper, USS Incredible.

After World War II, Lee worked as an office administrator, becoming involved in amateur theatrics in his spare time.

In 1952, he got his first role in the Western classic – “High Noon,” as the bad guy who died in the showdown gunfight with American actor Gary Cooper.

The plot of the film centers on a town marshal who is torn between his love for his new bride and his sense of duty as he must face a gang of killers alone.

High Noon was directed by Fred Zinnemann and produced by Stanley Kramer. John Wayne was originally offered the lead role in the High Noon.

Also in 1952, he appeared in Kansas City Confidential, a crime film directed by Phil Karlson. In the same year, Van Cleef appeared in the episode “Formula for Fear” of the Western aviation series Sky King.

In the follow-up year, Lee performed in Vice Squad, a film directed by Arnold Laven.

In 1959, he appeared as Luke Clagg in the episode “Strange Request” of the series Riverboat.

In 1963, Van Cleef starred in “The Day of the Misfits” on American western television series The Travels of Jaimie McPheeters.

The Good, the Bad and the Ugly

Upon release, the film received criticism for its depiction of violence. The film was a financial success, grossing more than $25 million at the box office.

It is an Italian-led production with co-producers in the United States, West Germany, and Spain.

Other stars from ”The Good, the Bad and the Ugly” are:

It was released on VHS by VidAmerica in 1980.

In 1981, Lee appeared in the cult classic film Escape From New York.

In 1984, Van Cleef was cast as a ninja master in the NBC adventure series The Master.

On July 13, 1976, Lee Van Cleef married Barbara Havelone. The couple was married until his death.

From his marriage to Patsy Ruth Kahle, Lee had three children:

With his 2nd wife Joan Marjorie Drane, he had adopted a daughter, named – Denise.

He passed away in Oxnard, California on December 16, 1989. He was 64. The cause of his death was a heart attack. His death certificate gave throat cancer as a secondary cause of death.

Van Cleef was interred in Forest Lawn Memorial Park Cemetery in Hollywood Hills, with the following inscription on his grave marker:

”I don’t care where I work. Films are an international business – not an American institution.”

”Audiences just naturally hate me on screen. I could play a role in a tuxedo, and people would think I was rotten.”

”My story suddenly turned into a rags-to-riches saga. And just in time, too.”

”Being born with a pair of beady eyes was the best thing that ever happened to me.”

”Movies are full of leading men, most of whom aren’t working. It’s much harder to find a good villain.”

He starred in two films nominated for Best Picture Oscar:

In 1959, Van Cleef was involved in a car accident in which he lost his left kneecap.

He was portrayed as a bounty hunter in the Lucky Luke comic book “The Bounty Hunter.”

While building a playhouse for his daughter, Lee lost the tip of the middle finger on his right hand.

When performing in westerns, his characters often use customized firearms, such as pistols and rifles with increased ammo magazine, fire rate, precision, and additional muzzles.

He was awarded the Good Conduct Medal and the Bronze Star.

Van Cleef earned most of his wealth for performing in 173 films over a 38-year span. He was usually cast as a villain.

For appearing in Per qualche dollaro in più (1965), Lee received $17,000 (about $137,000 in the present day). Therefore, at the time of his death, actor Lee Van Cleef had an estimated net worth of about $2.6 million (in accordance with the current inflation).

READ THIS NEXT: Who is Vicki Lawrence?