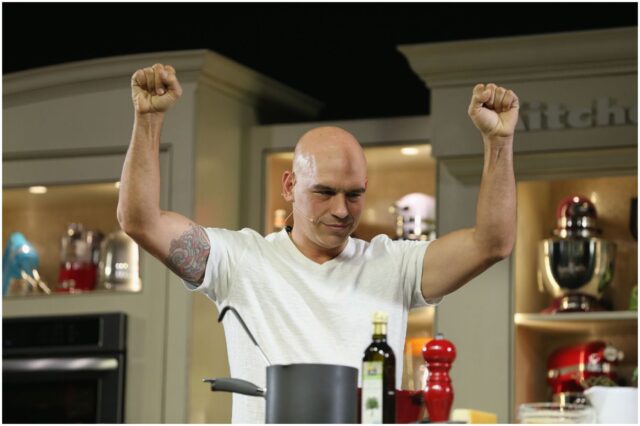 What is Michael Symon’s net worth?

Symon was the host of Dinner: Impossible’s fifth season. Also, Michael appeared regularly on Iron Chef America and The Chew. In addition, he was a commentator on the cooking show The Chew.

Michael is the son of Dennis Symon and Angel Symon. Symon has Sicilian, Italian, and Greek descent.

In 1990, Michael attended the Culinary Institute of America in Hyde Park, New York.

Later, he returned to Cleveland and started to work at The Caxton Cafe, Giovanni’s, Picolo, and Mondo.

”When I first opened a restaurant 22 years ago, I never thought about whether or not there was a good place at the location where someone could take a picture on Instagram.”

In 2005, Symon converted Lola into Lolita. In 2006, he reopened Lola in downtown Cleveland.

In the same year, he opened a third restaurant, Parea, in New York City.

On August 27, 2007, he appeared in the “Cleveland, OH” episode of the TV series ”Anthony Bourdain: No Reservations.”

In autumn 2008, Michael opened ”Roast,” a restaurant at the Westin Book Cadillac Hotel in Detroit, Michigan. He said:

”My first restaurant outside of Cleveland was Roast, which is still there in Detroit since 2007. It’s a wood-fired meat house.”

In 2011, he opened two BSpot locations, one in Westlake and another in Strongsville.

In 2012, he was paired with American actress and producer Eva Longoria for promoting Pepsico’s Lay’s potato chip named – “Do Us A Flavor.”

On June 25, 2012, in partnership with The Paradies Shops and United Concessions Group, Michael opened a Bar Symon in Pittsburgh International Airport-Airmall.

On November 21, 2015, Michael opened Symon’s Burger Joint in Austin, TX close to The University of Texas.

In the follow-up year, he opened Mabel’s BBQ on East 4th Street.

In May 2017, Michael opened Angeline at the Borgata Hotel Casino & Spa in Atlantic City.

In 2016, it was announced that Donald Trump is banned from dining at any of chef Symon’s acclaimed restaurants.

During an interview, Michael said:

“I’ve been fortunate or unfortunate enough to meet him through the years and I’m not going to lie, he creeps me out a little bit.”

Symon went on to say:

“There’s not a chance I’d let him into one of my restaurants.”

His released books are:

Symon said about his wife:

”When I first met Liz, she was one of my favorite people to be around, and she still is.”

Liz is a vegetarian.

Symon has one stepson, named Kyle.

“Ever since I was a little boy, Greek yogurt has been a staple in my kitchen.”

”Jonathan Waxman and Alice Waters. Those are the two that I’ve always looked up to the most.”

”I will always give my opinions based on experience and what I have learned.”

”My summer cocktail is Knob Creek Rye with a little splash of Aperol on ice.”

In 2019, longtime friends Symon and American celebrity chef Bobby Flay competed against each other on Food Network’s BBQ Brawl: Flay vs. Symon.

”Well, we’ve been good friends for a really long time and it was something I had been talking to the network about in terms of like a barbecue competition.”

In 2010, Symon was the first chef ever to host the annual Farm Aid benefit concert.

Michael has the words “Got Pork” paired with 2 pink pigs tattooed on his chest.

His grandfather was an inspiration for his love of food.

Michael was featured on the Food Network programs ”The Best Thing I Ever Ate” and ”Food Feuds.”

His wife is a vegetarian.

In 2005, Michael was named one of the top five new chefs, by Food & Wine magazine.

In 2000, Gourmet magazine chose Lola as one of “America’s Best Restaurants.”

He is credited with helping to “save” the restaurant scene in Downtown Cleveland.

Symon earns most of his wealth from his chain of restaurants. So far, he has open – Angeline at the Borgata in Atlantic City, Roast at the Westin Hotel in Detroit, Bar Symon located at the Washington Dulles International Airport, Mabel’s BBQ in Cleveland, three locations of B Spot Burgers, and Lola.

His business rakes over $62 million per year. In addition, Symon has published several books.

Therefore, American chef Michael Symon has an estimated net worth of $7 million.

READ THIS NEXT: Who is Steven Rinella?